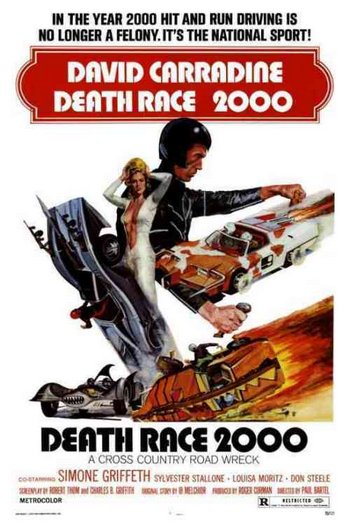 Death Race 2000 is something I saw while perusing Netflix and watched it for two reasons. First, the title of the movie is just plain cool, and second was made in 1975. And I have a thing about movies from the 70s. For some reason there's a lot of movies from that era that I really like.

I had absolutely no idea Sylvester Stallone was in this movie until I watched it. And when I saw him suddenly as one of the lead characters, that surprised me. Didn't expect that. And he acts exactly as you would expect him to.

So anyway, this flick is about a dystopian future where the national pastime is a cross-country race where racers can actually score points for hitting and killing citizens. While watching this I thought it was just going to be totally stupid all the way through, but the funny thing is that I actually started getting into the plot. And strangely enough, it wasn't really that bad. For some reason this flick strikes the right balance between being totally dumb yet keeping just enough twists in the storyline so you keep watching to find out what happens.

I think what I liked best is that every time you think you know who the bad guy is, in comes a twist, things change and you're kept guessing, but in a good way. And then at the end it actually all works out in a satisfying way.