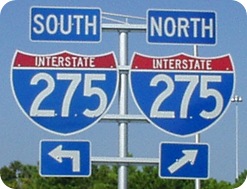 I am admittedly a road geek. Even before I discovered GPS in 2005 I was always fascinated by how roads, highways and interstates work in the US. In particular I like learning about road history because it almost never goes according to plan.

Just to show you an example of the lengths road geeks will go to, there is an entire web site dedicated to Interstate 275 in Florida appropriately titled Interstate275Florida.com.

Am I interested in web sites like this? Darn right I am. 🙂 I haven't read too much on it yet but plan to fill my brain with useless info no one cares about save for road geeks such as yours truly. I mean heck, the guy who runs this site even includes a section on the call boxes. I've never known anyone that's used one of these because everyone has a cell phone these days.

Speaking of which, all you have to remember if you break down (and don't have AAA) is *FHP (i.e. *347). You dial that on your phone and get connected to Florida Highway Patrol. I only had to call them once so far to report an 18-wheeler that was driving with a flat tire and didn't know it.

For those not familiar with the Tampa Bay area of the Sunshine State, the roads here will mess with your head a bit.

In where I used to live in New England, major roads revolve around "arteries". For example, here's Connecticut: 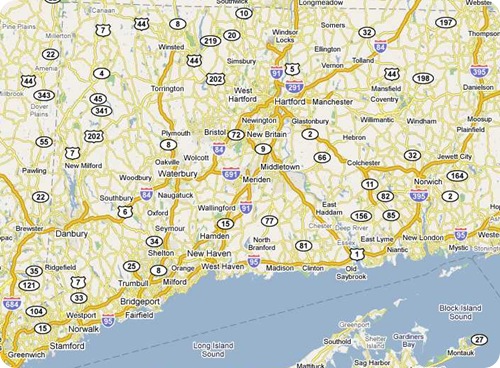 You'll notice that at Hartford is essentially where everything connects. That is the "artery". You've got I-84, I-91 and a few three-numbered interstate branches. All of this more or less connects together in the middle of the state. The only major interstates that don't are the 95's. 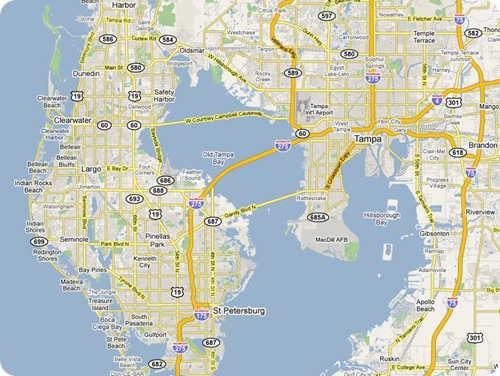 It's my opinion that this is the reason people get lost in Tampa Bay. Unfortunately there's really nothing the region can do about it; you either know the area or you don't. If you don't, get GPS. 🙂

The other day I was in a 7-Eleven right off East Busch Blvd. and this girl was asking the clerk where I-4 was. She had been looking for it all day (according to her) and absolutely could not find it.

The locals know I-4 is just a hop on 56th Street and you'll see the signs for it. Or you can just get on I-275 southbound and get to it that way. But the crazy thing is that she was so close to I-4 and didn't even know it.

I suppose this is the same no matter where you are in the US. Back in Connecticut I used to have discussions with friends talking about the best way to get across the state with minimal hassle. Unfortunately there is no hassle-free route in those parts.

I'll put it to you this way, Kat (good friend of mine) was on the west side of the state and I was on the east side when I was living in CT. She must have tried at least 5 different ways of getting to my house. Each way sucked. Some more than others. The only one I think she didn't try was skimming the southern coast, picking up I-95 to I-395 north. And I'm 99% the reason she didn't try that was because of New Haven. Just a guess. 🙂