I'm admittedly a geography junkie and have been for years. Stats and figures about population, roads and other geographic data interests me. This started when I was living in CT and wanted an answer to a simple question: How many people are there in that state? The answer is 3.5 million, and strictly speaking of population density, CT is ranked 4th while FL is ranked 8th. What can I say, they pack 'em in like sardines in The Nutmeg State. I also have an affection for places labeled as 'off the beaten path', because they much like cities have quirky personalities to them.

I've made mention that one of the major reasons where I grew up is so disconnected from everything is because no major east/west connector exists. Well, just imagine if there were no major connector east/west or north/south. That's Florida's no-eye zone. 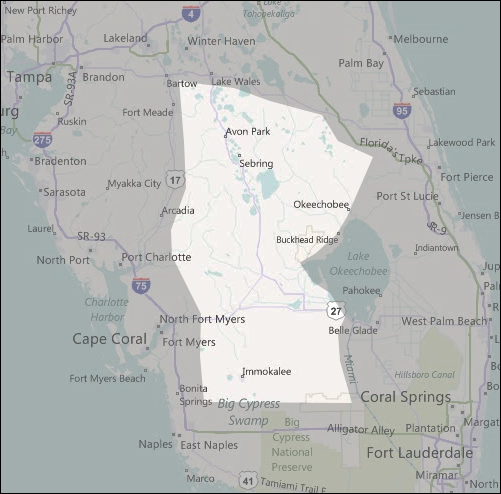 I call anywhere there are no interstates a no-eye zone. Eye sounds exactly like I, the letter used to designate interstates on maps. "No-eye" means "no interstate access". It can also mean "few to no eyes have seen this place". It could also be written as no-aye; a warning meaning "don't go there". Or you can write it in short military-ish all-caps style as NO-I.

Florida's no-eye zone starts below I-4 on the north side, is sandwiched in between I-95 and I-75 on east and west sides and ends just above the Everglades on the south side. The only somewhat-major road that exists is US-27.

One of the things CT is known for is interstates because no matter where you are, there's an interstate near, even if it's just a branch like I-395. In the no-eye zone of Florida there are no interstates and it can take you an hour or more just to get to one.

The only semi-populated areas in the no-eye zone are Sebring and Lake Placid. Other than those places, you are in no-man's land. If you wanted to visit lovely Venus, FL for example, here's the center of town. Maybe Zolfo Springs, FL? That's not exactly a happenin' place, either.

I'm not saying the no-eye zone is bad, but it is very far removed from basically everything. Some stretches are so long that you must make sure your car has a full tank of gas, else you run the risk of running out of fuel in the middle of nowhere.

Farms are what you'll see in Florida's no-eye zone more than anything else; this makes sense being the #1 industry in The Sunshine State is agriculture. From above, some parts of the zone are nothing but large blocks of fields. Outside of those fields it's all too easy to find very "lonely" roads.

Obviously it's absolutely mandatory to have GPS if you ever plan to travel through the no-eye zone. Why you would I have no idea, but if you do, don't go without one.

And no I don't plan on ever going through that zone. When the time comes that I visit the Everglades, I'll be taking the interstate, thank you very much. 🙂