from telecaster thinline to jazzmaster in less than 3 days 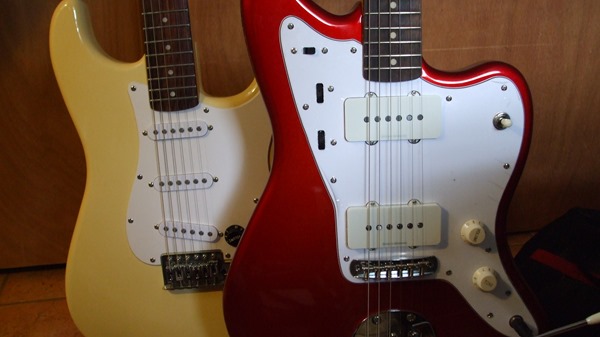 Yep, new guitar in the barn. But not after owning another one for less than 3 days first.

Okay, so here's the story. I was faced with the choice of doing one of two things. I could either a) "rebuild" my USA Fender Strat with a new Warmoth neck, electronics and tuners, or b) spend the same money on a new guitar instead.

I opted for B, and bought myself a Squier Vintage Modified Telecaster Thinline in Shoreline Gold. Here's a video of me playing it:

The Squier Thinline Tele is as close to Telecaster perfection as you can get. Everything about that guitar is 100% right, except for one very, very annoying problem. It's not grounded correctly from the factory.

What happens is that when you touch any metal on the guitar (strings, knobs or bridge), the guitar is fine and there's no buzz, it plays perfect and sounds perfect. But when you take your hands off the metal, buzzzzzzzz... I brought the guitar back for repair and a new volume pot was installed. Got it back home, and buzzzzzzz again. I swapped out the cable, checked everything and yep, it was the damned guitar that was doing it.

So I took it apart and tried to figure out the ground problem for myself. Well, as it turns out, the guitar has no ground connection to the bridge plate by design. And I also found that the shielding surrounding the controls was next to nothing, also by design.

In other words, about $150 worth of hardware is needed plus some rewiring just to get the guitar not to have ground buzz problems.

From my research on Telecaster Thinline models, you may or may not get electrical ground buzz issues just because of the way the axe is made, Squier or Fender. The 1969 design (which is what the Squier Thinline patterns after) is just one of those wonky wiring setups that even when done exactly right from the factory, it can and usually does have ground buzz problems.

I also found out the Squier Thinline Telecaster model is being phased out. Now I know why. And because of that I owned my Tele for less than 3 days.

I went back to the guitar store for a refund, but then I went home with... 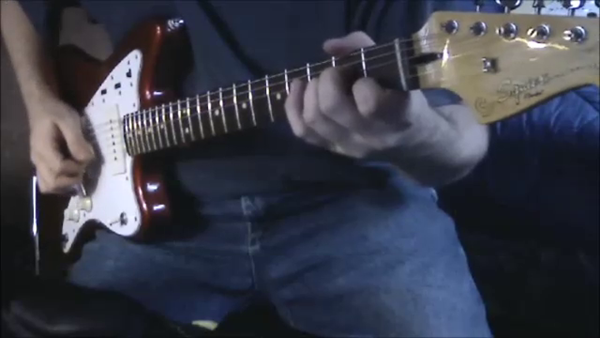 I talked about getting a Jazzmaster before. And after having a bad experience with the Thinline Telecaster, I got my Jazz in Candy Apple Red (which is the color I wanted). This is the guitar I should have bought in the first place instead of the Tele.

In the guitar store I went to (Sam Ash Tampa), they had, amazingly, three Jazzes to try out, and even a few Jags. Nobody ever has these guitars in stock, so it was very cool to play them. The Jag was even in Surf Green if you can believe it. And it was a proper Surf Green and not that "blue with a hint of green" thing.

Of the three Jazzes, one was in Olympic White, the second in Sunburst and the third in Candy Apple Red. Yep, this store had every color except for Sonic Blue. It's rare any guitar store has Jazzes to begin with, but three in three different colors? That basically never happens.

Did like the look of the white one, so I tried the sunburst. It was a buzzy, bongy, ringy mess. Not good.

Tried the red Jazz. Only slightly ringy, which is how a Jazz is supposed to be. Played amazingly well. All electronics worked - which is important because the Jazz's electronics are rather complicated.

I had the Thinline Tele with me and had made the decision that I was either going to get a refund for it or take a Jazz or a Jag home with me. I took a Jazz home, and since the price was the same as the Thinline, I didn't have to spend any extra cash. It was an even swap.

My take on the Squier Jazzmaster

Cool guitar, if you understand that the Jazz is a quirky guitar. Even more quirky than the Stratocaster.

The list of things everyone complains about with Jazzmasters

All true? Yes, but only if you play it like a Strat or a Tele. Basically, what that means is that you can't bang around on a Jazz like you could on a Strat or Tele.

1 and 2 are cured by switching over to a more flexible/flappy pick.

3 is cured by changing your playing style. You can't play a Jazz like a Strat. Change your style and you won't get bridge buzz.

4 is cured by stuffing the vibrato springs with paper towels, exactly the same as you would on a Strat to make its tremolo springs stop ringing.

As for 5, that's the fault of the player and not the system. The Jazz has a "slow" vibrato, and if you use it slow-style, it doesn't put the strings out of tune at all.

What's the best thing about the Jazzmaster?

The sound of it, of course.

In the Squier VM Jazz are a set of big, fat-ass single-coil alnico V magnet pickups; they sound great and have a tonal character that only the Jazz has.

The Jazz pickups are not P-90s. A lot of people think they are, but they're not. They are literally called Jazzmaster pickups. And they do sound different than the P-90 does.

Traditional-setup offset-body guitars from Fender/Squier (Jazzes and Jags) are guitars you either love or hate and are only meant for specific kinds of players who understand what they're all about. They are, without question, the quirkiest designs ever to come from Fender. Nothing about them is "automatic", and they require you to play them a specific way. And I like the way they play.

Yes, I am happy with my Jazz. Great sound, great feel, and unless something goes horribly wrong with the guitar, I plan on keeping it for a good long while.

And yeah, it is ironic that the Jazz, which is a much more complicated guitar than the Tele Thinline is, actually worked 100% while the Tele didn't.