As some know, I do own a 1993 Fender Stratocaster USA Standard (I am the original owner and it was bought new in '93). What people don't know is that I don't play it because the neck is broken. Not physically broken, but the truss rod snapped on the inside. I went to adjust it one day and *pop*, busted truss rod where the end of it sticks out of the neck on the headstock side.

Thinking I had done something horribly wrong, I looked up some information on this, and it turns out that truss rods popping is not an uncommon thing to happen with early 1990s USA Stratocasters.

Was I heartbroken about the truss rod breaking? No, because the guitar never played right. The 1 ("high E") string always had a buzzing problem no matter how much I adjusted the neck and 2-point bridge, the 6 ("low E") had basically the same problem, and the pickups were garbage. You know how you hear there are good and bad Strats, even for the American ones? My '93 is a bad one. It might look awesome, but plays and sounds terrible.

Eventually, I'm going to replace the neck outright, because having a luthier fix a popped truss rod is a ton of money (probably not far away from the price of a new American Standard Strat), so the solution is just to go on eBay and buy another American Strat neck. They're out there, have the Fender logo and all that, and I'll probably get a 2011 or 2012 neck. Whatever is newest that won't cost too much. The going price right now is around $325. If I bought a Mexican neck, about $225, but since it's an American guitar, I'll get the American neck with tuners.

Even after I install a new neck, the electronics still suck and have to be replaced.

The easiest way to replace electronics in a Strat is to buy a prewired pick guard that only requires the hook-up of 3 wires (output jack, which takes 2, and ground which is 1), and has everything ready for a drop-in installation. Pickups, proper volume/tone pots/knobs, 5-way switch, etc. It's all there. Just drop in, solder 3 wires (which is easy), screw down, and you're done.

Is this cheaper than installing pickups, switches and volume/tone pots individually?

No. It's really easy, but definitely not cheaper. In fact, I wouldn't recommend this for Squier guitar owners because the cost for a prewired pick guard will cost more than a Squier Stratocaster guitar itself. You can literally cut the cost by more than half by installing pickups, volume/tone pots and switches on your own.

I want to make it very clear that what you're paying for with a prewired pick guard is convenience, because the manual installation way of doing it gets you the same hardware at a lot cheaper price - but you do have to solder more stuff in and do the wiring yourself.

Here's a few that I'm considering for future purchase for my American Strat once I get the new neck installed.

(Click any pick guard below to see the price.) 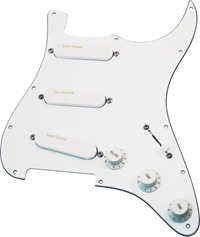 Traditional Sensor pickups from Lace have no visible pole pieces which is why they have a "plain" smoothed-over cover. This is the easiest of the easy when it comes to a prewired pick guard that has genuine Strat tone with all the right hardware included for pots and switch. There is no need to ask if this set will "sound like a Strat" or not. It will, and it will be good. Price-wise this is probably the best deal as well because you get the most for the money.

This prewired pick guard comes with three "Gold" Sensor pickups. A Gold is defined by Lace as "a classic 50's style single coil sound with a classy bell", which means it works in any position (bridge, mid or neck) alone or in parallel in the "quack" 2 and 4 positions.

In other words, if you had absolutely no clue which Lace Sensor pickup to get for a Strat, the Gold is the easiest one to go with. 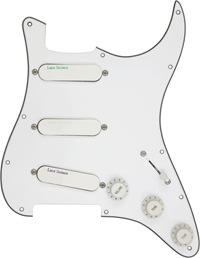 Lace defines their models of pickups by color. Instead of three "Gold", there's "Emerald" (neck), "Silver" (mid) and "Purple" (bridge).

Emerald is defined by Lace as a "Texas-inspired Tone" pickup, meaning an SRV-like sound.

Silver is defined as "a fat 70's single coil sound with increased output and more midrange". "RW" by the way means "Reverse Wound".

Purple is defined as "hot overwound single". In the bridge position it has that Deep Purple/Ritchie Blackmore sound, or if placed in the neck it sounds like a P90. Even if I bought this one individually, I'd put it in the bridge just like the prewired pick guard has it.

The price of this prewired pick guard is higher than the one with the Golds in it, but only by about 30 bucks. 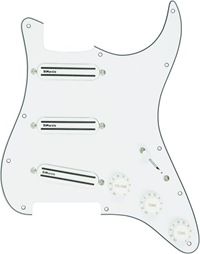 I'm going to be totally honest here - I would never buy this because it doesn't fit my music style, but I know some of you who read this totally would after I tell you about it.

In the bridge there's a DP182, which in effect is double to triple the output of a normal single coil. The midrange frequency is cranked up beyond belief as well, so even though this is a single, you'd swear it was a humbucker. That's a very non-Strat tone, but it has the punch, no question.

In the mid position there's a DP181, with double the output of a standard single coil. This one still sounds like single - on steroids.

In the neck position there's the DP188, which again goes way into the non-Strat-sounding territory by sounding like a PAF, i.e. Gibson-sounding.

In the end, having the FG2108 prewired pick guard installed turns your Strat tone into something else that heavily leans more towards an SG/Les Paul tone. For some who read this, that may be exactly what you want. I personally wouldn't prefer that and like Strat tone, but for those chasing the Gibson sound in your Fender, installing the drop-in FG2180 is the easiest way to do it.