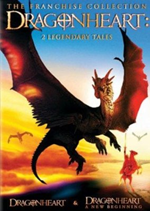 I scratched off another movie off my list I've been meaning to buy for a while, Dragonheart. This is one of the very few movies I know of that is 100% flawless. There are absolutely no mistakes in this film and to be honest I'm surprised it's not better known.

Normally when it comes to fantasy films there's always some glaring error (or two or ten) when watching it. Not so with this one. The story works. The effects are spot-on. The soundtrack perfectly matches the scenes. There are no mismatched edits. Heck, even the color is right throughout.

Even if you specifically looked in the goofs section for this film you still wouldn't see them in the movie. (And by the way the goofs for this movie is very, very short compared to other films.)

The purpose of a fantasy flick is to get immersed in the fantasy and believe the story being told is real. As far as Dragonheart goes, it nails it. The movie is simply done right. The pace is right on, you can follow it easily and well, you get the idea.

My only fear is that there is a 2nd movie included on the disc, Dragonheart: A New Beginning. I am duly convinced this flick sucks and I haven't even watched it yet. While considered a "worthy sequel", I still don't know if I want to watch it or not.. it may ruin the win that is Dragonheart.

Maybe the 2nd flick won't be so bad. I dunno. Then again it might. I guess it depends how brave I feel. 🙂