Home is where it's hotter than...

I'm not a tattoo person, but these two are pretty frickin' awesome: 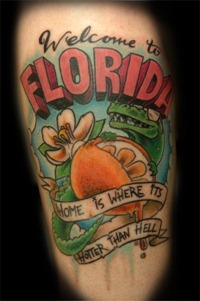 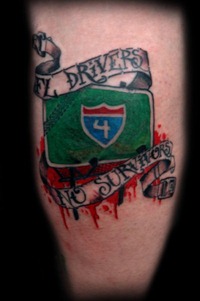 The second one will take a bit to explain the significance. It says "FL DRIVERS NO SURVIVORS" with a shield for Interstate 4 in the middle.

I-4 is the lowest-numbered interstate in the USA and is a Florida-only east/west highway. When you see 4, that's Florida and nowhere else.

Interstate 4 has, put mildly, a tumultuous history to it.

Yes, I have driven I-4. It's the fastest and easiest way to get to Orlando from Tampa. However getting on I-4 in Tampa requires you to connect to it via what's known as Malfunction Junction where I-275 hooks up to I-4. Why is it called that? Because there are traffic jams there every day in all directions during any rush hour. Outside of rush hours it's actually quite civil, but during them, well.. you're gonna wait. A long time.

I'm pretty sure the reason the guy has the I-4 tattoo is due to the 70-car pileup that happened in January 2008. That's not an exaggeration by the way. How did it happen? It was from an approved burn by the Florida Wildlife Commission. The smoke mixed in with morning fog and made it so thick that it was near-zero visibility conditions, morning rush hour happened and all hell broke loose. Four people killed, 38 injured. Fifteen miles of I-4 were closed down almost the entire day.

The I-4 pileup certainly wasn't the worst (although this might be), but yeah I suppose it does warrant a tattoo if you're into that sort of thing.