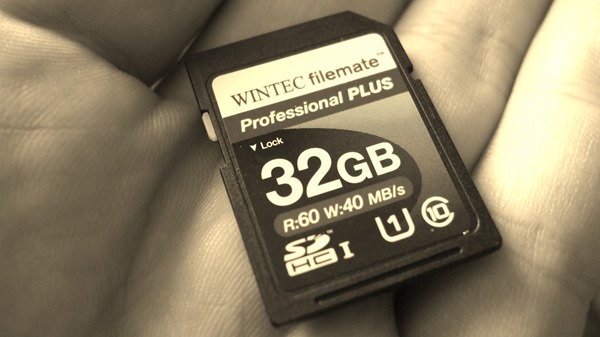 Above is a photo of me holding the 32GB SDHC card I bought (and received today) in the palm of my hand. Price paid: Exactly $25.05. That's roughly 78.3 cents per gigabyte. Not bad. Although I'm sure by mid-2014 the price will be down to 50 cents per gig of SD storage if not lower.

Just for fun I did the math on how many 1.44MB floppies it would take to total 32GB of raw capacity, and the answer is about 22,755 of them. I'm pretty sure that many floppies would fill up a garage easily.

No. A 1.44MB floppy will barely hold a single 4-megapixel image, and being that your average email is 8K in size, a floppy can't even store 200 emails. If they were plain text emails, that would be a different story and the messages would be much smaller. But just about everyone uses formatted email these days, so yeah, 8K is pretty much the average.

Do kids today even know what floppy diskettes are?

Most don't, and that's okay because there haven't been any computers made with floppy diskette drives for years.

Some kids today do know what the 3.5-inch 1.44MB diskette is and can recognize one if they saw it, but none of them know the 5.25-inch. Heck, the 5.25-inch was already old and completely phased out in the early 90s when I first started using PCs.

Do I miss the days of floppies?

No, because they were notoriously unreliable.

Actually, correction. The 3.5-inch was the unreliable one. The 5.25-inch on the other hand was always better, and that was due to three reasons.

First is the tactile experience. When you hold a 5.25-inch disk, it is physically flexible, so the thought of, "I'd better be careful with this" is sent to the brain. Just from that your disks do last longer.

Second, the 5.25-inch drives were built much better because there's really no way to build one cheaply. This is why there are 30-year-old 5.25-inch diskette drives that still run fine to this day whereas just about any 3.5-inch diskette over 5 years old drive was tossed in the trash many moons ago.

If I had to use floppies again...

...I would purposely use the 5.25-inch 1.2MB high-density flavor not only for the reliability but also because it just makes for a better tactile experience. In addition, it's much easier to store and sort them as you can put a bunch in a box made for those disks where you can flip through them like you would address cards on a rolodex.

You can, amazingly, still find new 5.25-inch disks for sale easily, but I'm assuming all the ones for sale are new-old-stock and not actual-made-this-year new.

I mean, if you're gonna use floppies, you might as well do it right and use 5.25-inch.

And no, I would not use 8-inch diskettes. That's a little too retro, even for me. 🙂