Take your time with a guitar multi-effects processor

Once you know how to modify settings on one of these things, you can make any guitar sound like any guitar.

Above is me playing some dopey metal riffs with my Squier Telecaster. I did it for the reason that a lot of guitarists state that Teles "can't do metal." Yeah, they can. All it takes is running the guitar through the correct processing and ta-da, metal sound.

However, this is the exact same guitar I got an amazing surf tone out of.

How did I do it? By sitting down with my DigiTech RP360, spending time with it and going over every single thing it could possibly do.

Multi-effect processors can't be learned in a day

Whether you use the RP360, ZOOM G1Xon, VOX StompLab or whatever you use, there is no multi-effect processor that you can learn lightning fast. It's just not possible. These multi-effect units offer tons of ways to modify guitar tone, and it does take time to learn it all.

Actually, it would be more fair to say you learn some of what a multi-effects processor does, because nobody uses 100% of what it can do. Some sounds will be cool, others will be terrible, and you just pick and choose which you like, save the presets and that's all there is to it.

You probably will only use 3 to 5 presets at most, and they will probably be "scratch made"

The standard advice given with a multi-effects processor when creating your own presets is to "start from zero" or "start blank." You either create a new blank preset, or if the unit doesn't allow that, you modify an existing preset and take every effect out of it so you start from nothing and build from there.

When editing a preset on the RP360, this is usually what I start with: 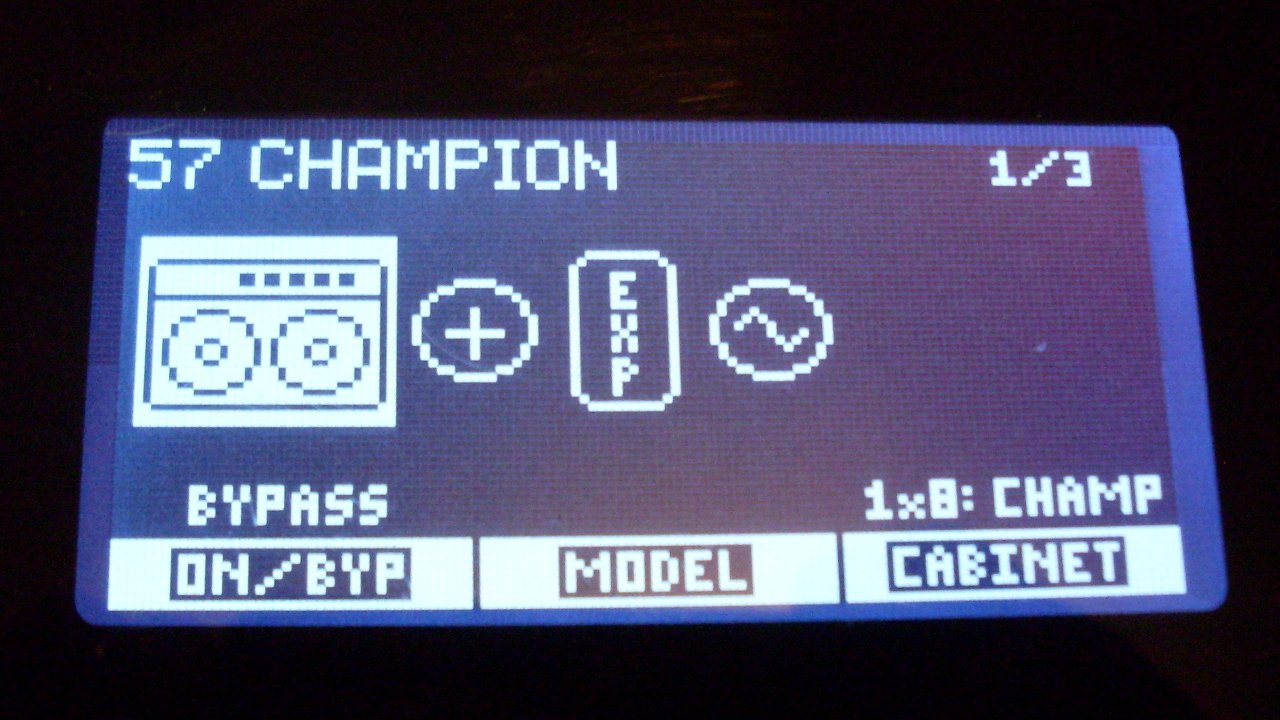 The first and only thing I put there (and only because the RP360 requires at least 1 effect per preset) is the amp-cab simulator to initially shape the tone. Nothing else is present. No EQ, no compressor, no delay, no distortion/overdrive, no reverb, no gate, no modulation, none of that. Everything starts with just the amp-cab modeling to keep it as basic as possible.

Once I've found a good amp-cab combo that I like, then I'll start adding other stuff in.

Is this a time consuming process? Yes, but it's worth it.

I only have about 5 presets that I use regularly even though I have over 10 that I customized myself. Having a lot of presets is cool, but I stick to the ones where I can just plug in my guitar, start playing and not worry about fussing around with effects processor settings.

Mess around with a multi-effects processor enough and you can get any guitar sound you want because that's what the processor is designed to do.

Buyers of multi-effect processors often say the stock presets are terrible. True? Yes! You're not supposed to simply accept the stock sound the unit gives you. You're to sit down with the unit, learn the thing and custom make your own presets that sound best with your guitar.

This is why I say to take your time with a multi-effects processor. You won't learn it in just one day, you will have to experiment a lot with it, and once you find the sound that works, that's when the magic starts happening.

On a final note, can a multi-effect processor be frustrating to use? Yes, because you have to deal with a bunch of menus among several pages of settings. But in the end, this is normal and part of the learning process. It does get easier the more you use it, so if you get a little frustrated with your effects processor, don't just give up. Sit down and learn the thing, take your time and good tones will eventually happen.