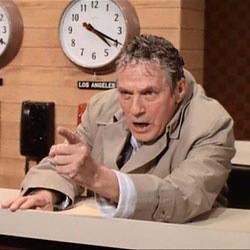 Network is a movie from the late 1970s which, shockingly, I hadn't seen until very recently. It's shocking because it's the type of film that's right up my alley especially considering my college degree is in Video & Radio Communications. Come to think of it I'm puzzled none of my professors ever mentioned Network as it is a damned good movie and shows a lot of what happens in a live television news production studio.

The famous scene from Network that people refer to (for those that know the film) is the "Mad as Hell" rant by the character Howard Beale - but when taken out of context and seen as the scene without the storyline of the film it can be lost in translation easily. It is fortunate however that even if you had seen that clip (as I had before watching it), nothing is spoiled. If anything, watching the flick fills in all the missing pieces as to why Beale ranted like he did in the first place.

Network holds a special place for me because it is set in the pre-cable era. Generally speaking there wasn't any wide availability of Cable TV until the 1980s. For example, MTV did not exist until 1981.

Imagine for a moment that your only choice for television entertainment was over-the-air. Your choices were 12 channels on VHF, of which only 9 or 10 channels had broadcasting affiliate stations, or UHF which were non-affiliated local-yokels that gave you maybe 4 or 5 more. The combined total was around 15 channels. That was it. Of those 15, less than half of those had decent reception. What that means is that in reality you only had 7 channels, most if not all of which were in the 12-channel range of VHF.

And for those of you saying, "There were 13 channels on VHF!", no there weren't because there wasn't a channel 1. Only 2 through 13, remember?

It's also important to note that home movie rentals on VHS and Betamax videocassette also didn't gain mass popularity until the 80s, so in the 70s it was all about network affiliate broadcast television and literally nothing else when talking about the tube.

By the mid-70s there were only three major affiliate broadcast television networks: ABC, CBS and NBC - all of which were media powerhouses, and as such all had gobs and gobs of cash. We're talking so much cash it was just plain obscene. Each network produced everything in-house, well before the days of freelance videographers. They had their own complete staff, studios, talent, you name it, they had it.

Today's national over-the-air networks are nothing but a shadow of what they used to be. Instead of The Big Three it's now The Big Five. ABC, CBS, NBC, Fox and Ion. "The CW" is a joint venture between CBS, UPN and WB. In fact, "CW" literally means "CBS and Warner Bros." MyNetworkTV/MyTV/MyNet/MNTV, which you also may have heard about, is owned by Fox. Ion is what you used to know as PAX when it was formerly Paxson Communications, then Independent Television and finally Ion Television. And yes they have the least viewers.

What Network tries to do is let you know how evil major broadcast television can be. Evil in the respect that you will believe anything the glowing box tells you. Evil in the way parents raise their kids on it. Evil in the way that few if any people actually question what they see on said glowing box - or in this day and age, glowing slab. I think the movie pulls it off fairly well, however it's very obvious the movie is dated.

The dated nature of the flick comes into play for the fact cable television isn't in it at all because it didn't exist as we know it back then. And it goes without saying that nobody had Internet back in the 70s.

Crazy as this sounds however, the message during several of Beale's rants do touch a nerve or two. He goes on about how the dollar is worthless and our country runs on oil. Sound familiar?

I do recommend watching the flick if for anything to see that history always repeats itself.

And for the fact seeing a 35-year-old Faye Dunaway is one of the hottest things you'll ever see in your life. When you see her, remember: No Photoshopping, no "enhancements", all woman. Knockout gorgeous.