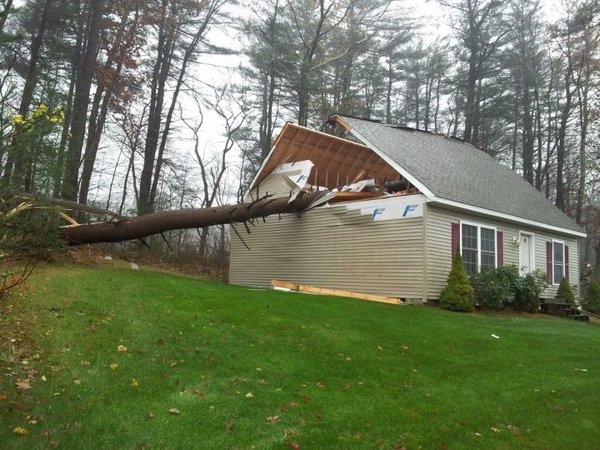 Above is a photo sent to me by a friend who lives in my home state of Connecticut.

A few months ago, I had scheduled a flight to go visit New England, and I was supposed to arrive yesterday on October 29. The flight was canceled by the airline, and I opted to take a ticket refund and stay in Florida. It's a good thing I did, because it's nothing short of incredible that I just happened to pick an arrival date of one of the worst weather disasters in history, Hurricane Sandy.

Since yesterday I've been watching The Weather Channel's live stream, and just.. wow. Many weather records were easily broken. Highest water levels recorded in many parts, and an extremely rare instance of the National Weather Service posting a blizzard warning right after a hurricane (that basically never happens) for areas like West Virginia. To call this weather system "crazy" doesn't even begin to describe how crazy it really is.

I do find it amazing how fast life can change because of big weather systems, because when a big system is coming, there's no a damned thing you can do about it but prepare as best you can, sit and wait it out. And then once the whole thing passes, things are much different after that.

Recovery from any weather disaster is slow. Very slow. It takes months just to get started with the rebuliding process. And for certain areas you can't even think about rebuilding until certain preventative things are put in place. An example of this is that in Point Pleasant, NJ, a dune had been built in the early 1990s specifically to block ocean waters from getting on shore, and was built to what they thought would hold for the the long term. That dune is destroyed, so this time around they're going to have to build up that dune much, much larger before doing anything else.

I'm certain that several insurance companies are going to go out of business... again. When Katrina basically flushed New Orleans almost out of existence, the part that everyone forgets is that several insurance companies just couldn't pay the bill and many were left with no way to fiscally recover from lost properties. The result? Lawsuits, lawsuits, lawsuits aplenty. And as far as I know they're still happening. Will the same happen from Sandy? Yes, I'm sure of it.

The northeast will be rebuilt. There will be a lot of legal nonsense along the way, but it will get rebuilt one way or another.