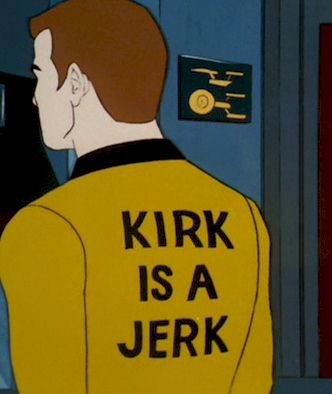 I said before that I've watched every single Star Trek show there is in its entirety. I lied. Unintentionally. There's also Star Trek: The Animated Series, a.k.a. the Star Trek Cartoon.

I have a confession to make about TAS.

No, really. Not joking here.

For a cartoon this is actually very well done and hits a lot of home runs.

Before, I said that that TOS doesn't give me any notalgia mojo, so to speak. Well, TAS does for several reasons.

First, this cartoon aired from September 1973 to October 1974. I was born in 1975, and in my preteen days watching cartoons as a kid in the early 1980s, there were a lot of cartoon reruns from the 1970s because at the time they weren't really that old. I barely saw any episodes of TAS as a kid, but in my head I do remember catching a few glimpses of the show. The one that sticks out in my mind that I instantly recognized when I saw it again is The Terratin Incident. That's the one where all the crew members get shrunk down to tiny size. Totally remembered that one and was so happy I got to see it again.

Second, this is a Filmation cartoon and there were tons of cartoons I saw as a kid that were produced by them. Fat Albert and The Cosby Kids, He-Man and the Masters of the Universe, Shazam!, etc. All that is Filmation.

Filmation had a very distinct style and you could tell when you were watching a cartoon produced by that company. And as I just found out, TAS was largely responsible for establishing that classic Filmation look.

Third, the stories - shockingly - are really good. TOS translated so well in TAS that it feels totally natural to go from one to the other and feel like you're watching the exact same show. TAS totally "feels like 'Trek" and you really have a blast watching it. Yeah, it's true that you see the same ship animations and hear the same music over and over again, but it doesn't matter because the whole thing just works.

Fourth - and this surprised me - were the voice actors. They're almost all TOS cast members. You hear Shatner, Nimoy, Nichols, Takei, Doohan and Barrett (Nurse Chapel). In fact, the only one you don't hear is Koenig (Chekov). But even with Koenig not voice acting, he did write the episode The Infinite Vulcan. The point is that with almost all the original voices, this adds in even more TOS-to-TAS goodness.

Even better is the fact that with Shatner as just a voice actor in TAS, there's none of his annoying pausing with his live acting. Scripts are read precisely and to-the-point with almost no embellishments anywhere.

The only "weirdo" characters on the crew are Arex and M'Ress: 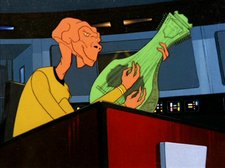 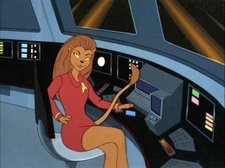 Arex was where Chekov would have been as navigator, and M'Ress was the communications officer when Uhura wasn't around. Yes, there were plenty of aliens in TAS, but these two were specifically Enterprise crew members. They were also for lack of a better word very 'cartoony'.

It seriously blew me away how good TAS is. And, wouldn't you know it, at the time it aired, it was a hit on NBC! So what was the problem? Kids couldn't get into it, and I know exactly why - because it's not "stupid enough". TAS is not your typical ridiculously stupid cartoon that appeals to kids age 12 and under. It was, however, good enough to warrant a barely-there second season.

Cartoons of the 70s and early-80s typically got shoved out real quick, only made enough episodes for a single season and then moved on to the next show regardless of how popular the program was because, well, that's just how things worked back then (and is also why reruns of the same stuff happened over and over again because there was literally nothing else there). The fact TAS got brought back for a very short second season was a rarity for any cartoon at the time.

TAS like any 'Trek series has some weirdness to it. While Roddenberry was alive, after the series was over his office instructed everyone (novel writers, comic writers, etc.) to completely ignore what went on in TAS. After Roddenberry died, some references to TAS were slipped in - particularly in DS9. If you've watched DS9 and then watch TAS, you'll see all stuff DS9 slipped in later on, like the Klingon Kor's ship the Klothos as well as several other things lifted from TAS.

TAS is on Netflix. Every episode. Absolutely awesome Filmation goodness. Even if you're not into 'Trek at all, if you remember those old Filmation classics, you've GOT to watch this one.