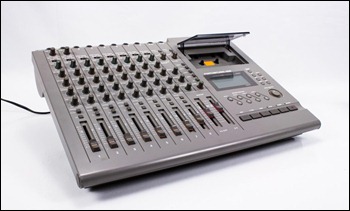 I got a lot of flak because of my last bloggo, mainly because something happened that I totally didn't expect - I actually caught the ear (pun intended) of the audio engineering community and unintentionally hit them right where they live.

The article I wrote was for guitar players and not audio engineering dudes. First I got a load of crap thrown at me on Facebook, lost a few fans (boo-hoo), then comments came in on the blog and blah blah blah. All "amateur audio enthusiasts" (their words; not mine) and pro-level dudes.

To an audio engineer, hearing things like "PCs are dying", "The DAW is doomed" and things of that ilk are heresy. Why? Because they've pretty much spent all their lives working with big-box PCs and Macs, probably went to school for their craft (or are attending right now), and here comes me, this guy with a blog, with a jugular punch right to their livelihood (again, unintentionally), by saying the stuff they use won't be necessary in the near future. Whether it's a student studying this stuff or a 20-year veteran in the recording industry, they interpreted what I wrote as a kick in the face.

I've known a lot of studio rats over the years. And yeah, I call audio engineers who record music studio rats. If you're an engineer and insulted by that, don't be, because it's a term of affection. I don't get offended by being called "guitarded", which is way more insulting than "studio rat" ever could be. Consider that being offensive on an equal opportunity level. I'm guitarded; you're a studio rat; let's move on.

This is my take on studio rats: They have their place in the world; they are needed. But they're not the kind that encourage creativity in a recording environment.

Do you honestly think a studio rat would allow something this "ugly" to be recorded?

Nope. The studio rat would "clean it" and do other nasty things that would take away from the ugly that makes the above recordings so good to begin with.

I am a huge fan of doing more with less, and of course that's the exact opposite of the way a studio rat thinks.

The studio rat would reply with, "No, I like things to be small and compact, too!" True, but only in the physical sense. Ultimately what the studio rat wants is as much control as possible, and because of that they wouldn't be caught dead with a Tascam 488 as shown in the above video. Why? "Too limiting."

The 488 (which I did own at one point) is a great example of doing more with less because the limitations of the machine force you to be creative. If there's something the 488 can't do, you can't load in some software plugin that will magically fix everything. Whatever problem you encounter, you just deal with it and find a workaround. And that's where things get creative and, y'know, fun.

No, I am not saying to dump DAWs or digital. But I am saying that a good studio rat should be able to record with any machine that can record audio no matter what the platform is. To be limited to just one way of recording is just... bad. I mean, studio rats do go to school for this stuff, and they're telling me that the school only teaches one way of recording and that's it? I should hope not. I can record with a DAW, digital multitracker, analog multitrack or reels, but the modern studio rat can't?

I would challenge any studio rat to buy a DP-008, or heck, even a DP-004 (or if you've got really big set of balls, a 424) and record something cool with it. Did you just say, "NO WAY"? Why? You've got mountains of recording knowledge; you know how to wield one. You do know how to wield one, right? Can you accept a restrictive recording environment of a small-sized multitracker? It would be interesting to see if you could, or watch you squirm trying.

Remember, studio rat, you're supposed to be the smart recording guy, so the multitrack recorder should be easy for you... right? If I can wield one easily, you obviously should be able to do the same... right?

To my guitar player peoples, keep buying your multitrackers, keep recording, keep rocking; you're doing all right. And oh yeah, keep posting vids too. We still need more players on YouTube. Yes, I will bug you about it until more videos start getting out there. 🙂

To you studio rats, get off my nuts. Or if you're going to continue stomping on my nuts, take the restrictive-recording-environment challenge. I'll bet that you'll find recording creativity you never knew you had. Why? Art from adversity.