A movie I've been meaning to get for a while is The Black Hole. When I went to f.y.e. in the mall today to purchase it I was totally expecting to order this movie because it is ALWAYS out of stock.

However fortune smiled and they had it - but I almost didn't buy it. Why? Because Disney decided to change the cover. 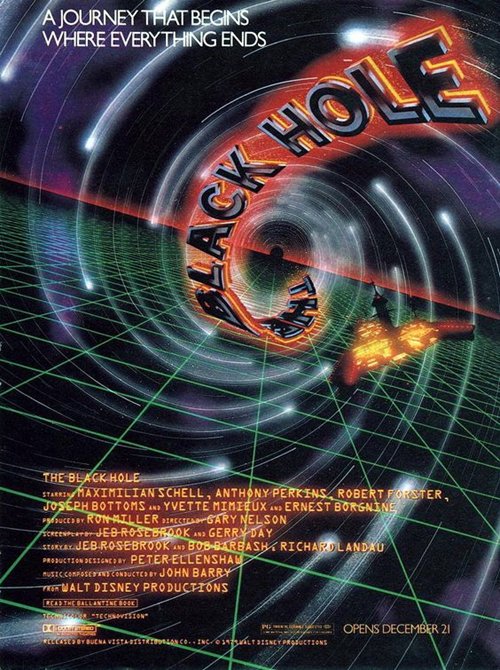 When it was released on VHS it looked like this: 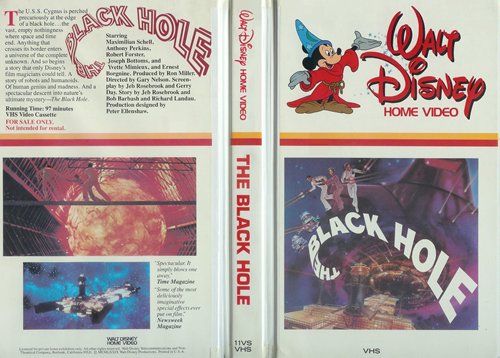 I do remember the VHS cover art and assumed the DVD release would look the same. 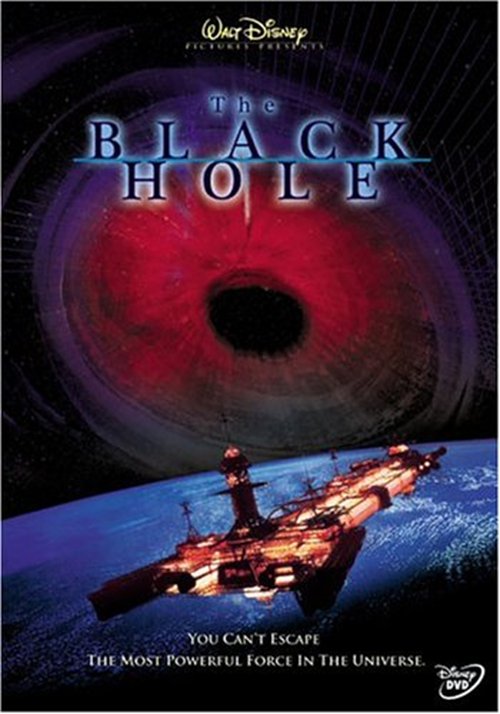 So if you were looking to buy this movie, yes, this is the 1979 release with changed cover art.

The Big Question: Why did I want to own this movie?

Answer: Because I remember the Maximillian robot scaring the absolute CRAP out of me. I first saw this movie at age 6 or 7 (don't remember exactly), and that robot SERIOUSLY freaked me out. I remember closing my eyes several times watching this movie - on a tv! I never saw it in the theater.

Side note before continuing: GET THIS - one of the Maximillian robots is actually on display in Orlando at MGM studios. If there were one reason to get another girlfriend, having someone to go see Max with would be it. Well, there are other reasons too but darn it, seeing the Maximillian is high on the list. (heh)

The other memorable robot in the film is V.I.N.CENT. And yes that is the way it's spelled. It stands for Vital Information Necessary, CENTralized.

Okay, on to the flick.

I mentioned a moment ago that I saw this flick at age 6 or 7. I literally haven't seen it since before today. Back when I first saw it I had absolutely NO IDEA what the movie was about. All I knew is that it had robots and laser guns that looked cool.

When I watched the movie today, here are the things I noticed:

1. You can see wires EVERYWHERE.

I swear, when Disney was filming this they didn't even TRY to hide the wires. You can see them almost as plain as day for anything in the film that's supposed to be floating in air. Very, very distracting.

2. The score is actually an overture.

The score of this movie is top notch symphonic stuff. No question.

3. The lighting is near-perfect.

Where The Black Hole kicks the ever-lovin' crap out of Star Wars is the fact all the shots were colored and lit just right. The film has a total elegance to it that really, really works.

This is out of those "out there" films where you either love it or hate it. Most people would find it excruciatingly boring; I don't. I like it for what it is.

And what is it?

It's a work of art, much like The Dark Crystal is. Weak storyline; killer imagery.

You gotta remember that this movie was made in 1979 that tried (and failed) to cash in on the sci-fi magic Star Wars did. Even though the visuals are spectacular, the storyline just sucks. There are several holes in the plot that just leave questions unanswered.

If you appreciate "old school" cinematography and the way special effects used to be done, you will really dig this film. But if you were looking for a good story, this is not it.

Being that I'm very much into the tech behind cinematography, it is absolutely mind boggling that Disney was able to pull this off when released in '79. Remember, this is pre-Tron era. It's one of the last (if not the last) film done by in-house crews with no outsourcing. It took a big team to put this flick together and it shows.

I dig it and am glad I own it now.