Video Home System, as in VHS, is something I used a lot from the time I was a little kid all the way up until the 2000s.

In the early 80s, the family did start off with Betamax, but that didn't last long because it was obvious that VHS was taking over, and the switch was made to VHS. That's the format I used for a really long time to watch my movies on.

I would routinely test the limits of the technology.

In high school I actually did do deck-to-deck editing with it for a school project. This was called "cuts only" editing. I didn't even know it was called that at the time I did it. All I knew is that it was possible to edit shots together, and with some crazy-ass setup using two VCRs at home, I made it work. Don't even ask me how I got it to work, because I don't remember. The point is that yep, I got the job done. I was even able to add in sound effects. Again, don't ask me how I was able to pull that off, but I found a way.

The longest-run tapes I ever used were the six-hour type, as in "standard grade" in "extended play" recording mode, commonly shown as "EP" on the VCR's display panel. You had SP (Standard Play) for 2-hour, LP (Long Play) for 4-hour and EP as I just mentioned. 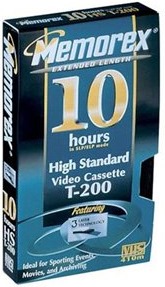 There were in fact VHS blank tapes available that could record up to 10 hours. Most have never heard of it, even for seasoned VHS users. The longest-run tapes they know of are usually 8-hour.

I tried seeing if the 10-hour blank tapes were still available. On Amazon, the longest-run blanks you can get are the 9-hour tapes, the T-180 format.

On eBay, yes the 10-hour VHS blank can still be bought, if you know specifically what to look for - the T-200. eBay as far as I know is the only place that has these for sale. Amazon doesn't even have any. That's how rare T-200 tapes are.

Several companies did make the T-200. Memorex, Maxell, FujiFilm, etc. All the standards as far as VHS blanks were concerned. They're out there, but they don't show up often as the T-200 is the toughest-to-find VHS blank. Sure, you can get 8 and 9-hour blanks easily, but the 10? Only on eBay, and only when anyone has any to sell.

To put this in perspective, you can fit the entire Lord of the Rings Trilogy on one 10-hour tape. All three movies put together have a run time of 9.3 hours.

Why would anyone bother with VHS these days?

There are three reasons.

First, there is nothing easier than VHS to record video with. Decks are still available brand new.

Second, there is nothing easier to record a very long amount of video with than VHS. Even if you can't get the T-200 and have to get the T-180, that's 9 straight hours of recording that can be done, all at a quality level that's acceptable. To do the same with DVD would require a ridiculous amount of file compression, making the video so blocky that it would be nearly unwatchable.

Third is something most people don't think about. Longevity.

VHS when properly cared for can last for 30 years before degrading of the slack starts. And even when it starts degrading, it's still watchable.

Commercial-grade DVD or Blu-ray has at most about 15 years before bit rot sets in. And even the slightest amount of rot can ruin the whole disc. With consumer-grade optical, it will be about 10 years before the disc fails completely due to bit rot.

If you bought a new deck and transferred some video to a brand new T-180 or T-200, then put it in its sleeve, then in a safety deposit box for 30 years, three decades later you could come back, pop that in a deck, and it would play without any problem at all.

There are only two media formats that can last a ridiculously long time. Tape and vinyl. That's it.

Personally, I don't own a VCR, nor do I have any blank tapes. But at some point I will go ahead and buy a new VCR while they're still being made along with blank tapes specifically for archival purposes. It's the easiest and cheapest way to get truly long-term media storage that actually works with no fuss.

True, the video quality isn't anywhere near that of a DVD. But the point is that the video will survive the test of time.

And if you're thinking if anyone will be selling VCRs in 30 years, no, there won't be any. However, given the fact there are retro enthusiasts that are fixing up radios from the 1940s 50s, 60s, 70s, 80s and even 90s now, there will be enthusiasts who will be restoring VCRs for tape playback in the 2040s. I've no doubt of that.

The VCR will survive and the tapes will be able to be played. As for optical, anything "burned" today will most likely be unusable by 2020. And that's truly not a long ways off from now.