The difference between 250K and 500K pots in electric guitars 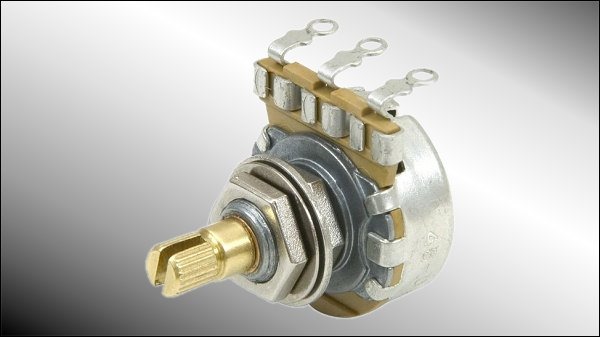 I got a request to write this one.

With volume and tone controls on your guitar, the two most-used potentiometer types are 250K and 500K. While there are 1 meg pots out there, the vast majority of electrics use either 250 or 500.

As to why that is, it basically all comes down to how much a pot will "bleed."

With a 250K pot, a good amount of the high frequencies are actually diverted to the ground wire(s) and that's the "bleed" part. Whatever is bled to ground doesn't make its way to the pickups and therefore results in a sound with less treble response, i.e. a "warmer" sound.

With a 500K pot, there is much less bleed because the pot doesn't allow nearly as much of the higher frequencies to be diverted to ground, resulting in more treble response, i.e. a "brighter" sound.

Is there a HUGE difference in the sound you get depending on whether you use 250K or 500K pots?

I wouldn't say there's a huge difference in the sound you get, but it is noticeable.

With the SSS Strat pickup configuration, 250K pots are normally used. If you swapped those out with 500K pots, there will be more treble response, and for some that may be desirable - however - if it's a standard Strat wiring setup where the bridge pickup is not connected to a tone control, then oh yes, that bridge pickup will "screech" something awful and/or sound "shrill" if wired to a 500K volume control pot.

Conversely, if you took out the 500K pots from a Les Paul and put in 250K pots, the loss of treble "on top" can make the guitar sound "muddy."

The general rule of thumb for which pots to use is...

For single-coil, which includes Strat-style and P90, use 250K.

For dual-coil (humbucker) where you need extra treble response, use 500K.

"I have a guitar with humbuckers in it, and it sounds 'too bright' no matter where I set the tone knob"

Some humbuckers have a high treble response to the point where no matter what the tone knob is set to, there's just too much treble present and it bothers the player (you).

In that instance, switching from 500K to 250K may set a "ceiling" for the treble that better agrees to your ears.

Remember however that switching from 500K to 250K or vice versa is not going to guarantee you a sound you will like.

But it is cheap enough to try out a different potentiometer resistance. Pots are really cheap whether 250K or 500K and easy to wire in, so it doesn't cost a lot of money to try it out.

Even if after you bought the pots and the sound you get after wiring them in wasn't quite what you had in mind, that's fine because then at that point you've got spare parts to build/rebuild another guitar with, so nothing is really lost. (Good spare parts are good to have!)