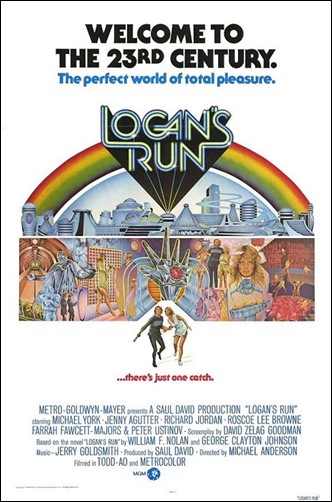 For the past few years now I've been purposely seeking out movies I saw in my teens or younger years and re-watching them. Many of these were sci-fi flicks where as a kid I had absolutely no clue what was going on in the movie, but watched it anyway. One of these flicks was Logan's Run.

Movies like this were shown back in the day where broadcast television (as in NBC, CBS and ABC) would periodically run a sci-fi movie during the summer. They were shown to fill time before the new fall season was introduced because, well, they had to kill time somehow. You have to bear in mind this was well before cable was a standard thing in most households. People back then watched broadcast TV because there was nothing else on unless you wanted to run to the video store and rent a movie on VHS.

Any feature film that was shown on broadcast television during the summer was "Edited for Television", meaning significant amounts of the movie were cut out in order to fill a standard two-hour time slot. Remember, for every 30 minutes of TV time there are 8 minutes of commercials, meaning a two-hour show had just under 90 minutes to show the whole thing. If the movie ran over that (which this movie does from its runtime of 119 minutes), huge chunks of the flick are cut out when put to television. This usually results in missing out on things important to the movie, like, y'know, plot points.

I watched Logan's Run as a kid on broadcast TV. Like I said above, I had absolutely no clue what was going on when watching it originally. None at all. For many years I had made a point to watch the movie again just to at least get what the hell the story was about.

Before I get into why LR sucks, it's important to note that this sci-fi flick is pre-Star Wars era. LR was released in June 1976; Star Wars in May 1977. In other words, LR was the best you could get for sci-fi at the time.

LR is so dated it's not funny. It screams "I WAS MADE IN THE '70s" all over the place. Outfits, haircuts, super-cheesy synthesizer music and effects, crappy miniatures (it's so obvious the dome cities were models it wasn't even funny), you name it, it's total crap.

The cheesiest effect in LR are the guns that the Sandman characters use. When they shoot the gun, nothing comes out of them to hit the target. A crappy 1/2-inch butane flame comes out, then whoever is getting shot just has a small firework explosive explode. There is no ray from the gun to whoever is getting hit, nor is there any projectile. Cheeeeeeeesy.

The second cheesiest effect is that robot thing in the ice cave... and I won't even go there. When I saw that I thought, "You have GOT to be kidding me..."

As far as the storyline is concerned, it's disjointed as hell. Yes, I could follow along with it enough to understand what was going on - but that didn't help making LR believable at all because the flow is completely off, and the flick is just plain weird.

What I mean by weird is that there is simply not enough explanation as to why people act the way they do - particularly Logan, the main character. He simply does not have a good reason to run at all.

The biggest flaws in this movie are right at the end - and I'm about to spoil the whole movie for you but I consider it spoiled anyway so nothing of value is lost:

Okay, so Logan is captured after coming back from The Outside, restrained (I think) in front of a computer and the computer interrogates him. There is no explanation who's running this computer at all or where it came from other than "it's just there".

Upon a mind interrogation by said computer, Logan doesn't give answers the computer likes, so it just, y'know, explodes for no reason.

Logan is then all of a sudden not restrained at that point, is able to defeat ALL the other Sandmen around him easily with the guns that don't shoot anything but still hit targets, and get away without a scratch.

The whole eff'ing city explodes at this point. People panicking everywhere and running around like crazy - yet in the very next scene they're just calmly walking out of the top of the city to The Outside. And guess what - none of them are hurt.

Are there any people carrying infants or smaller children which are known to exist in the dome? No. Not a one is carrying a child. Guess they all died in the fire. Bummer.

Then they all play touchy-feely with the old man's face, and...

THAT'S IT. MOVIE OVER. THE END.

This is the exact thought you'll have when you see the credits roll: "What the frig did I just watch?"