Would a tremolo lock button be useful on the Squier Jaguar or Jazzmaster? 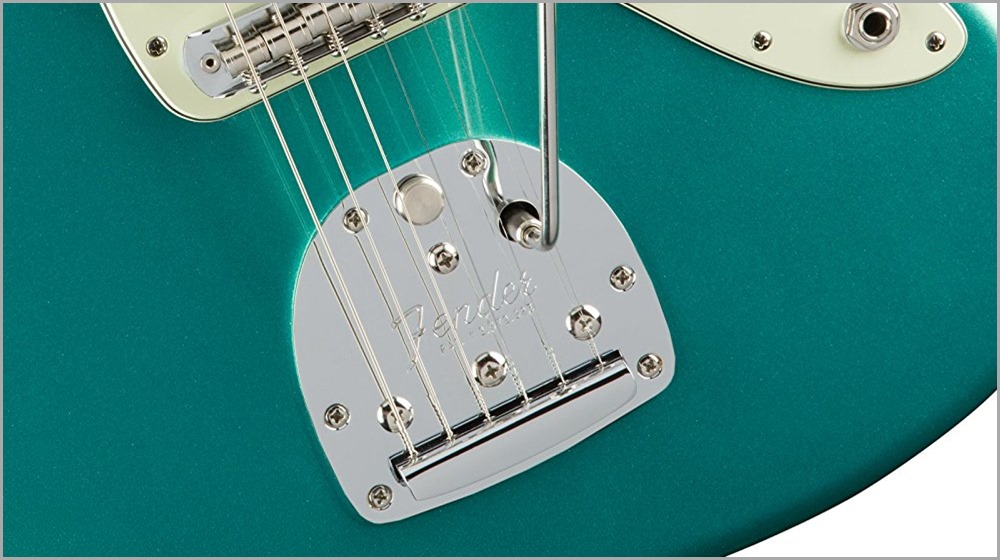 This button looks cool, but that's pretty much all it's good for.

On Fender Jags and Jazzes such as the Fender American Professional Jazzmaster and Fender American Professional Jaguar, there is a button on the vibrato plate forward of the tension screw where you can lock the system in place, purposely preventing it from being used. Neither the Squier Vintage Modified Jaguar nor the Squier Vintage Modified Jazzmaster has this. Also, a few Fender models like the Fender Standard Jazzmaster HH and Fender '60s Jazzmaster Lacquer do not have it either.

Some players believe that having the lock button is a super-important thing to have.

The only time use of that button actually works right is when jazz gauge string is used. And by that I mean something like a flatwound set such as the D'Addario Chromes in 12-52 size. At the time the Jazzmaster was introduced back in 1959, thicker jazz flatwound strings is what was used and what the guitar was originally designed for...

...but times have changed. A lot. The majority of electric guitar players, myself included, use strings that are much thinner and roundwound with much coarser string wraps compared to the thicker, smoother flatwound jazz strings from days of old.

Unless you're using thick jazz flatwound strings, the lock button really serves no purpose. Every time the lock is engaged and then disengaged on a Jag or Jazz with roundwound strings installed, you have to retune every string. Why? Because the overall tension of the strings changes from locked state to unlocked state. Again, leaving the system permanently floating is the better option. The only time I could ever recommend a locked system is if you never use the vibrato at all, but that kind of defeats the purpose of owning a Jag or a Jazz in the first place.

Flatwounds can handle the tension change because they are much tighter when tuned to pitch, but with roundwound, not-so much.

Basically put, you're not missing anything by not having that lock button. Once a new set of strings are properly broken in and stretched properly, the Jag or the Jazz will keep its tune just fine.