Ah, the Mustang. A weird little guitar. But cool.

Let's talk about the '71 Fender Mustang in "Competition" Red.

The Mustang is one of the most affordable (if not the most affordable) vintage Fender electrics you can buy. You'll see from that link that the price is surprisingly low for a Fender that old. It's not because the guitar has anything wrong with it other than a few minor cosmetic issues. Mustangs just don't command high prices.

Said another way, if you want to collect a vintage Fender electric, check out Mustangs. Believe me, there are always plenty to choose from, even for models made in the late 1960s.

There's the Fender Classic Series '65 Mustang on the expensive side, and the Squier Vintage Modified Mustang on the cheap side. I would actually prefer the Squier if buying new because the truss rod adjustment is at the pegboard and not the heel.

There are several reasons for this.

What you have here is a plate with strings installed on it that rest on saddles that do not have adjustable height (the bridge's height however can be adjusted, thankfully.) This system is like a cross between a Stratocaster and a Jazzmaster, and to be honest, most players find it completely unusable..

..but then again, I've never known anyone to use a Mustang vibrato system, so that's really not a big deal.

The Mustang is a little guitar. It qualifies as adult-sized, but just barely. The neck is a short scale 24.0-inch just like the Jaguar, but it's the body where you really feel the smallness of the instrument.

The advantage of the smallness is that nearly all Mustangs are very lightweight guitars.

Some players just don't like these switches. I've wrote about this at length before, but this is how the two switches above the pickups work:

I'll label these as F, M, R and list below the 4 pickup combinations.

What happens if both switches are in the middle position? That's both pickups off, and you would hear nothing.

The out-of-phase sound is a "nasal" or "honky" type of tone, while in-phase has somewhat of a Telecaster sound to it. I say 'somewhat' because the pickup spacing is different on the Mustang compared to a Telecaster.

I basically describe the Mustang's tone as a mix between a Jaguar and a Telecaster. Yes, it is a very usable sound.

To the best of my knowledge, any Mustang labeled as "Competition" means it has the racing stripe on the body. Of the Competition colors, I've seen Dakota Red, White, Lake Placid Blue (which for real-deal vintage sometimes turns to green,) and the rarest - and also ugliest of the bunch - yellow (which over time turns to orange):

Now before you say, "Oh, wow, cool, I like that!" Trust me, you don't. The Competition Yellow Fender Mustang is one of those guitars that looks better in pictures compared to real life. I guarantee that in person you would hate the look of this guitar. While in pictures it looks cool, in person it looks very toy-like.

Think of it like this. The Mustang is already a smaller guitar. Slapping a "wild" color on it doesn't help make the guitar look any better.

Dakota Red and Lake Placid Blue with the stripe are the two best lookers of the bunch.

Does the stripe work on a Squier Mustang?

Of the three colors that would take to a stripe properly, there's only one. The Vintage White version. That guitar comes with a tortoise shell pick guard. If you swap out the guard from that to parchment ("aged" white,) then apply a dark blue stripe, this is the end result: 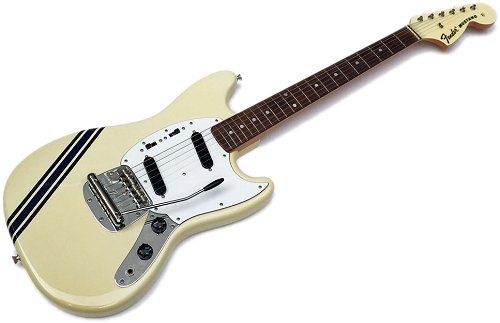 The above is the look of an early-1970s Fender Mustang, around 1973 or so. It's a good look for the guitar. Yes, you can get this out of a Squier, but the guard has to be changed out to a solid parchment color first.