This one is a first for me as it's a true real-deal 1080p video presentation. Yes, I finally got a camera that can record in that resolution.

This is an addendum to my last video about the R8, but zoomed in tight and in 1080p resolution so what I'm doing can be seen better.

I have received a few communications that yes, people want something better than what the Zoom R8 manual has to offer, so I will be writing up a book on it.

Is it Zoom's fault that the manual isn't detailed enough?

No, not really, because the same over-simplified manual style also happens with the Tascam DP-008 (which I also owned at one point.)

The problem with manufacturers who make multitrack audio recorders is that they write manuals that tell you what the functions are, but not what their purpose is nor how to use them in practice.

Going back to the past for a moment, my first multitrack machine was a first-generation Tascam 424 (the light gray model,) and it came with a manual that was under just under 60 pages. The absolute best part of the manual was the section on "ping-ponging" tracks, because it had absolutely nothing to do with any specific feature of the unit, but rather described a recording technique.

Tascam put stuff like this in their multitrack manuals in the past... 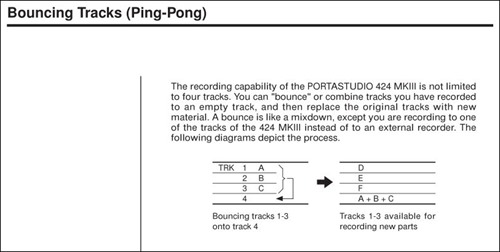 ...and they would even explain why you would ping-pong tracks,
described in plain English, which is a very nice touch.

That is a rare thing to see in any manual for a multitrack recorder, but the 424 manual had it. And yes, I did use that technique often back when I had one.

What's needed is a reference manual

There are two main types of manuals when it comes to instructing the user (you) how to use something.

The first is the user's guide, which is a small document written with the specific intent on instructing the user how to use the whatever-it-is quickly.

The second is the reference manual, which is a much larger document written to describe intermediate to advanced usage techniques for the whatever-it-is.

For a long while now, companies have completely stopped offering any kind of detailed documentation for what they make. All you get is the user's guide and no reference manual.

Concerning a product like the Zoom R8, a reference manual is desperately needed, yet it doesn't exist (or won't until I write one, which is coming soon.) The R8 looks like something that's fairly easy to use. And to be honest, it is easy, but for someone who has never used a standalone multitrack recorder for, it's very intimidating. Why? Because the R8 is absolutely loaded with features. Features are great, and having a lot of them is also great, but if you don't know how to use them, that's not-so great.

My intent with the reference manual I'm writing for the R8 will be to make it much less intimidating to use, simply by describing what does what and why you would use particular features that it offers.

Will I describe every single thing in the R8? No, because that would end up being several hundreds pages long, and you don't have the time to read through something that large.

What I will do is write up something that gives you a much better understanding of how the R8 works, with practical examples. In other words, a reference manual in plain English that's actually usable and good.

That manual will be coming soon. I'll announce it here when it's finished.