I think I got some pretty darn good photos today. 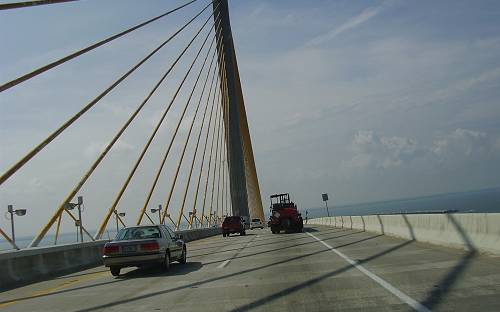 Driving on the Skyway Bridge. 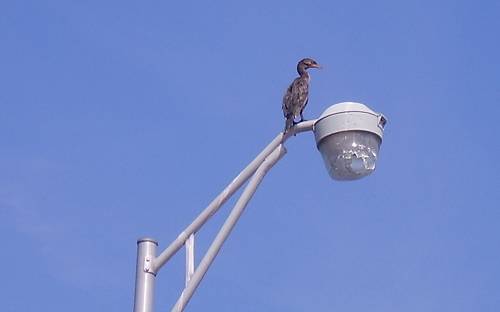 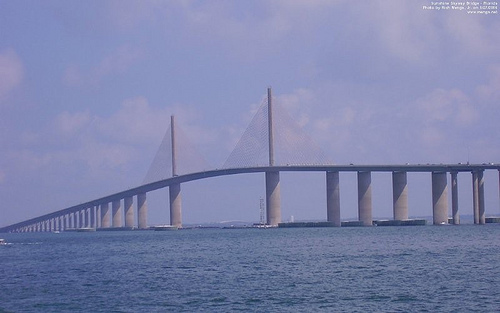 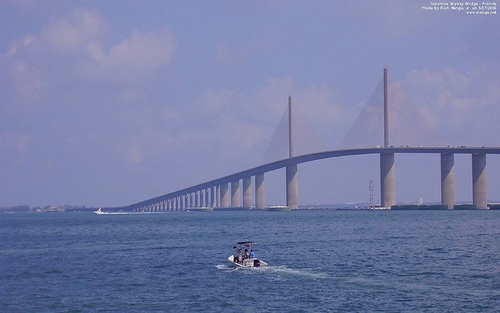 Same shot except with a boat. Looks like something you'd see on a postcard. 🙂

it'll cost a buck but it's worth it

I've decided to traverse the Sunshine Skyway Bridge today. Cost: A buck (for the toll). I'm leaving now and hopefully traffic won't be too bad.

Or you can do it the easy way and download a GPX I made and then export to your GPS device. For those using Garmin products, MapSource will import this file easily (that's what I made it with). If you don't know how to use MapSource, see my GPS page.

on geckos and houses

I wonder, when stating gecko as plural, is it "geckos" or "geckoes"? I spell it without the e.

For the past two nights a gecko (a different one each time) has appeared in my apartment right after I get out of the shower. Being a New England native that's not used to such things, it scared the hell out of me. I contacted my apartment management office and alerted them of it so they'll take care of it. I think there's a small hole in the ceiling vent grate in my bathroom. When the steam rises, the gecko "likes" it and heads towards it. I could be wrong but that's what I think it is.

It doesn't matter how clean you keep your house or apartment (and mine is spotless). Inevitably a gecko will find its way inside once in a while. The best advice I've been given is to just shoo it away, because killing it makes a mess (assuming you can catch it because they're real quick) and it leaves. And it does. Also, a gecko will get nowhere near you. It's definitely one of those "more afraid of you than you are afraid of it" things.

Pop finally sold the house in Maine and just bought a place in Inverness. He will be moving in a month or so. Inverness is fifty to sixty-ish miles from me.. I don't exactly remember how far.

I have the physical address of the place so I'm going to drive on up there this weekend to check it out. Being that there are still people living in the house (who will vacate soon), I won't be going inside but I'll drive by it and maybe snap a few photos.

Speaking of the weekend, Monday is Memorial Day so I get a three-day weekend and a short four-day work week next week. Cool beans.

Things I plan to do:

A lot. I already did earlier when I got home from work, because I worked my ass off today. I plan to do more of it.

Hopefully the extra day will spark some good creativity.

I'm going to Inverness anyway to take photos, so hopefully I'll spot some other cool stuff there as well. I'm also considering heading out to the Sunshine Skyway Bridge in St. Pete. It holds the record as the world's longest cable-stayed concrete bridge. Other people don't find things like that particularly interesting, but I do (if for nothing else than to say "I went there").

Anything that holds some scenic value to it I'll drive to if it's within a reasonable distance and snap photos if there's anything worth taking a pic of.

Back in Connecticut I drove almost the entire length of I-395 (Thompson to Niantic), clear across the state (Dayville to Danbury, hi Kat!), and when I had my first GPS (the StreetPilot i3) I stopped by every state park I could find before I left and got some really good photos.

In Maine I really didn't do much for the sole reason that it takes so frickin' long to get anywhere. That and the roads are best described as "dumpy". And let's not forget the lack of street lights, guard rails, reflectors and in some cases no painted road markers.

Florida has proved to be a cool spot for some good photography, and with any luck I'll get some more cool pics over this long weekend.

Write somewhere other than my blog

I have a few ideas rolling 'round in my head for screenplays and stuff but I just haven't put the ideas to literal form yet. With any luck I'll buckle down and just get that done.. or at least started. 😉