blogs do not need comments anymore

I figured I'd write up a bloggo about this since the day after I did it I got emailed with a "where's your comments?" inquiry, and I'm sure there's more to come, so here's an explanation of why there aren't any comments here anymore.

END_OF_DOCUMENT_TOKEN_TO_BE_REPLACED 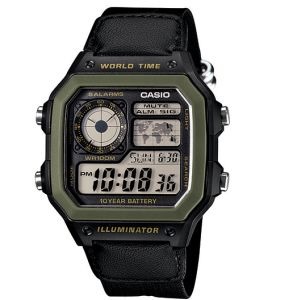 I've not regularly worn a watch in years. As a kid I used to wear Casio watches all the time but just stopped after a while. Then in 2011 I just felt the need to own a Casio watch again, so I bought two, the F28-W (which I still own) and the W59.

The W59 I returned because I hated the band on it. While true the F28-W and the W59 both use a resin band, the W59's band just has a textured shape to it that irritated my wrist, so back it went. That, and the W59's display - much like the F-91W - does not display weekday, month and day all at once, but rather just weekday and day. That to me is annoying because I prefer weekday, month and day all showing on the face.

I ordered a new watch recently, the Casio AE1200WHB-1BV. I don't have it yet, but it should arrive in less than a week.

Did I need it? Actually, yeah I did. And it took a lot of searching before I decided on going with that watch in particular.

Lately I've been using the countdown timer in my cell phone quite a bit, because there are things I need to time where I walk away and need a reminder to come back later (such as running a clothes dryer cycle). Using the phone is annoying for this task and it's just altogether easier to have a timer right on my wrist.

There are certain things I do that happen at the same time every day, and again, it's easier to have a watch on the wrist beep at me at the appropriate time instead of doing daily alarm stuff on the phone. However, for very-specific stuff that happens on a particular calendar day, the phone is definitely better and I don't deny that (specifically because of the keyboard and the extra space to type up a description).

I needed a watch that supported multiple time zones because there are instances where it will be very convenient to see what time it is in other parts of the world from my wrist just from a single button press.

The fact the AE1200WHB-1BV has a black nylon strap band is a very, very big deal for me because black nylon watch bands are very difficult to find on a new watch. Sure, you could buy it separate and install one that way, but why bother with the extra cost when you can get it right on the watch itself that fits exactly right the first time?

The best way to wear a watch is so that it fits loosely on your wrist. With resin bands, that feels to "plasticky". With pleather bands, same deal, too plasticky. With real leather bands, yes those are comfortable once broken in, but they have to be thick to feel right, and that thickness is something I don't prefer. With a metal band adjusted by links, that feels too sharp on the wrist. With metal that acts like a strap, too "bumpy". With metal that has spring tension, that pinches my skin.

At that point the only option left is fabric, as in nylon. Great material, very durable and can handle pretty much anything - except for the fact the vast majority of nylon bands for watches are any color but black...

...so you can understand now how my eyes lit up once I found out Casio had a watch with every feature I wanted and the black nylon strap band.

Casio does do nylon bands correct. The part of the band that holds the watch has an extra thicker stitched "shroud" around it, while the rest of the band is the regular thinner nylon. Very good combo because that's basically the most durable setup you can possibly get.

And after that, any Casio PRO TREK watch is a frickin' monster, size-wise. The PAW1300T-7V (I picked that one just because I like the way it looks) measures as 56.9 x 47.4 x 11mm and with the band weighs 97g. Significantly thinner than a G-SHOCK and even thinner than the watch I just bought, but freakin' chunky everywhere else because of its "Tough Solar" wide casing.

For weight, the F28-W is a feather-light, weighing in at only 14g - and that's with band. No, I'm not kidding. Its extremely light weight is basically the only reason its resin band doesn't bother my wrist all that much.

Yes, this does mean the watch I'm receiving at 39g is well more than double the weight of the F-28W - but - it has the proper nylon strap treatment and it's very flat, so it should fit nicely.

I do dig the look of the AE1200WHB-1BV a lot. Some Casio watches just look plain dopey, but every so often one is introduced that gets it right, and I'm pretty sure the one I just bought is one of those.

Eventually at some point I will buy an analog dress watch, because as far as style is concerned, analog always looks classier than digital. I will either get a Citizen or a Seiko, with white dial and calendar on the face. Probably a Citizen.

When you're seen wearing something like the Citizen AO9003-16A... 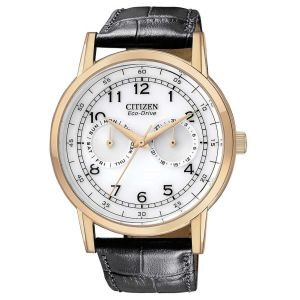 ...you're the man. There is no ifs, ands or buts about it. You are the man when you wear a watch like that because it just screams style and class.

And you'd be surprised at how people treat you differently when they see a ritzy timepiece on your wrist - even if you're dressed in just jeans and t-shirt. Citizen is one damned fine brand of wristwatch and it does get noticed.

Casio does have expensive timepieces as well, and they're nice and all that, but they don't come anywhere near the style and class that Seiko and Citizen have. Heck, even a $90 Seiko just says "luxury" all over even on their basic models.

So yeah, I'll get the dress watch someday. But for now I wanted function, and the Casio I bought fits the bill nicely.

There are certain guitars out there that when made with certain woods (just for appearance) and colors define the classic look for that particular instrument.