Cheap guitar report for May 2013 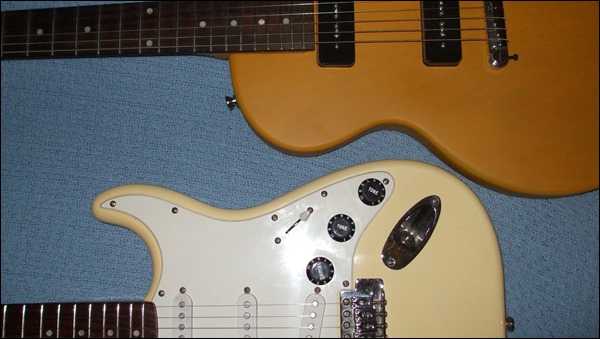 Something I didn't even realize until just recently is after all this time, I own the two most popular guitar shapes in existence, that being the Stratocaster and the Les Paul shapes. That doesn't mean anything, but it feels kinda cool. 🙂

So anyway, here's how my 'yellow brigade' guitars have fared out.

The only problem the Squier had was that one of the 12-fret fret markers sunk into the neck in the first month I owned it, replaced under Fender warranty. No problems since.

The Epiphone hasn't had any problems at all.

The Strat's advantage over the Epi Les Paul is that it's a true "set it and forget it" guitar. Once you have the neck adjusted and the saddles set up, the only time you'll have to set up the guitar again is if you change string gauge (such as from 9-gauge to 10) or if the guitar was subjected to some significant climate change, like being stored in a cold basement or something like that. I've only had to make minor saddle adjustments, and only because I switched from D'Addario to Dunlop strings, which have a different string tension that required minor saddle height adjustment.

The most annoying thing about the Les Paul is the wraparound bridge on the specific model I have. The annoyance is that when you take off the bridge when doing a string change, the height adjustment screws are totally exposed and turn way too easily when doing a cleaning.

I'll explain that a little more in detail.

Okay, so you've got your Les Paul with the wraparound bridge, go to do a string change and take off the bridge like you're supposed to. Fine. Then you take a dry cloth and do a body wipe-down just to keep the guitar clean before putting the new strings on, wipe where the screws are and whoops, you just turned one of the adjustment screws two full revolutions. Yeah, it's that easy to turn them, because when the bridge is off, they're loose. Not loose in a bad way, but without the wraparound bridge there for tension, yeah, they can be spun around pretty easily.

The fix for keeping the screws from spinning while cleaning around them is just to put your finger on top of the screw and hold it there while you wipe with a cloth around it with your other hand. Easy enough.

As for which guitar stretches out strings and tunes up quicker, that would be the Squier Strat, no question. A "decked" bridge combined with a stiff maple neck with 25.5-inch scale makes for quick tuning. The Paul on the other hand is a 24.75-inch scale, and since I'm using 9-gauge on it, that in combination with the mahogany neck means it's one of those "guitar has to sit overnight to get stabilized tension" guitars...

...which brings up a point that I haven't mentioned before. There are some who say that in order for a guitar to have strings stretch out properly, it has to sit overnight, while others say that's not necessary. In my experience, if the guitar is a 25.5-inch scale with a maple neck (i.e. Stratocaster or Telecaster), strings can be stretched out and keep tune proper in just minutes. However, if the guitar is shorter than that, like a Jaguar 24-inch or a Les Paul 24.75 inch, and/or the neck is mahogany and not maple, yeah it needs to sit overnight before strings hold tune properly.

Will this work for you? That I can't say, because it depends on your playing style and what strings you use. I ordinarily use hard picks and play hard, so I bang up strings pretty good.

It took about 6 months for the Strat to break in properly, and for the Paul it took about 4 months before it "felt like mine".

Ordinarily, it takes me a bare minimum 90 days for any guitar to "feel right" for me. As I've said before, I have never picked up a guitar (no matter the price) that felt perfect on the first try. Will that ever happen? Maybe, but I doubt it.

A guitar isn't "mine" until I've really put her through her paces, so to speak. My finger oils have to be worked into the neck, I have to get used to her character and it's absolutely not an overnight thing.

I take a risk every time I buy a guitar, and the risk is that after time, I may hate it and want to get rid of the thing for something else. I've done that several times with other guitars I've owned, but both the Squier and Paul are definitely staying in the stable. 🙂 Both of them are worn in proper, and both look better than when I originally bought them just because they're now banged up a bit.

On the Squier, yes the color has changed. The Arctic White (which I call banana yellow) body now "looks more like a Fender" because it doesn't have that shiny-new "plasticy" look to it anymore. The pick guard is also slightly darker.

On the Paul, not enough time has passed for its color to change, but I'm certain at one point the body will develop a spot either from my forearm or pinky finger where I anchor when playing certain stuff - and that's fine because it's an "earned" spot.

Both guitars are great players, broke in properly to the point where I don't feel I'm 'fighting' with either of them, and I'm sure they'll continue to provide a lot of playing goodness for a very long time.