Easy Strat mods that everyone should do

A Strat is a great guitar to mod because there are so many things you can do to it. However, some mods are good while others are not-so good.

The guitar at top is a Fender Ritchie Blackmore Stratocaster. The first thing you'll notice is that the middle pickup looks weird. That's because it's a dummy pickup. The guitar only has a rear and front pickup, but no middle. This is a mod I absolutely would not do because I do use the middle pickup quite a bit. Blackmore doesn't favor the middle pickup, so in the way Fender designed his signature guitar, they simply removed it.

What classifies as an "easy mod?"

The best way to describe this is what would be classified as difficult mods first.

Scalloping a fretboard is a difficult mod. This is a scary mod. Not only is it real easy to screw up the neck, but the moment you start taking away wood, that's the point of no return and there's no going back. Scalloping has to be done right the first time or you pretty much lose the neck. It is absolutely necessary to practice scalloping on a throwaway neck first.

Installing tuners that don't fit into the existing pegboard/headstock holes is a difficult mod because, again, wood removal is required, and again, once you start taking away wood, there's no going back. While definitely easier than scalloping a fretboard, you have to widen the holes just enough so that the tuners fit properly. If you take away too much wood, that would be bad.

Installing a preamp is a difficult mod for two main reasons. One is lack of space and the second is establishing easy access to a battery box.

To give further explanation on how difficult installing a preamp in a Strat is, this is the back of a Fender Roadhouse Stratocaster (a guitar I just recently reviewed that does have a preamp in it):

Why can't the box be in front of the rear cavity cover? Can't do that because of the two large tremolo claw screws. Why not above the cavity cover? You run smack dab into pick guard screws from the other side. Why not behind the cavity cover? That's actually doable, but can potentially create a weak point when the tremolo system is in use and split the wood later on. The decision to place the battery box area below the cover and edged to the front to avoid running into other installed electronics was the right thing to do - if not the only way to get it in there.

If you ever want to install a preamp in a Strat, follow what Fender did with the Roadhouse Strat. They did think it through, and where they put the battery box was the best possible place it could go.

Okay, that being all said and done, let's move on to the easy stuff.

Standard Stratocaster wiring for Fender, Squier and pretty much any other company that makes a Strat copy dictates that the bridge-only pickup selection has no tone control wired to it. Why? Because that's the way Leo Fender himself designed the Strat's electronics originally.

There are many players who consider the fact the Strat has no tone control on the bridge-only pickup setting to be totally stupid. I totally agree.

This is a Strat's 5-way selector in its normal state. Notice the open terminal in the middle: 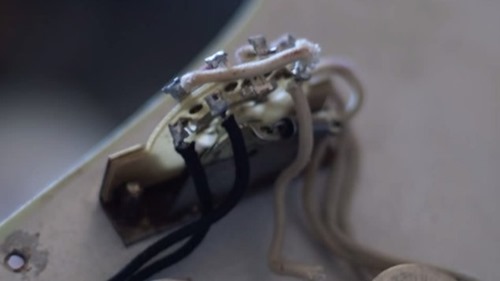 Solder a small cable to that open terminal, then to the other terminal directly next to it: 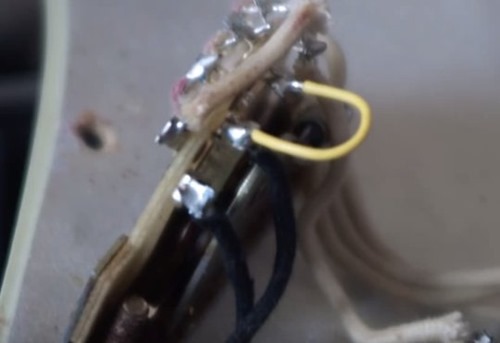 That's it. Now you have tone control on the bridge-only pickup setting.

If soldering is too scary for you, any reputable guitar shop with an on-site tech will know how to do this mod. It is a very, very common request. Most places will do it for $25 or less. 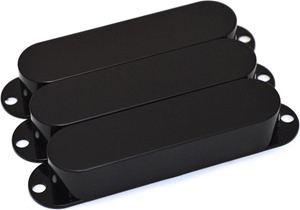 (try this search on Amazon for something like the above,
many color options will show up, including white,
cream, green, orange, pink, etc.)

The first Strat I ever saw with no-hole pickups was in the 1990s when Fender was using Lace Sensor pickups on certain models. It looked cool, and still does.

Fortunately, you don't need Lace Sensor pickups for that cool no-hole look. You can just get the covers instead. But it should be said that if you want to put in a set of Lace Sensors, that's actually a very good pickup upgrade. 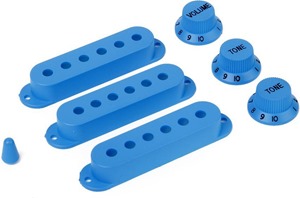 (you can find cover sets in various colors here)

There are 7-piece sets where you can swap out every pickup cover, every knob and the switch tip with a different color. Many colors are available, including chrome, gold, green, orange, blue (shown above,) and others.

The two most-used types of string saddles used on Strats are bent steel and block. Block is called as such because it looks like a block, as shown above.

A search for Graph Tech string saddles brings up the most options for switching out bent steel to block.

Reasons why block is better than bent steel: 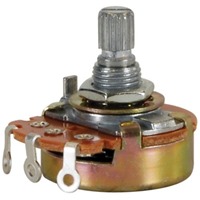 This one takes a bit of explanation, but it's not too difficult to understand.

Whether the Strat you have is made by Fender, Squier or someone else, it's pretty much guaranteed that all the knobs are 250K audio taper pots. Switching the volume control out to a 250K linear taper pot brings about some tone control you didn't have before.

The advantage to audio taper pots is that most of the treble is kept even as you turn the volume down. Audio taper pots are also really good for volume swells, should you use that style of guitar play.

Gibson guitars typically use linear taper pots. To your ear, when you turn down a linear volume pot, you will hear the treble start to cut off a lot sooner.

What happens when you install a 250K linear volume pot on a Strat? You're able to cut off a small amount of treble while keeping most of the signal just from turning the volume pot from 10 to 9 or 8.

For some players, this is really convenient because it allows a super-fast way to cut off just a smidgen of treble without having to grab a tone knob.

The disadvantage is that linear taper pots are not good for volume swells, so if you use that style of guitar play, keep your audio taper pots. But if you ever wished, "Gee, I wish I could just take off a small amount of treble without 'mudding' out and still keep my gain up," install that 250K linear pot for a volume control and you'll get it.

...which is incidentally exactly how the Jaguar and Jazzmaster are set up. They use 1meg linear volume pots and 1meg audio tone pots. It's not a new idea. Some believe that linear volume/audio tone is the best combo you could use on any electric because it's the most usable.

The higher the resistance number, the greater the treble response.

Strats use 250K because the skinny single-coils it uses have a high treble response, and 250K keeps the tone civilized without being "screechy."

Guitars with humbuckers, such as the Les Paul, use 500K pots because the dual-coil by nature has less treble response than the Strat single-coil does; the 500K increases treble level so the pickup doesn't "sound like mud."

1000K pots, a.k.a. 1meg pots, are used in Fender/Squier Jazzmaster and Fender/Squier Jaguar guitars, hence their "ice pick" like sound when the volume pot is turned all the way up. A common mod that Jazz/Jag owners do is switch out to 500K pots or even 250K to bring down the treble to a "civilized" level - however - since the volume pot is linear in the Jazz/Jag, a quick volume turn from 10 to 9 or 8 has pretty much the same effect.

Large single-coil pickups like the P90 vary as to what volume pot resistance is used (it changes around depending on what company made the guitar.) Some go as low as 100K, while others use 300K.

Strat single-coils typically do sound best when 250K is used, regardless if the taper is audio or linear.

These are cheap, readily available, look cool and help prevent string "kinking," but I'll give you a warning here. Watch out for the "nub".

If you have an modern American Standard Strat (anywhere from the 1990s to present,) you already have these roller trees, so anyone who installs these will do so on a Mexico Strat or Squier.

Here's the thing to know: On the bottom side of some roller trees, there is a metal nub on the underside. It looks like this: 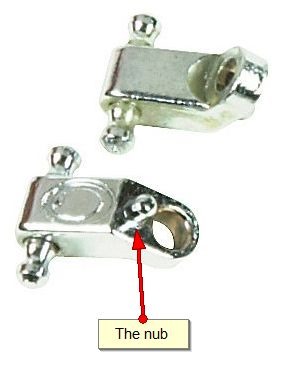 If your roller string tree set has the nubs, file them off using whatever metal file you have available. But bear in mind the roller string tree is small, so you must use a small file to do the work, and do it slowly because it's almost too easy to shave off too much. All you want to do here is just shave it flat.

I also suggest doing the filing by hand. Don't use a Dremel or a power tool, because it's guaranteed you'll take off too much metal. Do it by hand.

One last thing on the trees. If your Strat headstock has two of them, it's probably true each is of a different height. If so, specifically buy a pair that has those staggered heights to them so your strings rest proper after they're installed.