The Epiphone "E" logo as I've mentioned before is one of my favorite logos as far as guitar brands go. I just like that E, what can I say.

There are two E logos that Epiphone has. Standard and italic:

Much the same way Fender uses the old-style "spaghetti" logo and the modern "transition" logo, Epiphone does the same by using both E logos depending on what guitar they're featured on.

Where is the E logo used on Epiphone guitars?

The only Les Paul that Epiphone makes that actually has an E logo is the Les Paul Junior, of all things...

Yes, as in the dirt cheap single-humbucker LP Junior that usually comes with a "game bundle" (as in video game bundle).

Other than that very specific Epi LP, none of the other Epi LPs have the E logo. And as for the SG, no Epi SG exists that comes with an E logo anywhere on it either.

Usually, the only time you ever see the E is on archtop Epiphone guitars, starting with the Epiphone Wildkat on the truss rod cover; it uses the italic version:

And no, a truss rod cover made for a semi-hollow/hollow-body Epiphone guitar will not fit on the Les Paul or SG, because the shape and the screw hole positioning are different.

You start seeing the E logo on both the truss rod cover and the pick guard on the Epiphone Dot "Royale" Limited Edition model:

...and this is a weird one because yes, the standard E is on the pick guard and the italic E is on the truss rod cover - on the same guitar. Epiphone just does weird stuff like that. While I'm sure there's a reason why there's a standard E on the guard and italic E on the truss rod cover, I couldn't tell you what that reason is because I don't know.

With the more expensive Epiphone models you start seeing the E a whole lot more, but on the lower end it starts with the Wildkat and special edition Dot models.

On Gibson-branded Les Paul and SG guitars, the truss rod cover is in the shape of a bell and is mounted using two screws: 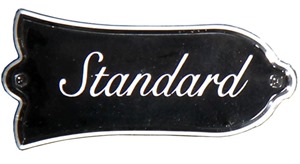 ...however on the Epiphone version, the truss rod cover uses 3 screw holes instead of two, and the bottom is flat instead of having the "bell ringer" hole placement:

...which means you can't buy a Gibson cover and put it on an Epiphone because it just won't fit right no matter what. And yeah, I'm certain this is done by design to make it more difficult for people to "reengineer" an Epiphone into a Gibson, so to speak.

I have no interest whatsoever in "reengineering" my Epiphone into a fake Gibson, but I do have interest in getting that big E on the headstock like the archtop Epi guitars have. It is an Epiphone, after all.

Fortunately, I found a cover for an Epi LP with the big E on eBay and bought it:

Being my Epi Les Paul Special I P90 I have is made in China and that this cover is coming from Hong Kong (which is part of the Republic of China), the cover should be a near-perfect if not a totally perfect drop-in (or rather screw-in) fit.

Was it easy to find this truss rod cover?

No, it wasn't. I really had to dig around to even find one, and that's why I was willing to pay $8.50 just to get the thing.

And by the way, if you were to buy a real-deal Gibson replacement cover for a Les Paul, guess what? That's 13 bucks at the time I write this. Yep, 13 bucks for a piece of plastic, and that's not including tax or shipping. So when you look at it that way, $8.50 (which was my total final cost) really isn't that bad. I mean, yeah, it is bad to pay that much for a dopey piece of plastic, but still... I'm still better off compared to buying the Gibson version.

Why is an E-logo truss rod cover so difficult to find for an an Epi Les Paul or SG?

Probably because with the exception of that one Junior guitar, nearly all Epi LPs have the truss rod cover actually state the model name of the guitar, such as "Standard" or "Studio" or "Studio PRO" and so on.

Why do I even want the big E on my Epi's headstock?

Well, first of all, my truss rod cover on my Epi is just black with no logo, so pretty much anything is better than nothing, looks-wise.

And of course I dig the fact that I'll probably be one of the very few Epi Les Paul owners that has an actual Epiphone E logo on the truss rod cover. A little bit a bragging rights there. Not much, but hey, it's cool. 🙂