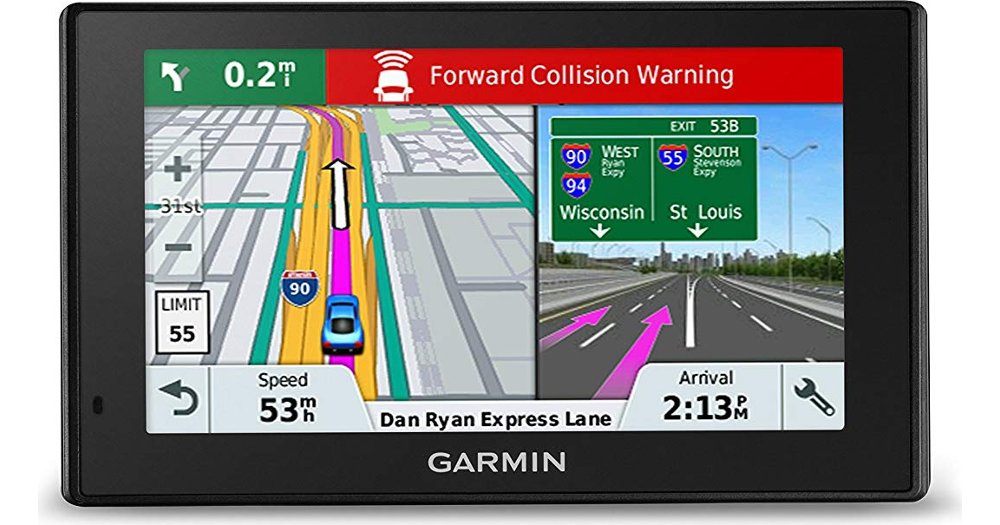 I'm a bit of a road nerd so I like this stuff. I'll be getting back to guitar/music stuff shortly, but for now, let's talk about this "obsolete" technology.

It's New Year's Eve 2018, meaning 2019 is right around the corner. I'm still using standalone GPS instead of smartphone navigation. The model I'm using currently is the Garmin DriveAssist 51 LMT-S.

I've been using GPS since 2005, and I've logged thousands of miles using nothing but Garmin GPSes. It started with StreetPilot models, then nuvi models, then the DriveAssist.

Briefly, just this year, I tried to make do with smartphone navigation. That didn't work out. Smartphones are simply not meant for cars. If the phone is mounted on the glass, it overheats from sunlight and that same sunlight makes the screen unreadable. If the phone is mounted on a vent, the glare is reduced, but then the screen shakes like crazy while driving, making the screen once again unreadable. And I'm not about to put the phone in the cup holder and listen to voice prompts, because I need to see that map.

Why do some say standalone GPS is obsolete?

Some believe smartphones are the answer to everything. They're not. See what I said above. In automotive applications, smartphones are absolutely terrible. The screen can't be read in daylight, it overheats, and/or it shakes like a leaf on a tree while driving. Useless.

Regardless of how many features smartphone navigation adds in, if the screen can't be read and the handset can't be used reliably under normal driving conditions, again, it's useless for electronic navigation while driving.

Older GPSes I keep around

I have a bunch of older Garmin GPSes I've bought over the years, but the ones I still keep updated every time there's a new map release are my nuvi 40LM and nuvi 50LM. The 40 is the 4.3" screen and the 50LM a 5".

These two models in particular, while really basic, have the best screens Garmin ever made. Even better than the DA51 mentioned above. Matte screen, very bright backlight, and polarized sunglasses friendly. For slim models, this was as good as it got, and there has been nothing Garmin has made since that's anywhere near as good.

There are times I do miss using the 50LM because the screen is so darned good on it, but I'm not giving up the dashcam I have on the DA51, so I continue using that for now.

Why do I bother keeping those older models updated? For backup purposes. The DA51 is my primary and the 50LM is the backup should the DA51 fail. If both those failed, I have the 40LM. And if for some ridiculous reason all of those failed, then I'd fall back to using my phone, but only as a last resort.

Updating maps for free if I couldn't use Garmin maps

The go-to solution for this is OpenStreetMap. I tried OSM maps a while back. They work, but are not as good as Garmin-issued maps are.

I would however still use a Garmin with OSM map data over a smartphone just so I have a screen I can read that doesn't shake while driving.

Will smartphones ever be good for use in the car for navigation?

As far as usable electronic navigation is concerned, there are three choices.

The first choice is using a Garmin GPS.

Second is an Android-based car stereo that has a GPS antenna in it. While basically the same as a smartphone, it's the best application of it in the car because it DOES NOT MOVE (meaning it doesn't shake while driving), doesn't overheat and sun glare is significantly reduced. You install an "offline GPS" app to the system, load it up with map data and that's pretty much it. Not an elegant nor an easy solution, but it's an option.

Third is buying a car that has GPS navigation in it already.

Choices 2 and 3 aren't inexpensive nor easy. Choice 1, using the Garmin GPS, is still the best option to go with for electronic navigation that's actually usable.

What should Garmin do for future automotive models?

If I had any influence over what Garmin should do concerning future automotive models, this is what I would say to them:

The big sell of standalone automotive GPS these days is dashcam. Go with that. Take something like the Dash Cam 45 and add in navigation with emphases on legibility. You already have the technology. Just look back at the old StreetPilot i2, i3 and i5 models.

All anyone wants is a little box that points them in the right direction. Use a 2D-only map view with big, bright colors (adjustable, of course), big arrows for indicating direction, easy-read text and numbers and stupidly easy menu options with buttons (no touchscreen) and that's the winner right there.

Basically, it's a flip-flop from the current lineup. Instead of "GPS + Dashcam", it's now "Dashcam + GPS". It's The Little Box That Could. It captures all the dashcam footage, and also gives basic navigation similar to what the i-series StreetPilot did.

Garmin, if you make one of these, I'd probably buy one.