It is impossible to enjoy yourself in an expensive guitar store 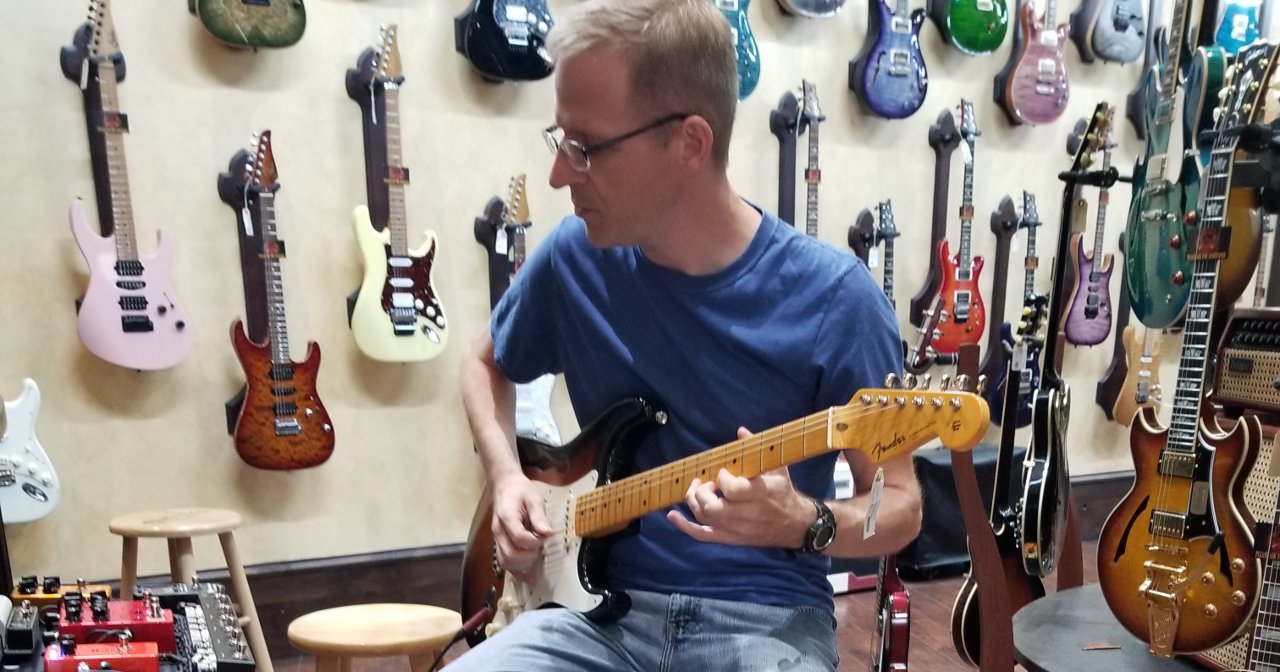 This is me playing an expensive guitar. And I didn't enjoy it at all.

Here's my review of the guitar:

At no point did I think to myself, "Wow, I could make some serious music with this." All I saw was the price tag, and that's what ruined the experience with what is one of the best Artist Series Stratocaster guitars Fender makes.

I know this guitar is a feat of engineering, even though I believe this model is a bad idea. It is a very trick thing that Fender was able to keep all the contours of a traditional Stratocaster body with semi-hollow construction. But again, that price tag just ruins it all for me.

Said very honestly, I had much more enjoyment playing this $149 Squier Bullet Stratocaster HSS at a Guitar Center: 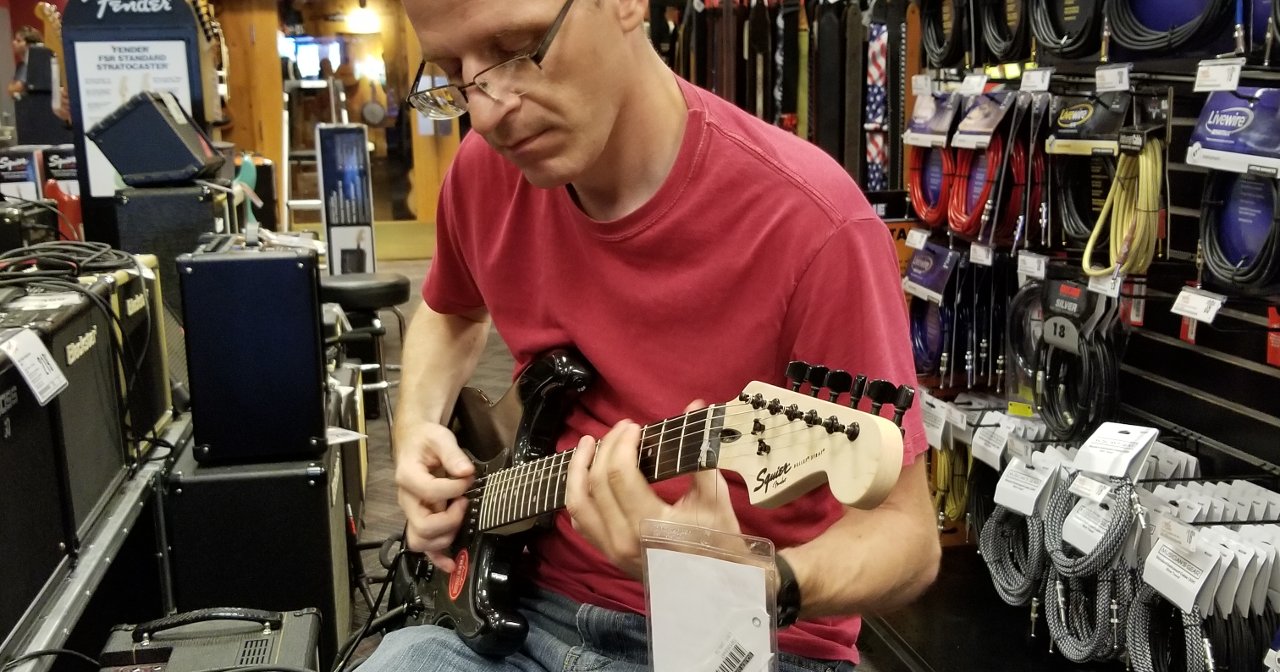 As is pretty much true on all Squier Bullet guitars, the neck was great on it. And it actually felt and played better than the highfalutin EJ Strat. It wasn't perfect, but hey, you can't really complain about a guitar that sells for 149 bucks new.

One would think it would be a dream to go into a store like this where all the guitars of your dreams (more or less) are right there, all sparkling, all in absolutely pristine condition...

The best word to describe the vibe of a ritzy guitar store like the one I went to is museum.

The floor echoed when you walked on it. The overall feeling was cold. I felt nervous in there. It was not a place for musicians. Rather, it was a place only for those with very deep pockets.

And, of course, you must ask to touch any guitar for sale. Pick up and play? HA! Not happening here, pal.

I cannot enjoy myself in a guitar store where every axe for sale is a high-priced trinket.

To give you an idea of what I mean by "high-priced trinket," take a look again to the photo at top. To the right you can see a Gibson. Specifically, it's a Gibson Johnny A Signature. How much? I'm not certain what the store was selling it for, but I'm pretty sure it's over 5 grand to buy it. To the left on the wall are a bunch of Suhr guitars. Those I do know the price of. They're all either close to or over 3 grand to buy. Each.

The EJ Strat was actually one of the "cheap" guitars for sale, if you can believe it.

Every guitar player has to make that one big purchase before realizing what a stupid idea it was. I've explained this before but will again because guitarists need to hear it.

You want to buy That Expensive Guitar. You've been eyeing it for some time, you want it and want it bad. But it's too expensive.

Buy it anyway. Get it out of your system. Do whatever it takes to buy That Expensive Guitar. Go right ahead. I'm not joking. Use cash or credit card or financing or whatever. Just do it.

After buying That Expensive Guitar, purposely wait until the return policy runs out. That's when you're going to feel the pain about what you bought. You just spent anywhere from $1,000 to $5,000, but your guitar playing didn't get any better, you don't sound any better and...

...UH-OH! Something went wrong with That Expensive Guitar. Yeah, you thought it would be perfect. Nope. You thought you were paying for "quality." Nope. It wears and tears just like any other guitar you've ever owned. In fact, it wears out faster because it's a boutique instrument.

You may hang on to That Expensive Guitar for a few months or a few years. But you will eventually sell it. And you won't get anywhere near what you paid originally. At best you may get back, oh, about 40%, and only if it's in absolute mint condition. Yes, that means you lose 60%. You thought car depreciation was bad? Ha! Boutique guitars are even worse.

What is a guitar that's worth spending cash on?

Easy answer: The guitar you build yourself.

Whether it's a parts guitar from pre-built pieces, or planks of wood you shape yourself, the guitar you build is the one where you can really make something special.

You can go cheap, go expensive or anywhere in between. The best suggestion I can give when building your own is this: Buy a pre-built neck, because the neck is the toughest part of a guitar build. And as I've said before, a neck is what ultimately makes a guitar good or not. Even a cheap pre-built neck is better than doing it yourself if you've never shaped a neck before.

Whatever you end up building, you will get much more enjoyment out of it compared to a multi-thousand dollar boutique electric.

At some point I will put together my own parts guitar (or at least try to just for the experience.) Squier guitars are great, but I do want to try my hand at a guitar build.

On a final note, I did at one point buy That Expensive Guitar. It was a Fender Jazzmaster. But that's a tale for another day.