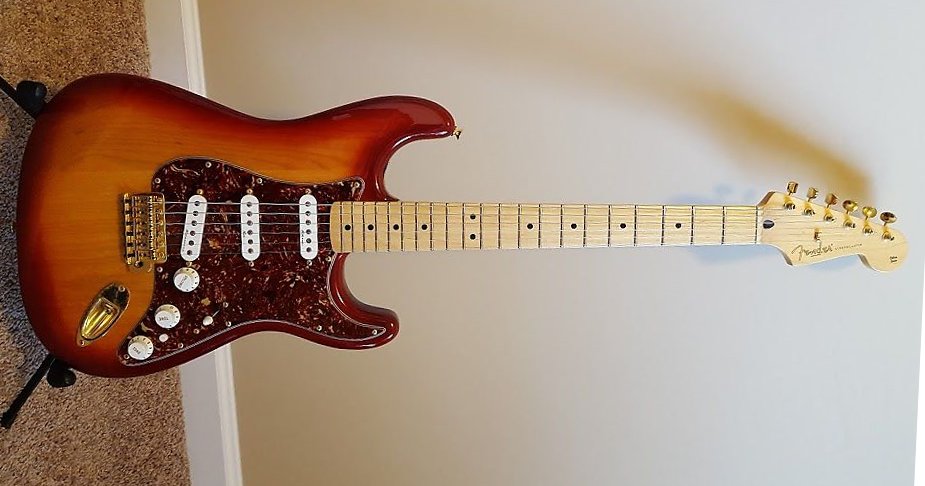 Buying used is always a risk. Buying any guitar over 5 years old is also a risk. But if you're willing to take the plunge, certain mid-2000s Fender Strats are dirt cheap right now.

Above is a 2005 Fender Strat Deluxe in Sienna Sunburst. And the price is $350, local pickup only out of Georgia (which is why I can't link it.) It's all original. Why so cheap? Because it's Made in Mexico, commonly known as a MIM Strat.

But don't worry, there are plenty of mid-2000s MIM Strats out there right now, many of which are in barely-played pristine condition selling for around $350 to $400.

To put this in perspective, a new Player model (which I assume is replacing the MIM Standard as it's not listed on Fender's web site anymore,) is significantly higher in price.

There are an untold number of MIM Strats in new or like-new condition collecting dust at guitar dealers all across America. And I can assure you that me writing about this publicly won't inflate the price of these guitars, because these dealers want them gone now.

The bulk of these MIM Strats are from 2005 to 2015, and it's not just the Standard. You'll find many models including Deluxe, HSS, HH and so on, with the majority selling for under $400 just to get them out the door.

Where you'll get the best deals are mid-to-late 2000s models, meaning 2005 through 2009. The longer these things sit at guitar dealers, the more desperate they get to move them.

If you decide to get one...

1. NEVER buy anything listed as "modded" and/or "upgraded"

This means the guitar has been screwed up by the previous owner. Always. Avoid these. Only buy a MIM in all-original condition.

If you want to mod/upgrade the guitar after you buy it, go right ahead. Just don't buy one that's been modded/upgraded by someone else.

2. There is no warranty.

All these MIM Strats are obviously well past their Fender 1-year warranty.

This means buy it to play and not to sell, because MIM Strats never have good resale value.