My nüvi 205 arrived today. So far I'm darn impressed. It's notably faster than the 270 was in every way, but what really matters are the features I've basically been wanted since I started using GPS, such as...

The Arrow of Truth 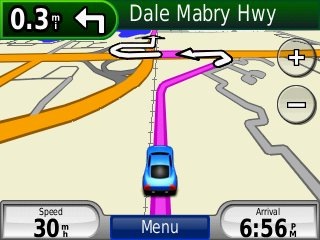 Pretentious title, I know. You'll know why in a moment. Note the top left of the screen. See that nice big white arrow on with the number next to it? That's the GPS telling me what direction the next turn will be. Unless you've used a GPS without this feature, you have NO IDEA how AWESOME it is to have it.

Above, the StreetPilot 2720. This is the one my father owns. Note the green arrow at top right. This is a discontinued model. Big. Huge. Bulky. 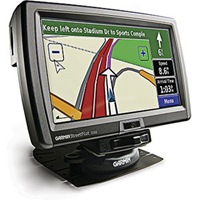 Above, StreetPilot 7200. Same deal, has the top-right arrow. This is soon to be a discontinued model. Thought the 2720 was big? This is even bigger, as in 7.5 inches wide big. Way too huge to be used in anything but an RV.

It took Garmin years to get that stupid arrow present in discontinued models to appear in a smaller and currently new nüvi 205.

Ridiculous? Yes. But better late than never, I suppose.

Yet again something else that was in the big-ass StreetPilots that finally made its way to the smaller units, categories. 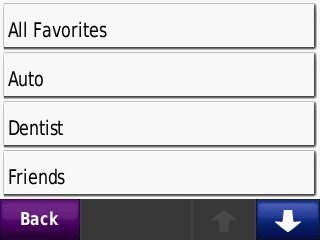 The problem with all "c" series StreetPilots and a ton of nüvi models is that all of your Favorites are lumped into one huge and completely unmanageable list (which you still can't alphabetize, by the way).

With categories, you just assign them however you like. This makes it so much easier just to find stuff. After a while your Favorites list gets huge, right? Right. And it gets to be a mess in short order, right? Right. Not with categories it doesn't.

This is yet another ridiculously simple feature that should have been included in all GPSes from the get-go.

It answers a stupidly simple question: "WHERE THE @#*! AM I?"

Oh, how I could have used this when I had to call AAA a while back. Instead of guessing where I was, it would have be so nice just to hit the "Where am I?" and say "A-HA! I am HERE! Come fix my flat tire, kind sir!"

My final notes for now

This is in fact the first Garmin GPS I've owned that actually has new features I actually care about. This doesn't have text-to-speech, nor does it have an MP3 player, no Bluetooth ability, none of that crap. It's just a nice easy-to-use fast-performing GPS.

My brief history of me and GPS (and the mistakes I've made along the way):

First GPS, StreetPilot i3. Great little unit. Still have it. Still works. But wanted a touchscreen.

Second GPS, StreetPilot c340. Specifically bought that model because I wanted text-to-speech. Dumb idea because it sounds way too "computery". Could have saved almost 100 bucks at the time had I bought a c330 instead. I sold this unit last year.

Third GPS, StreetPilot c580. Needed an anti-glare touchscreen after quickly finding out the c340's screen with no anti-glare was absolutely worthless in Florida sun. Stupidly went for the c580 because the MSN Direct content sounded "cool". Oh, how wrong I was. I still have this one as a backup.

Fourth GPS, nüvi 270. Got doused in carpet cleaner on accident. Screen is semi-wrecked with splotch marks on the inside. Power button permanently screwed up. My fault completely. I have no clue what I'm going to do with this thing now. It does in fact still work (there's not even any dead spots on the touchscreen, surprisingly), but has to be operated on power cord only because you can't shut it off and the screen is semi-messed up as mentioned. Maybe someone will be willing to buy it for 35 bucks? That's about what it's worth. I still have the original box, manual and everything for it. If nobody is willing to buy it I'll have to toss it in the trash.

This one I will be keeping for a good long time - and far away from carpet cleaner. 🙂