If my memory serves me correctly, the last time I went to Disney World's Magic Kingdom was when I was 12 years old, which is close to 26 years ago.

My sister was attending a veterinary conference in Orlando, and since Disney is just a few miles away from that, we planned a Disney trip because as far as I can tell, she hadn't been to Disney since she was 9 or 10.

Well, I live in Florida, Disney was right near the conference and it's something I just wanted to check off my "to-do in life" list. 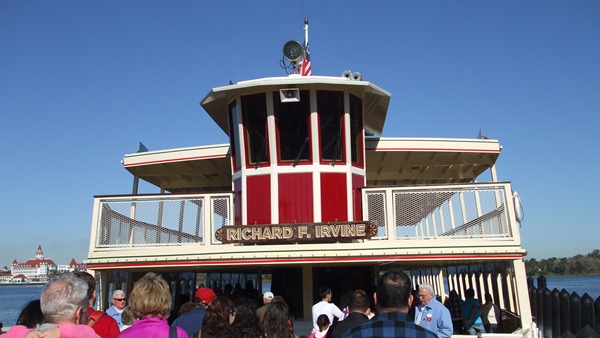 This is something I hadn't remembered doing before. When you enter the Magic Kingdom, you have the option of traveling from the ticketing area to the main park either by monorail or ferry. I took the ferry because to the best of my memory I hadn't done it before. 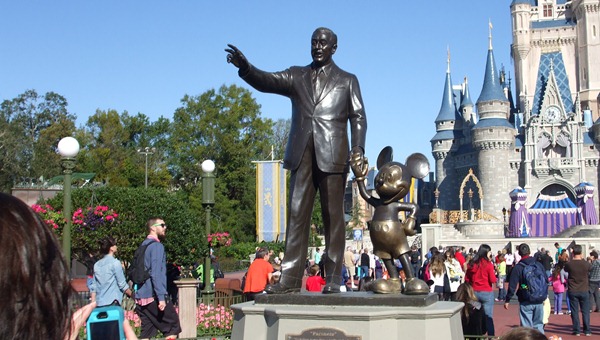 When you first enter the park, you're on "Main Street USA", and smack dab in the middle is the Cinderella's castle with a statue of Walt and Mickey in the front of that.

It's a bit smaller than you think. Looks taller in photos. 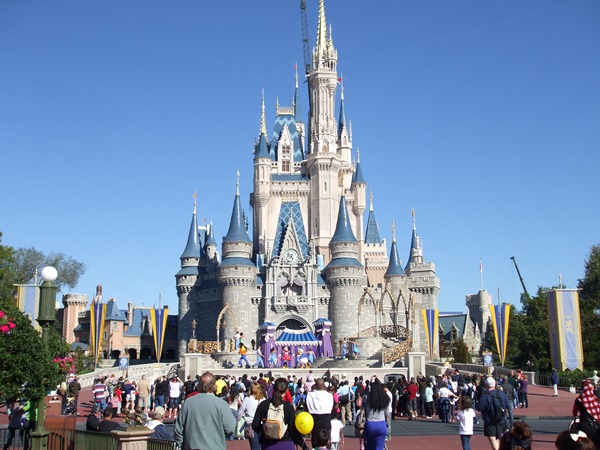 Yeah, that is a crane you see in the back of Cinderella's castle, and that really made the thing look terrible. It was there because there's a new ride being built behind it (something to do with the Seven Dwarfs.. looked like a roller coaster). You can also see another crane to the right. Since this is off-season they just leave the cranes out there. Were this summertime, I'm sure no cranes would be visible.

In the front of the castle is a performance area where people dressed up as famous Disney characters perform shows - and I think that happens 3 or 4 times a day.

The show includes a disco number. Yes, seriously. They even make sure to say that in the show dialogue. Weird, but.. whatever. 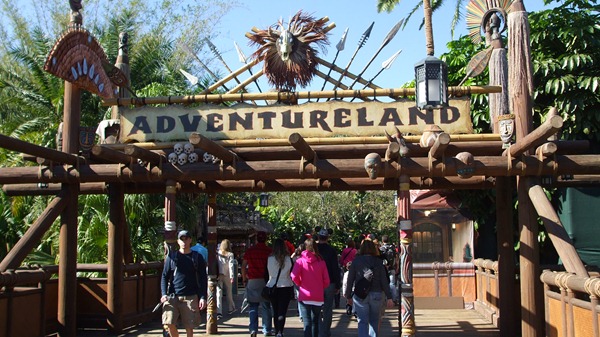 Magic Kingdom is divided into "lands", such as Adventureland, Frontierland, Tomorrowland and so on.

Pirates of the Caribbean ride 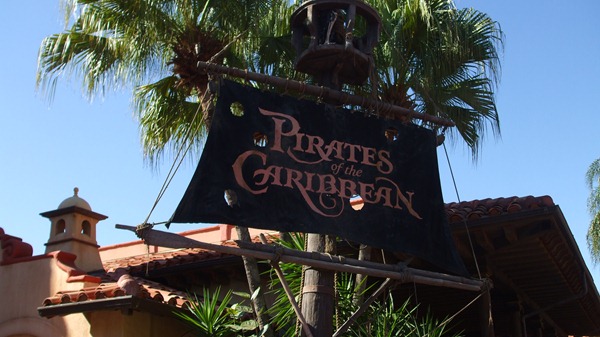 This was something that obviously wasn't around when I was a kid. It's a slow ride where you're meant to see animatronics and so on, and it's actually pretty good. 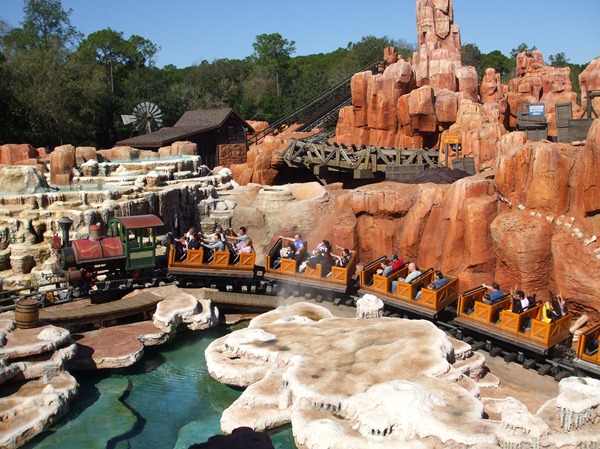 This and Space Mountain (mentioned in a moment) are Magic Kingdom's two best roller coaster rides.

I actually have a really interesting story about my experience with Thunder Mountain.

Okay, first, it was a 45-minute wait to ride the thing. During the wait, some poor woman standing in line fell on her ass and hit her head where staff had to be called to help her out. Then after that some kids tried to cut the line. Then after than some more kids tried to use the "fast" lane (people pay extra for those ride tickets) when they didn't have those type of tickets and got caught. Then if that weren't amazing enough, this happened: 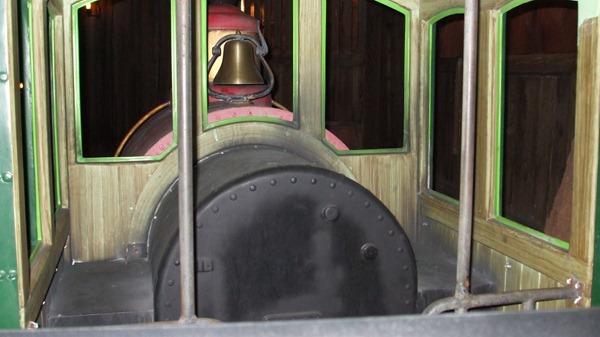 Sis and I got the front car of the coaster.

This NEVER HAPPENS because you have to take wherever the staff seats you on the ride. But we got the front. And it was awesome. 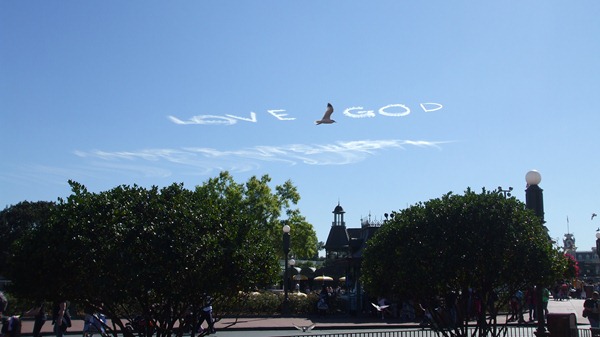 I'm not posting this to be religious or anything; I'm posting it because this is a one-in-a-million shot.

During the day we went, it was a crystal-clear blue sky day with no clouds. Some pilot decided to take out his bi-plane and do some skywriting. This obviously was not planned by Disney because of the religious message the guy wrote.

First he wrote "JESUS" (which is in the shot but almost faded away) and then he wrote "LOVE GOD" after that. But the killer part I got that I didn't even realize until I came home is that when I snapped the photo, I caught a bird in flight right between "LOVE" and "GOD", with wings spread perfectly: 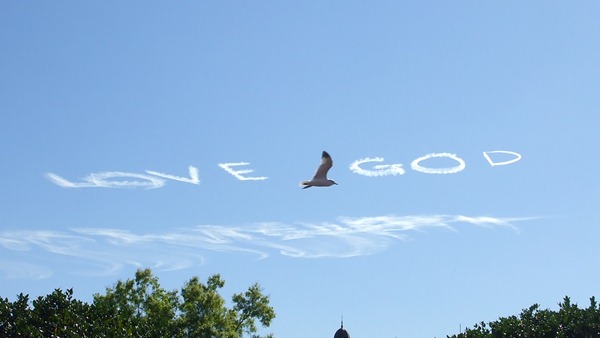 How amazing is THAT?

I mean, think about it. What are the odds that a) The day you go to Disney is a perfect no-cloud day, b) Some guy decides to do some skywriting on that day, c) The lighting conditions are 100% perfect and d) When the photo is taken you catch a bird perfectly positioned between the two words AND is in perfect focus?

Like I said, it's one-in-a-million shot. Probably one-in-a-billion now that I think about it.

If anyone wants to license my photo for a poster or postcard or something, email me, because yeah, the shot is that good and I've got a full-res version of it. 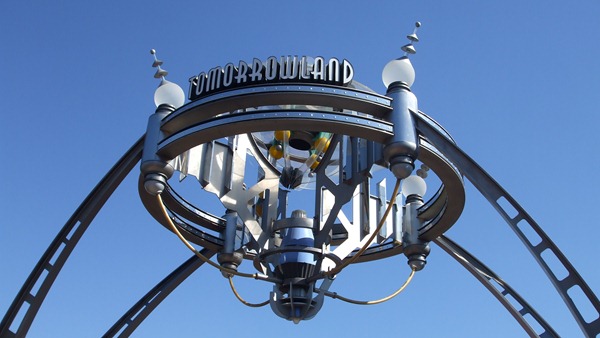 This is the entrance to Tomorrowland. Kind of kitschy because "tomorrow" is defined as "everything looking spacey and chromed', but whatever, it works. 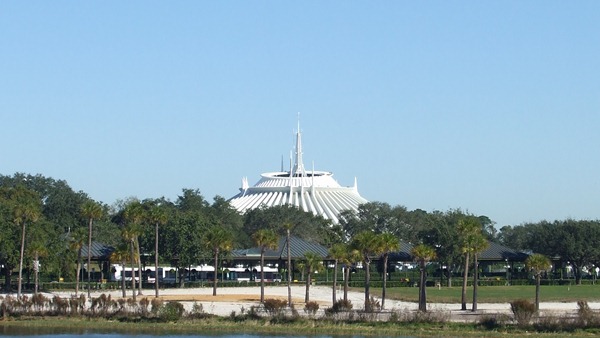 This was actually a shot from the ferry.

Architecturally speaking, Space Mountain is a sight to behold. It has a very distinct look that to this day has a futuristic feel to it. Whoever designed it originally is a genius because it doesn't look weird or out-of-place or anything like that. It looks like it's supposed to be there and something you want to go see.

And here's where I actually describe both the Space Mountain and Big Thunder Railroad Mountain roller coaster experiences.

From the memories I had as a kid going to Disney, I could distinctly remember that both these rides were slow, so that's what I was expecting.

But that didn't happen at all.

Both Space and Thunder were ridiculously fast and not anything like I remembered. And believe me, it's not just because I'm older that I'm saying this, because remember, when sis and I hit Islands of Adventure back in 2011, we specifically went for front row seats at the Incredible Hulk roller coaster - and that thing is known to be seriously speedy but at the same time very, very smooth. It's one of the most perfectly-balanced high-speed coaster rides you can take.

Thunder was being run quick that day, and somewhat too fast but not bad.

Space was being run way too fast. The way Space Mountain does their seats is that it's pod style with four seats front-to-back (nobody is sitting to your side). And it's a very jerky, very jarring track. Had they run it 10mph slower, it would have been fine. But they rammed those coasters down the track.

The reason Space is so jarring is simply for the fact it's old and the coasters can't handle the turns as good as they used to. The ride, said honestly, is not balanced correctly and needs a major overhaul. With Thunder it's okay if the track is a little rough because that goes along with the "rickety old speedy train" thing, but as for Space, that's supposed to be smooth and it's definitely not.

In other words, with high-speed coasters there's good-fast and bad-fast. Space Mountain that day was bad-fast.

My thoughts on Disney as an adult theme park goer

I say "as an adult theme park goer" because going to Disney as one of those and not as a kid or a parent (which is how most adults visit Disney) is different from going just as an adult park goer.

The magic of Disney came from something that Disney had nothing to do with, that being the skywriting thing I talked about above. That was a real, genuine magical moment.

As for the rest of the experience, yeah it's good. Magic Kingdom - which is one of several parks at Walt Disney World, as there are a few others like Animal Kingdom and Walt Disney Studios - is an interesting experience.

A lot of what makes Disney magic is Florida itself. See, I live here in Florida and have been doing so since the mid-2000s. I see the palm trees and experience the near-perfect weather almost all the time. So when I go to a Florida theme park now, the experience is totally different for me because I already know what typical Florida living is like.

If you take Florida out of the equation, one could say that Disney World is way, way too commercial. I partially agree with this only because I went there during the off-season.

The difference between off-season and on-season Disney is the amount of effort they put into giving their patrons are genuinely magical and entertaining experience.

For example, if you go to Disney in, say, July, you'll see lots of street performers inside Magic Kingdom. But during off-season they have little to no presence, so all you see is the park and have barely any human interaction from other park employees and performers. The end result of this is a somewhat disconnected Disney experience.

Were I to give the park a rating on a scale of 1 to 10, I give Magic Kingdom a 6, which is to say the experience is slightly above average on the entertainment value. Now of course you'd think that Magic Kingdom would rate a 10 all the time, but that all depends when you go there. Go in January like I did, and MK is a 6. Go in July or August and MK is an 8 or a 9.

I did spot several things in MK that Disney could do to improve the place and bring it to "10" status all the time.

Here's one that immediately sprang to mind: Put pirates on the ferry. One or two or them could hide in the control room and then just walk out when the ferry is underway, start a song, chat up the guests, etc. This would be stupidly easy to do, wouldn't cost the park any money to do it, and makes the experience right from the get-go just plain fun (read: magical). Or heck, they wouldn't even to hide. Three of them could be yelling out a song in plain sight on the upper deck (or even sitting on the roof, which would be cool) when the ferry is docking. One could even be playing a lute. It would be freakin' AWESOME if that actually happened because that's real magical-style entertainment.

If Disney wanted a "10" park for Magic Kingdom, I could totally make that happen. And I could do it within budget just by reorganizing existing talent and resources. Heck, I could probably even save the park money with reorg'ing it just right.