If I were to tell somebody from my stomping grounds how to get to Tampa from there, the directions are so simple it's ridiculous.

It is literally a three step route even though it's over 1,000 miles in length. I-395 to I-95 to I-4. That's it. Yeah, it's a really long trip, and I've obviously done it, but heck, the directions to your local corner store probably take more steps to get there.

I've traveled most of I-95, which is 1,925 miles long by the way. The only parts I haven't are at the most northern points of Maine and most of Florida because it hugs the east coast side and I'm on the west.

An oddity concerning the State of Florida is that there is no north/south interstate in the middle of the state from Orlando southward. 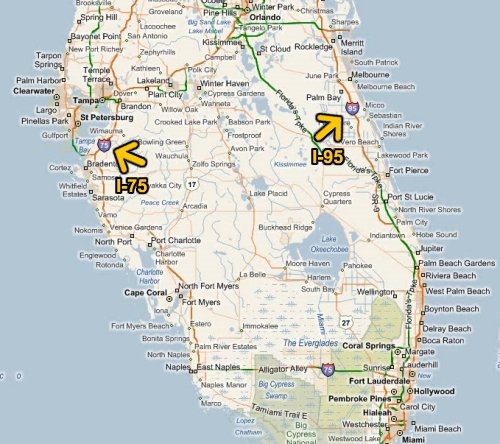 Absolutely frickin' no interstates from Orlando mid-state until you pick up I-75 again in the Everglades waaaay later.

There is literally only one road you can take mid-state southward after Orlando if you want to stay in the middle, and that's Florida US-27.

US-27 is one long boring-ass road; it hearkens back to the days of when smaller roads actually mattered. In this case it does because it's the only major road going north/south after Orlando that sits mid-state. Much of it is two-lane only and you'll see lots of farms. This is the kind of road where you can suffer from highway hypnosis easily.

I have no intention of traveling US-27, and thankfully there's no reason for me to do so. 🙂