That's a lot of lumber 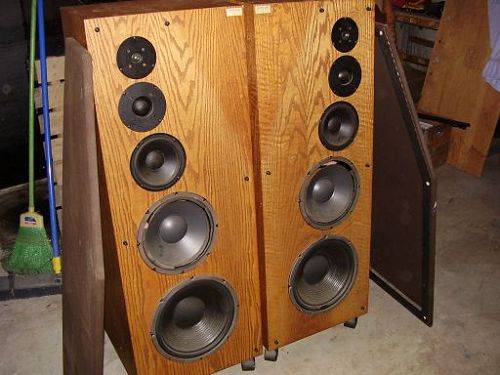 These are my late grandfather's speakers which were given to me along with some other things after he passed away. Shot taken in my basement. Supposedly they were $2500.00 each. I tried selling them on eBay for $300 for the pair but no one would buy them.. so.. maybe it's a sign I should keep them. Most of the speakers are blown as you can see, but they can all be replaced.

These big 4-foot-tall oak boxes were made at the time when big speakers were the proper way (and still are) to push sound. They're true 5-way with Infinite Slope technology built-in, and they're 100% U.S.A. made. In short: These loudspeakers could fill an auditorium easily but at the same time are "civilized" enough to be used in a living room.

The largest problem will be finding replacement cones. Back in the day you could have replaced every single speaker at Radio Shack, but now they don't carry cones any longer - at all. Major department stores like Wal-Mart and K-Mart don't carry them either. It's going to be a challenge to find cones, that's for sure. It'll probably cost around $200 per box (or more) to replace all of them. But it's not like these boxes are going anywhere. I have time. (grin)