Getting beyond the Golden Shield

One of the hottest markets for blossoming technologies is China. Anyone that knows anything about what's going on in the world these days knows that China is very important. However when it comes to Internet companies, most of them have it all wrong. And I mean crash-and-burn wrong.

I author a secondary blog just for the fun of it on a social media site that isn't banned in China. On there I posted this simple article:

What is your favorite social network?

In the USA, the most popular social network is Facebook. Before that it was MySpace. There are also many here that use Twitter, although that is more of a micro-blog than an actual social network. For video, we use YouTube the most.

What social web sites are used in other countries the most? In China I hear that QQ is the one most used and Youku is the largest video site. Is this true?

The title of this article mentions Golden Shield. This is in reference to the literal Golden Shield Project, sometimes known as "The Great Firewall of China".

The #1 social network in China is QQ. You can consider it China's Facebook. It has 80 million+ users and is deeply intertwined into Chinese Internet culture.

Youku is the #1 video sharing site in China. While QQ is China's Facebook, Youku is China's YouTube.

The comments I've received on that lil' blog post above have been interesting, to say the least. Here's a few of them:

From this I now know that both YouTube and Twitter are blocked, which means that if you use either one of those services, Chinese citizens will never see it, or at least not as long as they're blocked by Golden Shield.

As far as YouTube is concerned, I understand why they're blocked because Google completely screwed up their relationship with China. They've been handling it very badly and I seriously doubt the relationship will ever improve over there.

The day I write this there's a whole crapstorm going on as to whether Google and all its products are blocked in China. Some say yes, Google says no, blah blah blah. Whatever.

As far as I'm concerned, if you intend on having any international presence that includes China, you have to be aware of what's permitted via Golden Shield, else you miss out on a huge moneymaker.

Believe me, there's lots of cash to be made by having an online presence in China. Don't worry, I'm not telling you to pack your bags and move there. What I'm saying is that China is a market that cannot be ignored. They do matter. Big time.

First, I've decided to go back to what's called a boxed theme for this blog (defined width instead of fluid full-width).

Second, the sidebar has been removed.

Third, my lifestreaming stuff has been moved to the bottom of the home page - but won't appear on any other pages here unless I change my mind about that.

I'm also entertaining the idea of making a logo for this site.

As far as the actual content of this site goes, that's more or less going to remain the same as a mixed bag of personal (like this one) and "pro" with my AC stuff - as soon as I get around for writing more stuff for that medium. 🙂

Given the fact my temporary D-Link router is a bit wonky when it comes to Wireless G, for kicks I purposely set it up to only accept Wireless B connections.

What I noticed was pretty interesting.

On G, the best possible signal I can usually get in the other room where I use my laptop is around 70% no matter what wi-fi router I use. That is 5 bars and strong, but it bugged me that I couldn't eke out any more signal considering I'm so close to the base.

On B, the signal is a solid 100%. This makes no sense considering B and G both use the same 2.4GHz freq, yet I have full-green across the board.

On top of that, I also noticed that B really isn't that bad at all concerning speed. I mean, yeah, it's notably slower compared to G, but the only thing I really couldn't do well was stream YouTube videos. Other than that I was able to mosey along just fine. The only time I really noticed I was on B is when downloading large images.

To give you an idea of how much wi-fi network traffic is around me, at any time there are usually at least four to five other routers aside from myself in range: 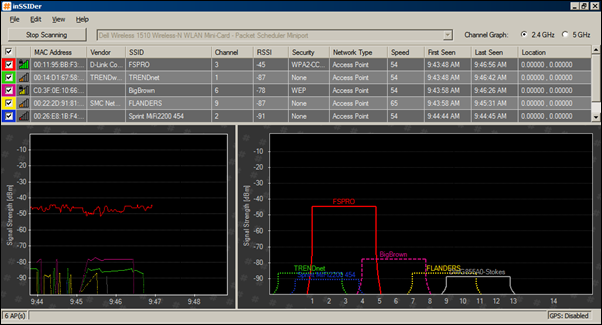 Mine is the red one.

A main reason why I cannot get anything over 70% signal strength on G is because I'm always fighting a crapload of other 2.4GHz G routers.

You probably noticed a couple of the routers above are completely open and have no security on them. Those are from neighboring apartment complexes that offer free wi-fi, and in fact I can connect to them even from inside my own apartment. It's a very weak signal, but I can do it and surf the 'net successfully. It's cool I can do that just in case my primary Internet goes out for whatever reason. The drawback however is that those super-powerful routers mess up my signal from my own router.

This brings me back to B. Why is it that I can magically get 100% signal strength on B and not G? Remember, it's the same 2.4GHz freq, so it shouldn't happen - yet it does. Is the fact almost nobody uses B a factor here? I have no idea.

The knowledge I'm taking from this is that if I'm ever in a situation where there are so many G routers that I simply can't connect, I can purposely force B-only connections and it should work.

On a final note that has nothing to do with the above, if you do have a bunch of wi-fi routers near you where you know people will periodically see your SSID, you can have some fun with that. Change it to something like "PARTY OVER HERE", "ZOMBIE ATTACK - HELP ME", "I AM READING YOUR EMAIL" and so on. An SSID can be up to 32 characters long (including spaces), so if you have the audience, so to speak, go for it. 🙂