Being a left-handed guitar player can suck sometimes

Did you know I'm left-handed? It's true. I play right-handed, but I am a lefty.

Above is a left handed Fender Standard Stratocaster in Brown Sunburst. Does Fender make a bunch of Strats in lefty? Of course they do, both for Mexico and American models.

Being a lefty player can suck because the selection of guitars available is very little compared to righty guitars. Every lefty knows that it's a righty's world when it comes to electric guitars or guitars in general.

Squier is actually one of the most accommodating brands for lefty players. For example, the lefty Squier Classic Vibe '50s Telecaster is for all intents and purposes the best damned Tele a lefty could buy. Why? Because more often than not, a Fender version either doesn't exist, is priced way too high to be affordable, or simply isn't available anywhere.

Want to know the only lefty Telecaster that Fender makes with the ashtray bridge on it? That would be the American Vintage '52 Telecaster lefty - if you can even find one. The Squier on the other hand mentioned above (which also has the ashtray bridge) is available for lefty players right now. Squier saves the day once again. And yes, lefty players, if you love Teles, you will love that Squier CV. Go get one. Don't bother waiting for that Fender to appear unless you want to throw $3,000+ at Fender Custom Shop just to have one made.

I received an email recently from a lefty player asking about Gibson USA Les Paul models. Specifically, the Les Paul Studio Pro. When I did my research on it, there have been lefty players not only asking but outright begging Gibson to make a lefty version of the 2014 Studio Pro model. I swear, from what I saw out there, lefty players were ready to throw money at Gibson just to have one made.

The 2014 Studio Paul exists as a lefty, and that literally just happened this month as certain online music instrument retailers are taking preorders for them now. But as for the Studio Pro, nope. Of course, the one the lefty players actually want is the one Gibson didn't make.

Will Gibson make it? I've no idea. Maybe they will, maybe they won't. Gibson is not talking about it. Do they even care? I don't know.

On the Les Paul side of things, I tell lefty players not to buy Gibson. Instead I recommend Rondo, as in the Agile AL series guitar. Seriously, where else can you find a lefty Les Paul as good as the AL? Nowhere. Rondo makes the lefty Paul for just 500 bucks that left-handed players want, and it even comes with a case. I dare any lefty player to find something better that's available right now with no waiting. You won't.

On the SG side of things, Epiphone has lefties covered with the G-400 PRO in cherry. True, it's not Gibson, but the price sure is right, it has the smaller pick guard and totally looks like a Tony Iommi guitar. The PRO model in particular plays and sounds as good as it looks.

What is available for lefty players that is cheap?

Squier and Dean pretty much own this market.

Squier has a lefty Telecaster for under $200 and a lefty Stratocaster for a little more. Dean has the lefty Vendetta.

Are lefty guitars that sell for less than righty guitars cheaper in build quality?

A common belief guitar players have is that "if it's cheaper, it must suck". Wrong. And especially wrong when it comes to lefty guitars.

For example, this Honey Burst Left-Handed American Standard Stratocaster is just $900 new at the time I write this. Yeah, this guitar should be $1,200, but it's $900. Why? It's most likely a display unit that never sold where there's absolutely nothing wrong with it, but it's just got to get sold because now it's taking up space.

You can find really good deals on Fender American Standard left-handed guitars quite easily. You'll be surprised in a good way what you'll find. Sometimes it's better for a left-handed player to just go for the high-end stuff because a lot of it can be had for fire sale prices since retailers have a tough time selling them. 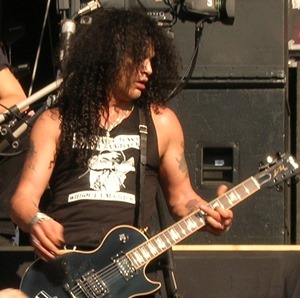 This is one I've been requested to write for a while now, so, here it is.

END_OF_DOCUMENT_TOKEN_TO_BE_REPLACED

I was talking about Rickenbacker electrics and their 12-string offerings recently, so I decided to take a look at what was available for cheap electric 12-string guitars.