I requested a specific gift from my sister this year - to take photos of the stomping grounds because there's been some changes since I left.

She came thru and delivered 26 photos. Here are the ones that stand out the most. 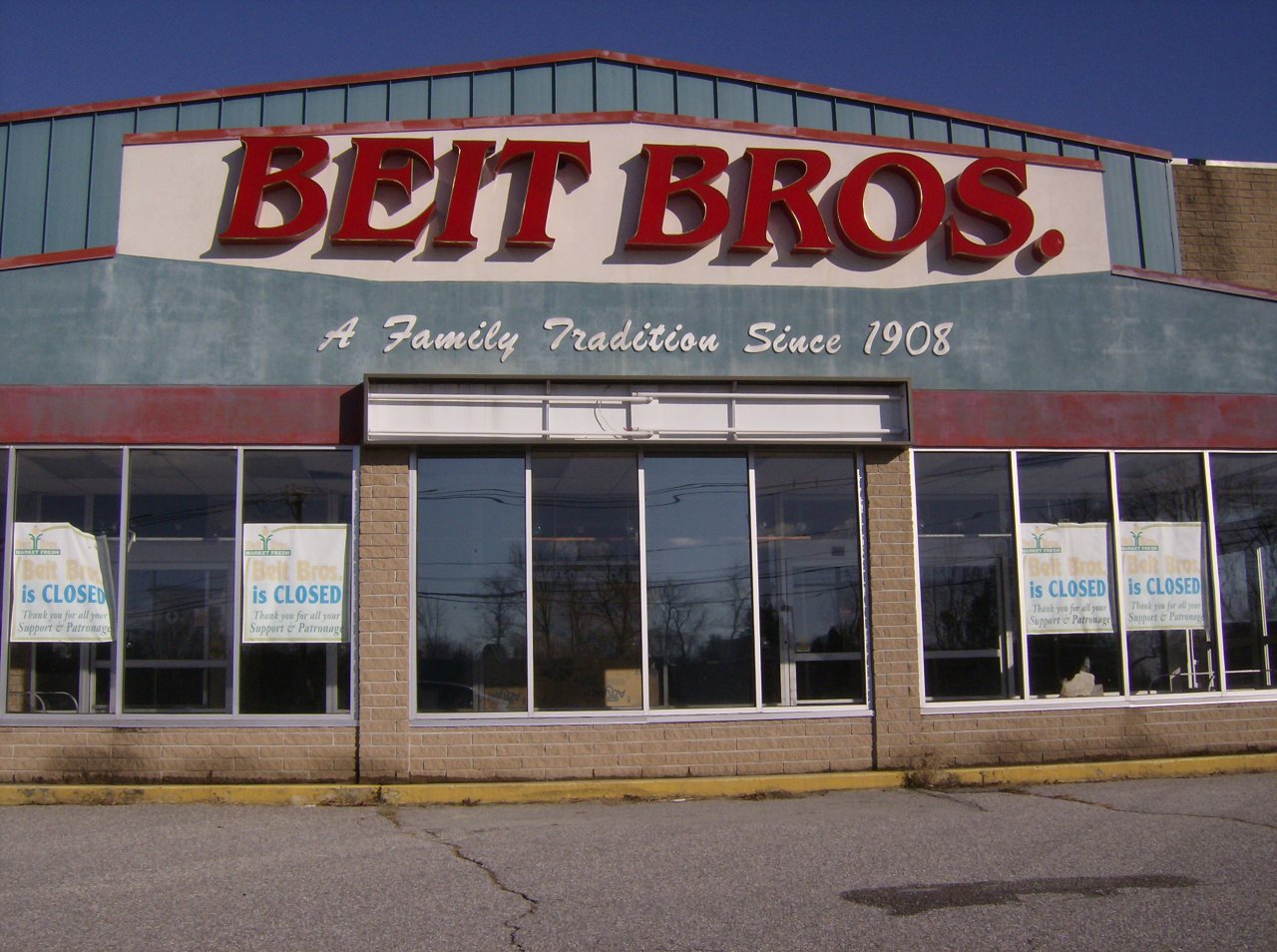 Above: This was the local market in Dayville; it closed fairly recently (less than a year ago). In all the years I remember it being open they only changed the sign once.

After larger markets opened nearby like Stop & Shop, Big Y and Price Chopper, this market didn't stand a chance of surviving and closed its doors.

There is one other Beit Brothers market still open that I believe is in Uncasville CT. 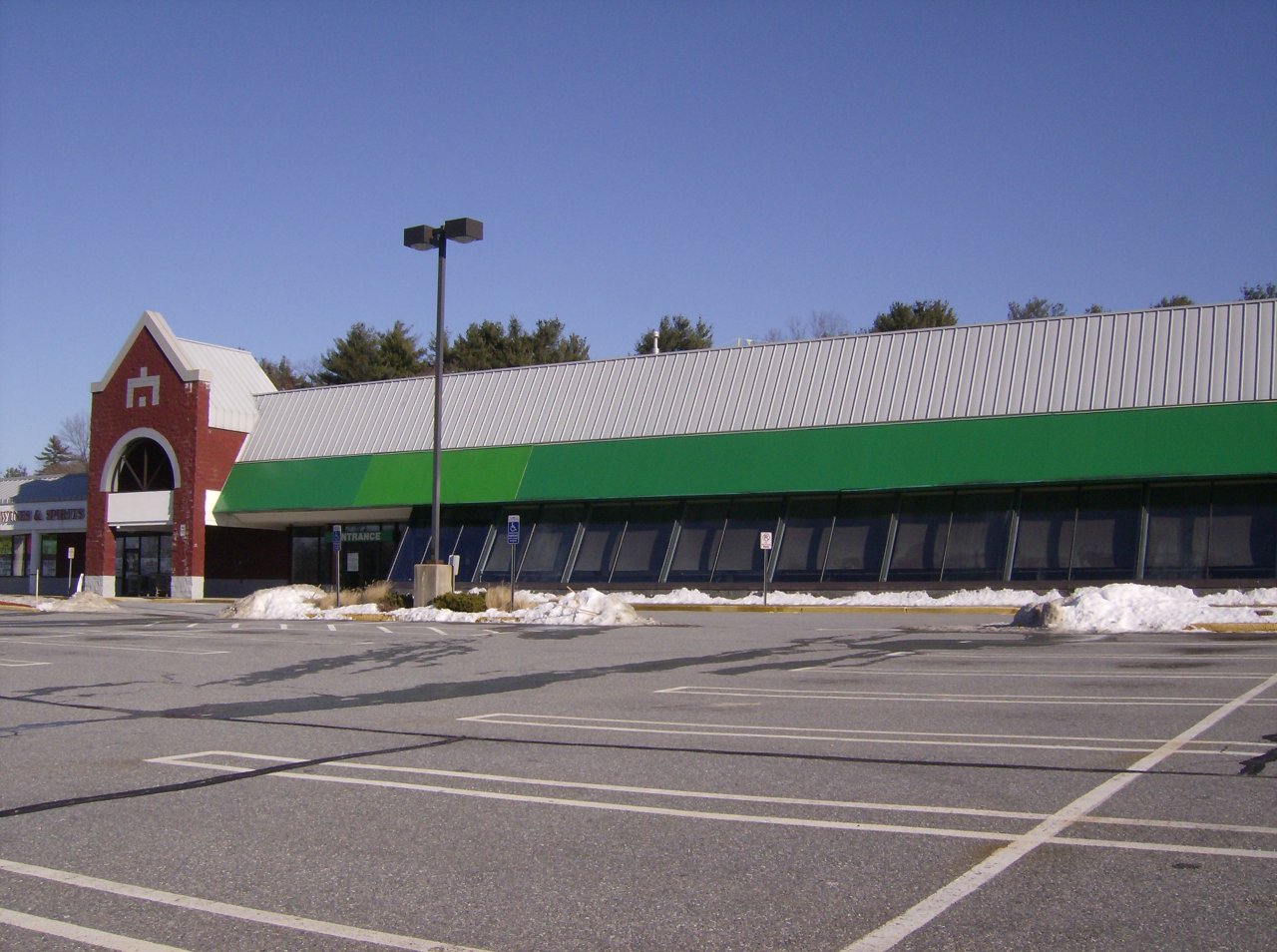 Above: This is where the old Stop & Shop used to be. They moved into the Killingly Commons.

The single largest problem I have with them moving is this:

Killingly Commons was built on the old Anchor Glass Container property (closed many years ago some time in the late 1980s). Being that property was essentially nothing but a clay pit, there were no trees downed or anything like that, so no harm no foul. There was literally no nature worth saving on that plot.

The land the original Stop & Shop was placed on was originally all grass and trees (obviously) and was developed for business. The end result is that all the grass and trees were destroyed for a large market that moved into a clay pit. 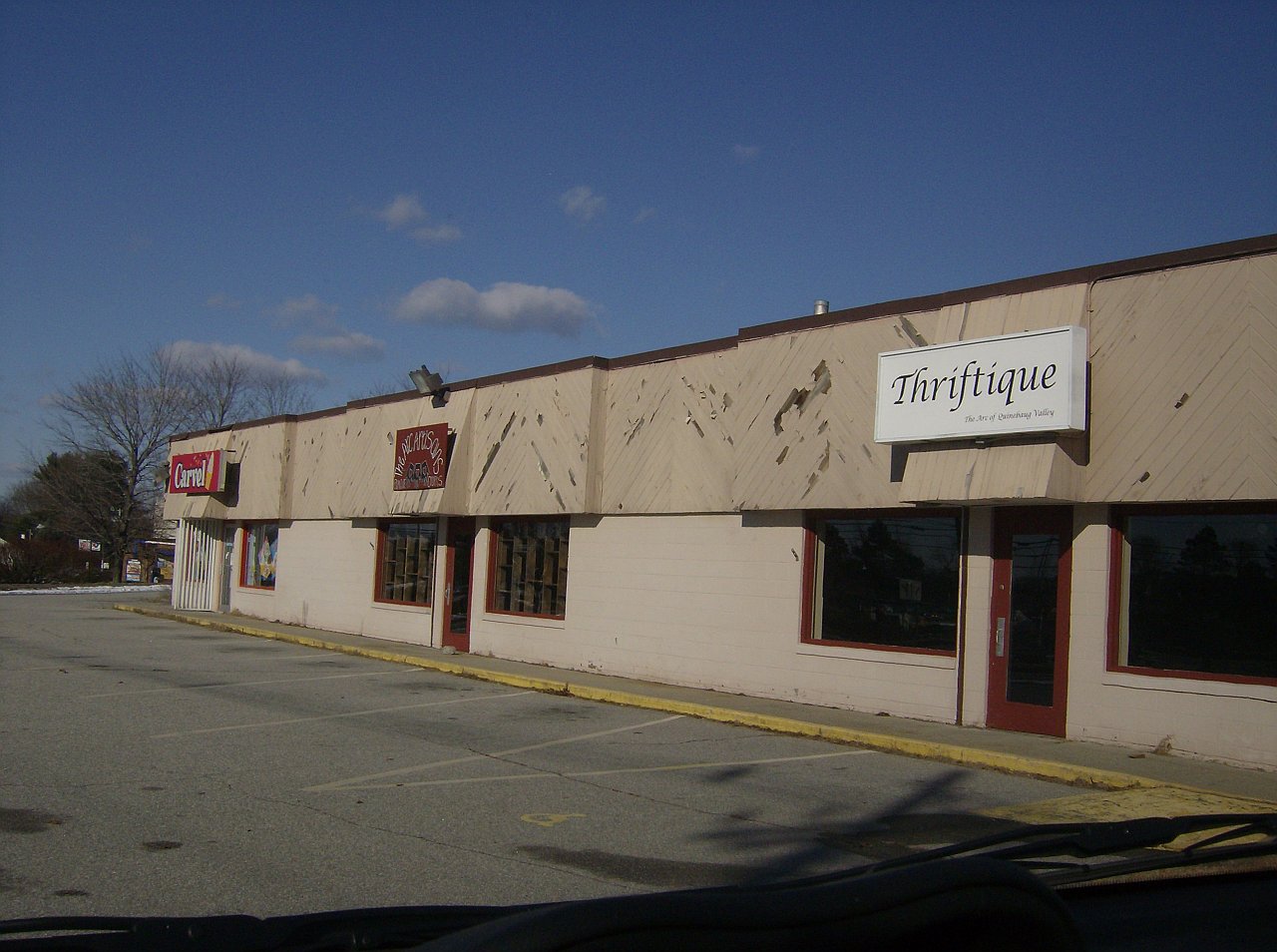 Above: Carvel ice cream is (as far as I know) a staple of New England. If you wanted the best ice cream money could buy, you went there.

In the above picture, the old Carvel is on the left, followed by two other stores in the same building. All are closed and the building is wrecked as is evident by the broken/worn siding. 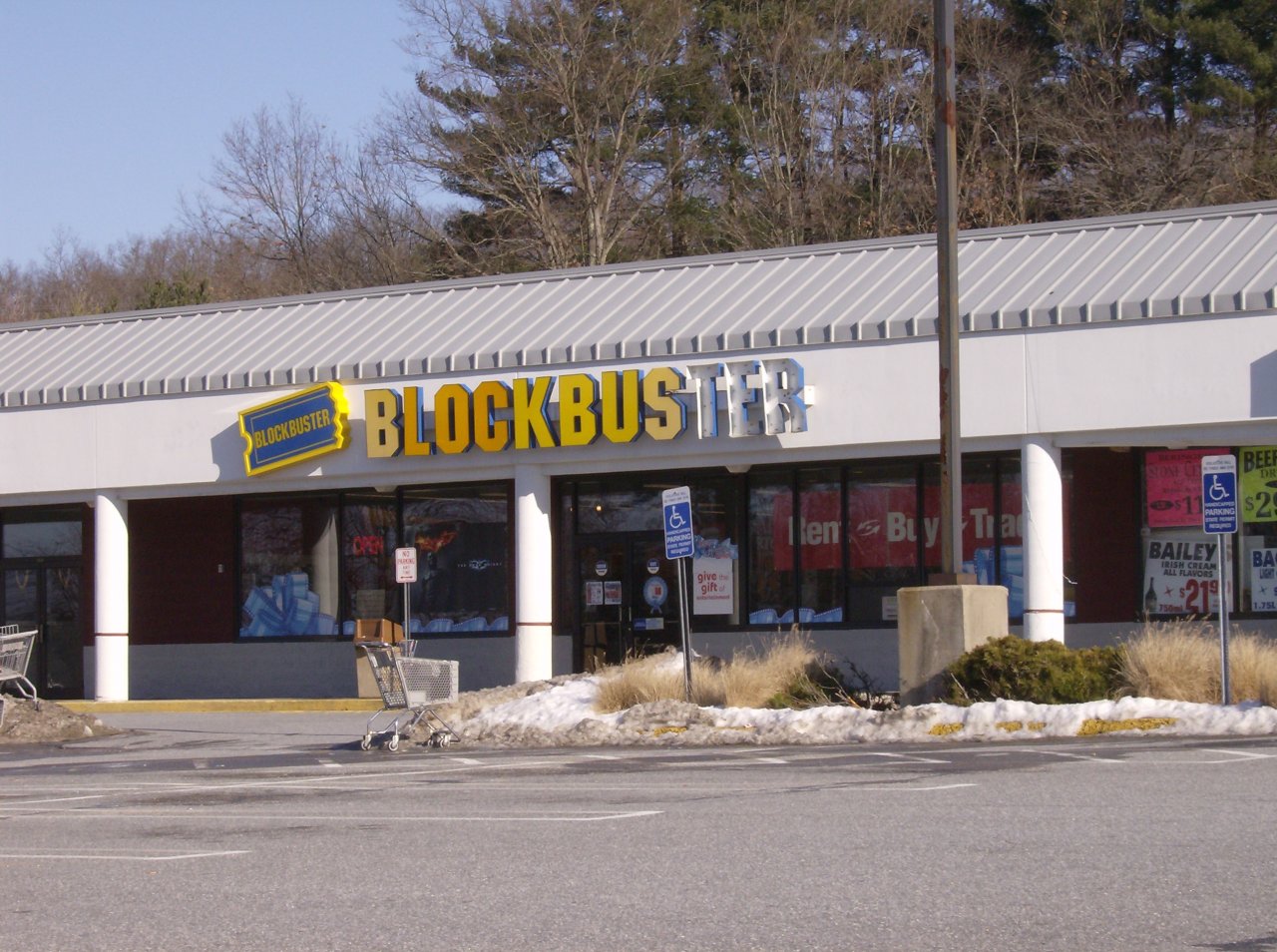 Above: This Blockbuster is still open but the photo shows how much national franchises do not give a crap when in Killingly or anywhere in Windham County. The sign is damaged and worn. The lettering is faded (notice the LOC in the word BLOCK is orange compared to the rest which is yellow) and shopping carts from the old Stop & Shop are still there even though they moved. No one cares and most likely no one will remove them. 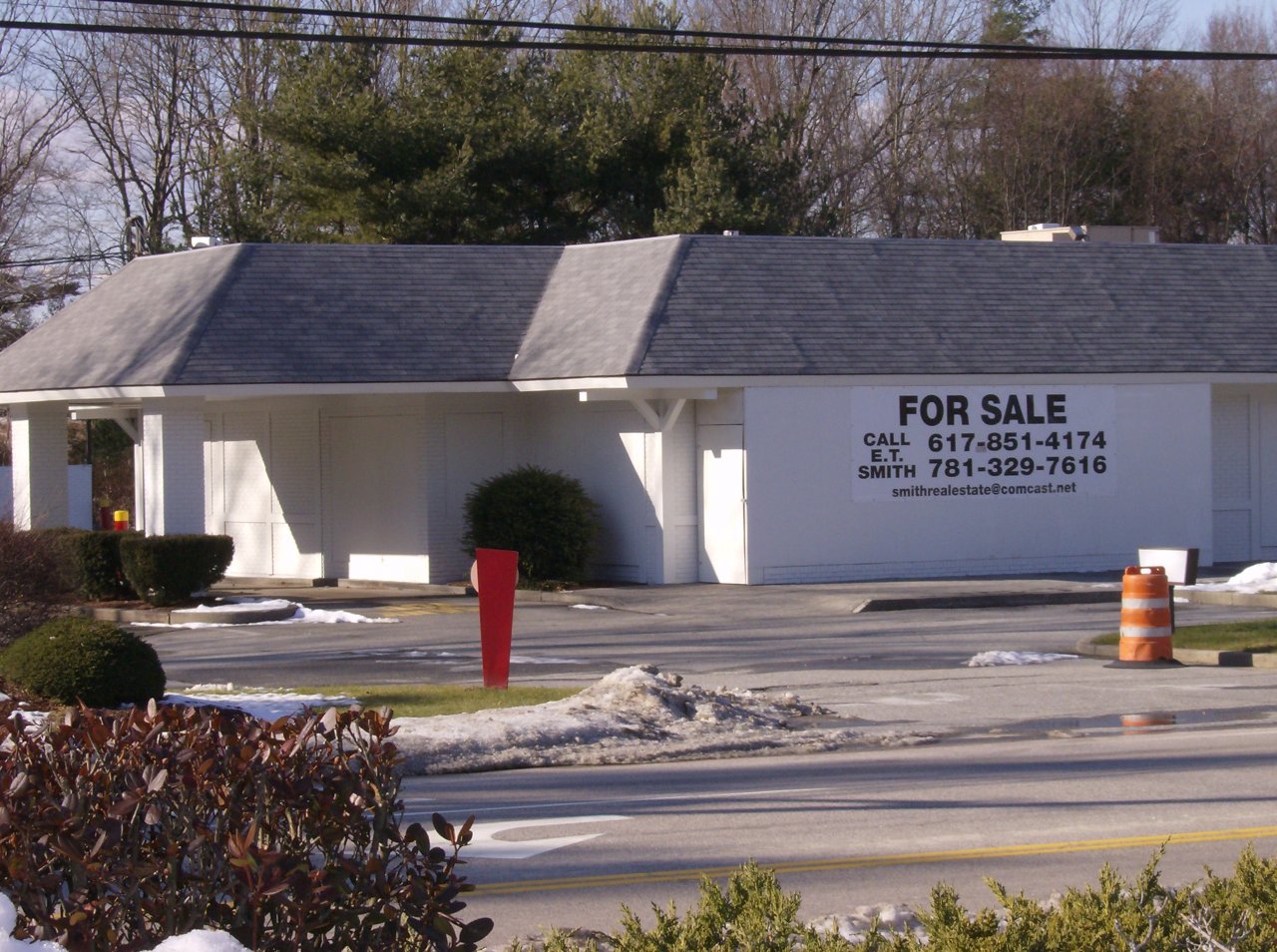 Above: Okay - this is rare. Very rare. Try and guess what the above building used to be.

It was a McDonald's restaurant. They moved into Killingly Commons and built a new place there.

The reason this is rare to see is because McDonald's restaurants almost never close doors on any restaurant they have unless they have a darned good reason to. In this case it was to be closer to other more profitable businesses.

True to McDonald's corporate nature, when they decide to close a store they remove every single trace of identity - which includes boarding up all the windows, removing the roof trim, all signage (even on the doors) and painting the building white. These guys absolutely do not mess around when it comes to removing a presence.

No other fast food business puts this much effort into making sure absolutely nobody can recognize a former McDonald's.

Killingly's retail has changed quite a bit since I left back in 2006. In addition to the construction of new shops, a new high school is being built (if not already finished) as well as conversions of older buildings to offices and new buildings for condos.

Here's what I have to say about each of those:

It was only a matter of time before Big Corporate came in and started setting up shop. All they needed was the land, and someone or some organization was finally able to develop the old Anchor Glass Container property. Said honestly, this should have been done years ago as it was directly next to the interstate, had nothing on the property worth saving (when I say it was a big clay pit I wasn't kidding) and served as nothing more than an eyesore for years. Why it took so frickin' long to happen is a mystery, but better late than never I suppose.

That whole fracas started with the original building. It was designed in such a way where floors could be added to accommodate more students. But of course that didn't happen and instead a building was made to hold a few thousand students with absolutely no chance of expansion. In other words, a lot of corners were cut.

In the last few years I was there, every year the residents voted down the construction of a new high school because the nobody could afford it - including the taxpayers. But someone finally got it thru.

One thing is for sure - that building or set of buildings better be done right the first time. If it's done anywhere near the botch-ups that the other school buildings suffered from, this new one is doomed from the start.

Some of the old mills that have been derelict for decades are finally getting a new lease (literally) on life by being converted into office space.

The two largest problems with old mills have always been safety and environmental. The safety bit is easy enough to understand. Old buildings, old wiring, neglect, etc. The environmental bit only concerns who pays for the clean-up costs. What I mean by that usually whomever buys an old mill is usually responsible for whatever environmental problems are there already. For example, if the building is clogging up a nearby river with crap, that has to be attended to.

Something tells me there have been ways found around the cleanup requirements and that's why there's been a sudden interest in converting those old mills.

New Englanders are typically very anti-rent/lease. It is tradition to own everything. The land, the house, the car, all of it. To put condos in an area like that is a fool's errand.

However there are those who are insistent that condos can work in Windham County.

If the property taxes continue to skyrocket, nobody will be able to afford houses anymore and be forced to rent.

There's an old saying that you can never go home again.

I have no intention of living at the stomping grounds ever again.

With all the changes that have been going on in those parts, my intention of never living there again is cemented even further.