I'm not a wristwatch person. In fact, I find them annoying to wear; this is mainly because most watches are heavy, cumbersome and the designs look stupid. But that may change soon.

Early 1980s Casio watch designs were frickin' awesome, and wouldn't you know it, Casio still makes two very classic models - both of which are under $20. 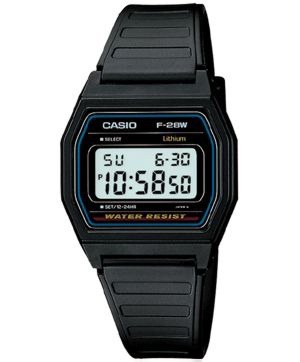 I swear I owned at least two of these as a kid. It is the most basic digital watch you could possibly own. When I say basic, I mean basic. No alarm. No nightlight. No chronograph. No ability to beep - for anything. What you see on the face above is all you get. That's it - and that's awesome. 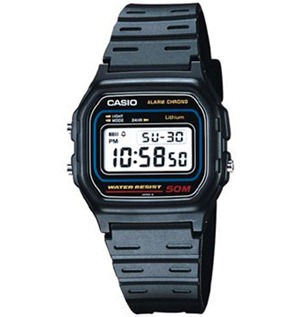 This one has more features. Compared to the F-28W, it does have a nightlight, alarm, chronograph and hourly beep that you can have on or off. The resin band also has that tank-track look to it.

In comparison to the modern...

There is one newer-design Casio made that I dig because.. well, just look: 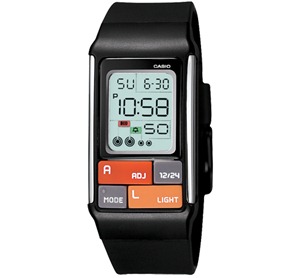 This watch is pretty much guaranteed to be a conversation-starter wherever you go. It's also nice the LDF50 is only 30 bucks.

The style doesn't come without two drawbacks though. The first is that it only has a 3-year battery while the two above it have 7-year, and the second is that it weighs 25g while the above two both weigh only 14g.

Weight for me is the deal-breaker concerning the LDF50. I like wristwatches that are feather-light. The older-style models accomplish that easily while the LDF50 doesn't.

An interesting factoid is that most watches are at least 30 grams in weight, so you can imagine how light a 14g wristwatch really feels. When you type on a computer keyboard as often I do, lighter is always better.

The Casio WV58A-1AV for example is nice modern digital watch - but it weighs 48g, more than three times the weight of the F-28W or the W59.