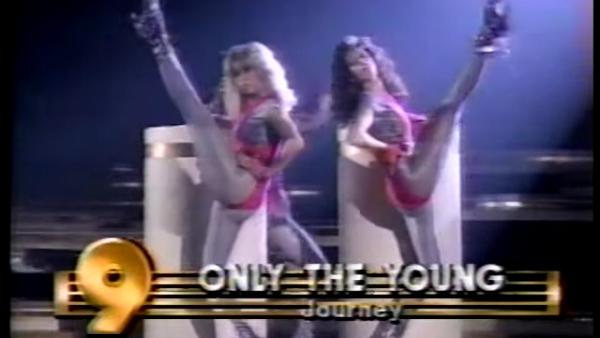 I ran across a YouTube video concerning the oft-forgotten show of the 80s, Solid Gold, so I figured I'd say a few words about it.

Solid Gold was a television show that ran for eight years from 1980 to 1988. And yes, I watched it. Anybody who's in my generation has watched that show at least a handful of times. Maybe not as much as Star Search (which I know everybody watched), but it was there in the fray.

What was the reason to watch Solid Gold? The dancers, of course. The girl dancers sometimes wore outfits that were so skimpy that I'm surprised it made it to television. On one particular episode they decided to wear fringe-style skirts with "nude" colored underwear. It made me do a double-take as a kid. "HOLY CRAP THEY'RE NOT WEARING UNDERWEAR!" Obviously that wasn't true, but wow it sure looked like it. If I had a photo of it I'd show you. Remember, this was the 80s. No internet. This was as hot as it got.

Here's a video of the Solid Gold Dancers in action:

The above is right around the time I started watching the show in the mid-80s. I was ten years old then.

If you're in my generation, here's something that will make you feel old: Every single person seen in the above video is now either in their late 40s or early 50s. How time flies.

The only thing besides the dancers on the show were the performing acts. Everything was lip synched, of course. And sometimes the artist would perform with the dancers, even if only in a limited way.

Here's an example of an artist with the dancers (mostly):

And now, here's one that will blow you away. KISS on Solid Gold. Yes, that KISS.

KISS is so out of place on this show it's not even funny, but yet there they are on Solid Gold.. promoting their worst-selling record of all time Music from "The Elder".

Oh, and a bit of irony. Elder never went gold, yet KISS is performing on Solid Gold.

Where did the Solid Gold countdown list come from?

Where did this countdown come from? Radio & Records magazine and NOT Billboard. Did this mean the list was accurate? Not in the slightest. It accounted for airplay and not actual record sales.

Just about. The video above shows all you need to know concerning that. Some of the dance routines were nothing but stripteases except the clothes stayed on.

Of course, this was the reason why you watched the show to begin with. 🙂

Why were some of the outfits so unbelievably tacky?

Solid Gold started in 1980. During that time there was still a lot of 1970s style floating around and that carried all the way up until around 1984. And then of course there was the 80s that was tacky-extreme. But that was the style then.

In the earlier episodes of the show you will see a disco ball. Watch for it.

What was the point of Solid Gold when there was MTV?

MTV first went on-air in August 1981 roughly one year after Solid Gold debuted. Did everybody run out and get cable TV so they could watch MTV? No. In fact, most people didn't bother to get cable television until the very-late 80s, and it wasn't until well into the 90s that just about everybody had it.

Do I miss Solid Gold?

Nope. The show was just a neat little quirk of that which is the 80s that most people forgot about. And to be honest it is a very forgettable show. You've seen one episode, you've seen them all.