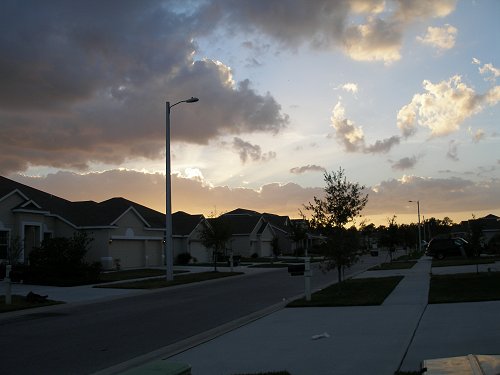 Above: One of the big reasons I moved to Florida. Today is November 30th. The photo above was taken around 5pm or so. It's 6:45pm as I write this, and it's 78° F and awesome as usual.

While driving to Riverview today I had yet another one of those surreal moments.

Yeah. It's one day away from December and the weather outside is just unbelievably perfect. And when I say unbelievable, I mean unbelievable. Calm, peaceful weather. Warm and inviting.

Now granted, back up North the weather is actually doing very well (right now) for this time of year. It's in the mid-50's right now which, to be honest, people jump for joy when it's not freezing outside - especially in November.

But (and there's always a but), there's a high wind warning for the region. So as "nice" as the temp is there right now, it's more or less ruined by high winds that put debris all over the road and just screw up your day. Bleah. And as I've noted here before, cold November rain sucks. There is absolutely nothing good about it.

The best word I know to describe how I feel when encountering ultra-pleasant weather like this in Florida is surreal, i.e. "dream-like". I lived in New England for thirty frickin' years. And I was totally used to getting bitter and outright upset right after October. It got to a point where I planned on being a weather-whiner. And yeah, it was that bad. I was not a nice guy to be around from November to February. But now it's like.. wow. This is for real? Seriously? No way. No frickin' way. And yet it is.

This makes for a very happy Richard. 🙂

the taste is gonna move ya

I personally think this is hilarious and at the same time awesome.

the true definition of "curbside delivery"

Perk of owning a 4x4 truck: When a curb gets in your way, run over it.

It's a quarter after seven in the morning and I just came back from Dunkin' Donuts. One of their delivery trucks (why it was there at this time of the day I have no idea) was blocking an entrance, so I had to swing around the building and use the other one.

After I got my coffee, I examined the curb next to the entrance that was blocked. Didn't look too high.

Yep. This is do-able.

So I ran over it. I'm sure that several other people looked in shock as my truck bounced up and over the curb. Front wheels, whuh-FUM! Back wheels, whum-FUM! Over the median, then comes the landing on the other side, BOOM! and BOOM! Done deal. Out I went.

Was this illegal? Probably. But I don't care.

I have enjoyed the ground clearance of trucks ever since I started owning them years ago.

I remember the first time I ran over a curb. It was with my '94 S-10 Blazer at the Xtra Mart in Putnam Connecticut (the one on School Street for those who live around there). That place has one of the worst designed parking lots. It's tight, cramped and just, well.. awful. I parked next to the store, went in, got my stuff, went out. All of a sudden there's cars everywhere in this tiny lot with no way out. I look at my dad, he looks at me. I said Think I can make that curb? He says Yeah, I think so.

Turned out it worked so well that the guy behind me did the exact same thing in his truck.

Since then I run over curbs wherever it suits me, but only if I absolutely have to.

What's funny to me is that all these people who drive the big SUV's and pickup trucks never realize they can do this.

And yes I always get a chuckle whenever I see anyone staring in horror as I, oh, I dunno, use a truck how it's meant to be used. 🙂