After using Windows 7 on the Dell mini 10v for a few days, this is my verdict:

There is no way I'm going back to XP. Not a chance. I will happily spend the $119 for Win 7 Home Premium Upgrade to keep 7 on this lil' laptop.

I was seriously considering buying another netbook in a few months with the 11.6-inch screen and 1366 resolution because 1024x576 simply wasn't enough.

But this only applies to XP.

The way XP hides the taskbar is seriously clunky and screws with apps when it comes to screen redraws. Win 7 on the other hand has a taskbar-hide feature that's smooth as silk. It is a a night-and-day difference. At least to me it is.

Because of this, now I don't need the extra vertical resolution.

Your only option with XP is to use the Classic theme to get smaller buttons in window frames. And that looks like you're using a 10-year-old computer. Add to that the taskbar auto-hide feature is wonky and it makes for a miserable computing experience. Screw that.

Win XP has always had this weird thing going on where some apps blink. Either the app itself will blink or it will make the whole screen do it. This is because it's not drawing/redrawing correctly. XP has always done this and it irritates the crap out of me.

And God forbid if you have an app that fades in or out, because XP will find a way to screw that up too.

An extra hour of battery life!

This alone is worth buying Win 7 Upgrade for right here.

Win 7 has extra power profile options where you can customize everything a particular profile does, for both hardware and software. It's absolutely 100% frickin' awesome. With XP you only have an "all or nothing" approach, and it sucks.

And even better, you can switch profiles at whim with two clicks: 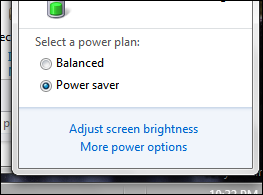 Seriously, how cool is that? Just click the battery icon in the tray, hit a radio button and it's instantly applied.

In the long run, this means you will get more life out of your battery - and that saves cold hard cash. I seriously like that because laptop batteries are frickin' expensive.

Even in RC state, Win 7 is way more stable than XP ever was. I'm not talking about blue-screening of any of that junk. What I'm getting at is that apps that don't play nice with XP (and there are a bunch of those) have no problems in 7 whatsoever.

I have noticed in several respects that 7 is faster than XP on this netbook. In particular, hibernation is WAY faster going in or coming out. Detection of wireless networks is faster. In fact, all the stuff that matters on a laptop is faster overall.

As far as apps go, yeah, they run the same speed launching, shutting down or using. But it's the other laptop-specific stuff that matters more.

This is the most important reason on the list. With XP, this netbook was a toy. With 7, I can do actual work on it in a way that's comfortable. I can type up my documents and blog with ease with Win 7. I now have the screen real estate I want, all of the wonky blink issues are gone, the battery now lasts longer and everything is just better. I can use this now and do so routinely.

As I said above, no way will I go back to XP. This netbook is going to stay on 7. I'll ride out the RC evaluation period then pony up the $119 when the time comes.

The last time I went to Fort De Soto Beach which was about a week or so ago, I was finally able to locate the spot I went to a few years ago. The girl that I originally went there with traded a few emails with me and we confirmed that yes, it was De Soto but didn't know exactly where we went because the place is pretty big. But it was the best lead I had and certainly better than nothing other than "somewhere in St. Petersburg" which is, well.. not very helpful. 🙂 (And yes I know De Soto is in Tierra Verde.. work with me here..)

So I combed the map on Google Earth looking for that spot, and marked two places where I thought it might be at De Soto. After that, I punched in the coordinates in my GPS and off I went because I was really determined to find this spot. If I didn't find it, oh well, but I had to try.

The first place I marked was wrong.

But the second was spot-on correct. I knew I found it from the moment I pulled into the parking lot.

The exact spot (at least for where to park) is here. 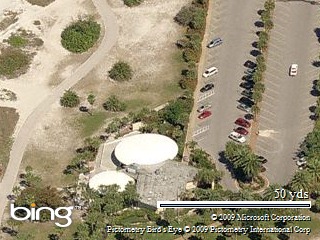 From there it's short walk out to the beach and there you are.

Were you to go there you wouldn't consider it anything special because it's more or less like any other part of the park. But it's special to me because it was one of the first really cool experiences I had in the Sunshine State. Not knowing where this place was had been driving me bonkers for years.. it seriously irritated the crap out of me.

What happened originally is that when we went there, I thought, "I should really mark this in my GPS." I didn't. And I've been kicking myself in the ass ever since. But not anymore because this time, oh yes, I did mark it. 🙂

So I finally found a way to install Windows 7 on my Dell Inspiron mini 10v using a USB stick alone without the need for an optical drive. It was scary at first because I didn't know if it was actually going to work or not.

Windows 7 works better than I could have possibly imagined. The installation went thru flawlessly. Driver updates worked. Nothing broke. I am shocked at how well this runs on a 1.6GHz CPU with only 1GB of RAM. It even supports the Aero interface.

In addition to that, my battery now lasts longer because I have better power management features, the sound is clearer and crisper (don't ask me how that happened but it did), the display has more options in concert with the Intel GMA program and well, the whole computer just runs better.

I am completely XP-less at this point. The only XP I have now is in a virtual session on my big box PC. And to be honest I don't even need it.

I was concerned that this netbook wouldn't be "enough computer" to run 7. Boy, was I wrong. This thing runs it just fine with its provided hardware. I don't need to upgrade a thing.

If that weren't good enough, I also now have more usable screen space because of the way Win 7 has its menus laid out for applications.

I like this so much that yes, I'm probably going to buy another license of Windows 7 upgrade just for this netbook. It runs that good.

Windows 7 just continue to blow me away with what it can do. This is nothing short of incredible.

Proof I'm using it on the netbook: 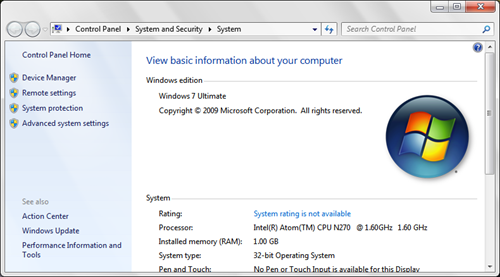