I'm not getting the LDF50 watch. I received this email today from the seller:

I apologize-it appears I made a mistake on the inventory of this watch and do not have any at this time. I did try to procure from am alternate source- but zero was available.

He offered a full refund, which I accepted.

I decided to return the W59 because it really irked me that the display doesn't show the month and day but rather just weekday and day. I did however keep the F-28W; it turns out the band just needed a little breaking in to become more comfortable and now it doesn't bother me at all. 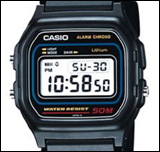 The F-28W is on the left, the W59 on the right. Notice how the W59 does not show the month at top right of its display. I find that really annoying. If I'm doing something as simple as writing out a deposit slip at the bank, the W59 doesn't give me the info I need to write out the correct date on the slip. The whole point to showing the date on a wristwatch is for fast, instant and complete info and the W59 just doesn't do that.

And yes I do have a legitimately difficult time remembering a month's number. I'll remember "April", but not the fact April is month #4 of the year.

I also changed my mind about the LDF50 and decided to buy it. The MSRP was $30 but I was able to score it on eBay for significantly less than that - even with shipping included.

Even though the watch is 25g in weight, there were two things that convinced me to go for it.

First is that the band is wide, and that should make the weight of it much more comfortable.

Second is the fact I could find this watch absolutely nowhere locally. Stores where you would ordinarily buy wristwatches simply do not have this particular model. There are only a handful of these on eBay. This either means the LDF50 is selling very well, or it's a limited run from Casio. I'm pretty sure it's the latter. The LDF50 could be a collectible - but that's not the reason I bought it.

I purchased this watch because the likelihood of anyone else having it, much less wearing it, is very slim. I seriously dig the fact the LDF50 isn't easily found, so even if someone wanted it, they couldn't just run into the nearest K-Mart and pick one up. Having uniqueness like that in a timepiece - especially an inexpensive one - is pretty darned cool.

I don't have my LDF50 just yet as it has to be shipped out. Hopefully I'll receive it before the end of the week.

One final note: There's some debate on whether the LDF50 is a men's or a women's watch. It's neither. Technically it's a unisex watch. Casio has no literature stating it's specifically for men or women - and in promo photos you see for this timepiece, both men and women are wearing them. The only thing that makes any LDF50 distinctively "men's" or "women's" is the band/case color. The LDF50-1 (what I bought), LDF50-4 and LDF50-7 can be men's or women's. The LDF51-4A and LDF51-7C on the other hand, while the same watch, are decidedly 'girly', but only because of color.

Casio does typically trip over lines between what's considered men's or women's watches. If you look at the MTP1165A series for example, the instant reaction is "Women's watch!" Nope. Men's watch - but certainly doesn't look like one.

I decided to see if I could actually find and buy a few of those old-school Casio watches new. 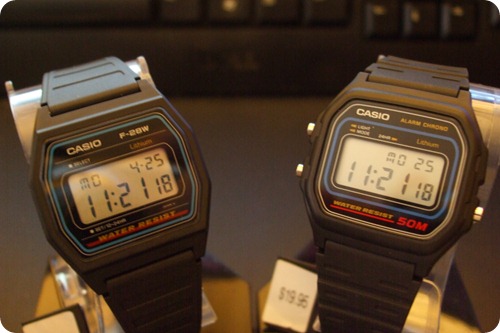 Cost for both after tax: Under $30. Cheap enough, so I bought both.

Two things bother me however. The F-28W's band is a bit stiff, and the W59 even though it has more features does not display the month - even though you can set the month. Yeah, weird.

I have thought about swapping out the band from the W59 to the F-28W as it really wouldn't be that difficult and I know it would fit, but I'd like to keep these all-original.

Right now I'm wearing the W59 because the band is more comfortable. I don't know if I'll be wearing it with any sort of frequency because as I said in my last bloggo, I'm not a wristwatch person. If I decide to not wear either, they're still cool little conversation pieces I can use as knickknacks. 🙂