i3 coming back to me 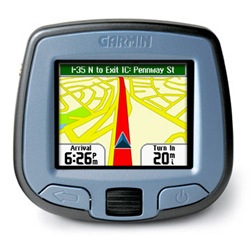 Recently I sold my Garmin StreetPilot c340 being that I didn't need it anymore. But then a bit a paranoia set in to the tune of "If my c580 ever fails and I'm somewhere where I have no clue where I am, I'm screwed."

Said honestly I wouldn't be screwed, per sé. I could eventually find my way home but I'd waste a lot of gas in the process. So I called up my sister (who is currently in possession of the i3) and asked if she could mail it back to me, so she is.

I find it necessary to have a backup because I wholly admit I’m hooked on GPS. Yes, I can drive without one (did that for years) but once you drive with it, being without just sucks. 🙂

Originally I bought the i3 way back in 2005. It still works. The USB port is a little bit wonky now (you have to jiggle it somewhat to get it to connect proper), but the fact it still works almost 4 years later is amazing.

The cool part about the i3 is that it only needs 2 plain ol' AA batteries to operate. With "Normal" mode enabled (WAAS disabled) you get about 4 to 6 hours out of the batteries.

I plan on buying a 2GB Micro-SD card so I can (hopefully) fit the entire USA map data set in it. Granted, it will be older v7 maps but since it's a backup I'm not overly concerned about that. As long as it works and can route me home that's all that matters.

It's also cool that the i3 is small enough where I can just toss it in the glove box and leave it there until I need it.

Yeah I'd probably find the "wheel-and-click" very annoying to use as the i3 doesn't have a touchscreen, but hey it's not costing me anything and if it can still boot up, grab a signal and get me where I need to go, that's fine by me.