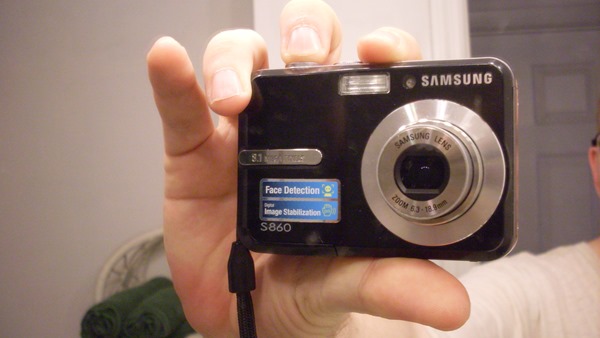 Kodak C195 is gone, and the Samsung S860 has replaced it. I was right that this is the camera I should have bought as my replacement in the first place.

Yeah, there's a story behind this.

The last time I talked about this, the C195 was on its way. It arrived. And it was defective. That ticked me off.

(Note before continuing: If you bought a C195 based on my recommendation and it doesn't have any problems, KEEP IT. Mine in particular just happened to be a dud, so it had to go back. Sometimes that happens with mass-produced electronics, and I just got unlucky with mine.)

What was defective? The speaker. Even on maximum volume, it barely squeaked out a sound. Why does this matter? Because in direct sunlight where the screen washes right out (as does any screen in direct sunlight), and the beeps and other noises a camera makes is all you have to go on to know when something is in focus and when a shot has been taken.

The C195 did in fact take excellent photos. Truly, it did. But I sent it back and did not order a replacement, because I decided that I was done with acquiring a new digital camera for a while, figuring I could mope along with my FujiFilm A820.

But then as fate would have it, the A820 broke. There was a rattling noise that started happening on the inside, so I cracked open the camera and something fell out. I've no idea where the piece went because it was tiny and probably went under a piece of furniture. Well anyway, I put the camera back together and the wheel menu no longer worked. Now the camera is busted.

At this point I actually needed to buy a camera because other than my crappy phone, I had no working camera.

Once again, I tried to buy a Samsung S860, and this time I was successful.

Previously, I tried to buy the S860, but due to a shipping screw-up with eBay, it never got here, so I got a refund.

This time around, I bought it used through Amazon and it arrived like it should have.

Yes, it's used. Yes, it's a bit beat up. But this is the kind of photo I can take with it: 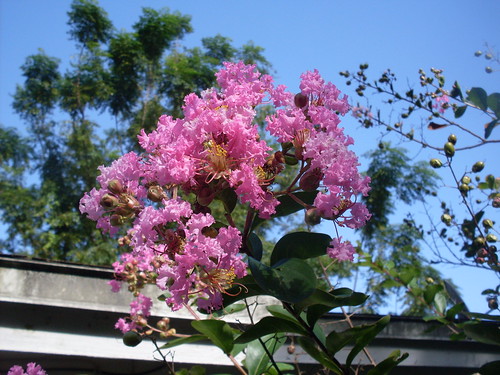 I took that photo with the S860. It's not a perfect photo, obviously, but it is the kind of photo I wanted to get. Now I can do it.

Other than the fact it runs on 2 AA batteries, the big reasons I wanted the S860 were that it has a proper "noise spread" of JPG noise, and the fact it has darned near perfect color representation.

This sounds like a weird thing, but it's easy to understand once you know what to look for.

Every digital camera out there saves photos in JPG image format. The JPG keeps the size of images down by using compression. During compression, things called digital artifacts appear in the image where you'll see little flecks here and there. That's digital noise.

In the way a digital camera renders images, the noise is either spread uniformly or it gets blotchy. Most cameras do an awful job at noise spread where you can plainly see the artifacts - and yes, this even happens on expensive digital cameras.

The S860 has an almost perfect noise spread.

I saw this uniform spread back when I was researching photos on Flickr that people took with the S860. With other cameras, the spread was blotchy and artifacts were clearly visible. With the S860, the spread makes photos look like film. Now you know why I wanted to get one.

It has been a very long time since I've had a camera that truly gets colors right, and the S860 absolutely nails it. The only digital camera I had prior to the S860 that did colors that well was an Olympus SP-320, which I unfortunately destroyed (totally my fault).

Why didn't I just get another Olympus SP-320? Because it's only 7.1MP and has very poor battery life, mainly due to the fact it has a 3-inch screen. The one feature I miss from that camera is that you could move the focus window anywhere you wanted on-screen using the directional buttons. What a cool feature that was. And it actually has a real-deal viewfinder too. Great camera and super-easy but super-powerful menu options.

While the Kodak C195 totally did get colors right with a few minor changes in color settings, the S860's way of representing color is absolutely what I was looking for.

I know now why people didn't like the S860

It puzzled me why people didn't buy this camera in droves back when it was new, considering how good it takes pictures. But then as I experimented with it, I realized why some people hated it. 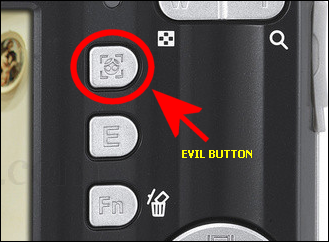 If Face Detection is on, every photo will be blurry. When I first got the camera, I knew this, but didn't know exactly how bad it was until I turned it OFF...

...and it isn't made obvious how to turn it off. It's not that the feature is buried as there is a dedicated button for it. But it's a non-standard button with a symbol that nobody would recognize ordinarily. The on-screen symbol is equally as confusing if you didn't know what to look for.

See, the problem is that the S860 is designed out-of-the-box on the assumption you're going to take photos of nothing but people. If that's the only kind of photo you take, then sure, Face Detection is wonderful. But of course, people take more than just photos of people.

Once I turned FD off, the camera finally started acting properly because now it wasn't "hunting" for a face and instead focused on whatever I pointed the lens towards.

Some stuff in the menus is a bit annoying. For example, setting the clock. When you get to the clock screen, it is not made obvious that you have to press right and then down to actually set the clock on the thing.

The manual I downloaded for the camera did not help me. I had to figure out how to set the clock on my own.

Other things are buried in submenus, but fortunately once you get the thing set up right, things get a lot easier.

"Program Mode" is the best thing on the S860

Once I got used to the wonky menus and such, I found that the best thing to do with this camera is to set the wheel to "P" for Program Mode, adjust your settings (I always keep the flash off), and that's that. On boot of the camera, it remembers the last settings you used, which is exactly what I wanted.

What this means is that when I want to take a photo, I just turn on the camera and go. The only thing I have to do is press down on the disc button if I want a macro shot, and that's fine.

Fortunately, I do not have to mess with ISO and white balance, as I found that I can trust the S860 to pick the proper settings. If the camera is in Program Mode, things work out just fine as long as the Face Detection and flash is OFF.

I bounced around with a Kodak C195, but in the way things turned out, the Kodak was defective, my old FujiFilm busted, and that was just the way of the gods telling me, "Go buy that frickin' Samsung and just be done with it already", so $35.27 later (shipping included), I did.