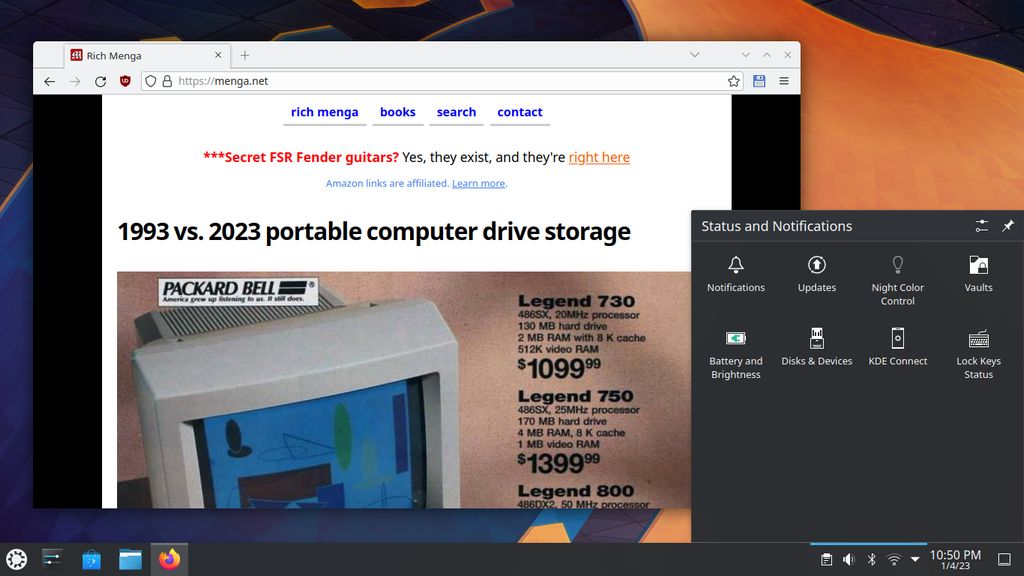 That date may sound like the distant future, but it's really not. In my experience, a Windows OS gets really long in the tooth about 1 year before Microsoft officially stops supporting it. Why? Because that's usually the time both hardware and software makers start pulling away from the OS. In reality, the time to get rid of Windows 10 is Oct 14, 2024 which is just under 650 days away.

My Win10 Pro runs fine, but to this day I really miss Windows 7, which I consider to be the best Windows ever made. I did try to go back to Win7 but couldn't because of software compatibility crap.

In '22 I tried switching over to Linux. Manjaro, specifically. It was good but not quite good enough for my needs.

For '23 (and I suppose this is a New Year's Resolution?), I'm going to try to switch to Linux again, and this time I'm testing out Kubuntu 22.04 LTS (Long Term Support), which has a lifecycle going all the way to 2027. Generally speaking, it's always better to use an LTS installation where Ubuntu/Kubuntu/Xubuntu is concerned.

I'm at a point in my desktop computing life where I only need Windows for one very specific thing (GPS mapping stuff) and the rest I can do all in Linux. I wasn't at that point when I tried Manjaro, but I am now with Kubuntu.

How is Kubuntu? Really, really fast. Lighting fast startup and shutdown, and the Plasma desktop makes me feel like I have a brand new computer even though the hardware hasn't changed - and that's on over-10-year-old second laptop I'm using for testing using an old Crucial 256GB SSD I bought years ago.

It is truly amazing how much the desktop experience has improved with Linux over the years, and wow does Kubuntu nail it. It looks and feels modern without being intimidating to use. In fact, it's not intimidating at all.

All the power user stuff is still there because it's Linux, but the presentation you get is top drawer stuff. I like it.

I don't know if I'll switch over because I just started testing it out, but it's looking really good so far.

If I do decide to switch over, I will still keep an SSD with a Win10 installation for when I need specific GPS map stuff. This stuff I'm talking about only works in Windows, can't run in WINE and can't run properly in VirtualBox either. Believe me, I tried, and it's just not happening.

It is a bit stupid dedicating an entire SSD just for one OS to do one very specific thing, but that's a situation I may have to deal with. Fortunately, that one specific thing is only something I need to do about once a month. It's still annoying I have to swap out an SSD to do that one thing, but not the end of the world.

And yeah, I did try to get Win10 running off a USB stick to do that one thing. Doable? Yes. Stable? Nope, and not recommended. I destroyed a 128GB USB stick attempting to clone Win10 to it, making it unusable to the point I had to chuck it in the trash.

Again, I'm impressed with Kubuntu, and hopefully will be able to switch over to it after I test it out a bit.