A lil' old school gaming will do you good 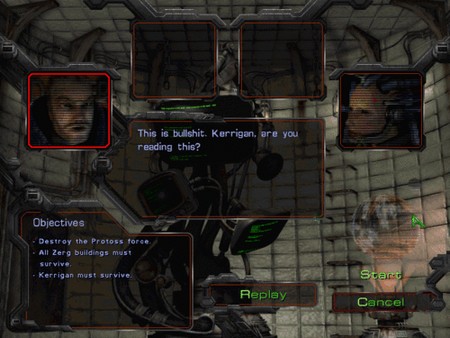 I was digging around my old game CD's looking for some gaming entertainment (since I'm all Diablo'd out) and found StarCraft. Cool! Only problem was that I couldn't find my Brood War Expansion disc. Bummer. So I had to head out and buy another "Battle Chest" version of StarCraft which includes the Brood War Expansion CD. It's only twenty bucks so it's not like I went to the poorhouse or anything.

SC is just a cool game. It was done right the first time. In addition, it runs very well on my laptop. So what if it's only 640x480? It doesn't need any more than that.

This is a game that definitely has repeat playability and it's no wonder it sold so well (and continues to). The characters are awesome, the storyline is awesome and gameplay is EASY yet challenging.

This is also the first game I played where there is actual cussing in it from time to time. See image above.

I only play SC in single player mode. I tried playing on Battle.net once and got bombarded with "n00b" about ten trillion times.. so I don't do that. As if I need ten year old kids calling me names just because OMG WTF he doesn't know [this] [this] [that]??!?! F49!!. No thanks. 😉