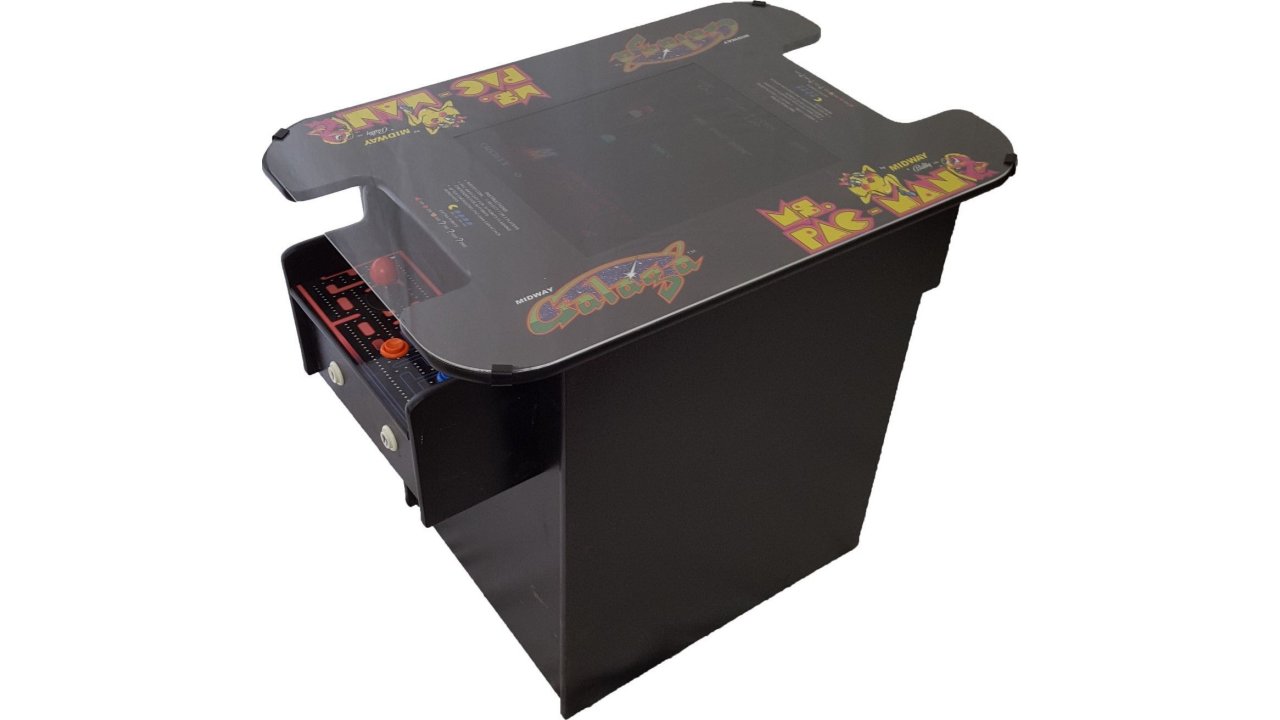 Arcade video game machines were a thing at one point, and now they're all but extinct. There's a reason they were killed, and it's probably not what you think it is.

To begin, if you like arcade games and want one of your own, the only one worth buying is the cocktail table machine seen above. That machine comes with 60 games. All the classics. Ms Pac-Man, Galaga, Frogger, Donkey Kong, Galaxian, Dig Dug, Mr. Do, Space Invaders, Burger Time, Centipede, Gun Smoke, etc. They're all there.

There are 3 main reasons why that machine is the best to buy. First, it's new and has a 2-year warranty. Second, it only weighs 60 pounds (very light compared to a full cabinet and easy to move around.) Third, and most important, it's a table, meaning it can be used as actual functional furniture. In addition, it makes the vintage gaming experience much more enjoyable. Have a seat, put a drink on top of it, play and enjoy. Kids would also have fun playing this machine, and of course, cocktail table is the best for 2-player.

One more thing. The price for the machine is a steal compared to an actual real vintage arcade machine. Remember, it's new. No restoration required. No ancient half-working electronics.

Anyway, on to my thoughts on why video arcade games were killed.

On this Black Friday 2017, the hot sellers are of course video game consoles. Nintendo Switch, Xbox One X and Sony PlayStation Pro are the big deals of the moment.

What are the hot video game titles? Pretty much anything Mario, Star Wars or LEGO. Yeah, it's basically the same stuff you saw 10 years ago just with new titles.

At the time I write this, arcade machines aren't dying. They are absolutely dead and have been dead for years. It used to be that you'd find at least one video arcade machine or pinball machine in every department store and diner in town. It also used to be that every mall in America had a dedicated video arcade room, usually also with pinball machines. All those are gone.

The heyday for video arcade machines was the early '80s. Being I was born in 1975, I only got to see the tail end of arcade machine popularity in the late '80s and early '90s. And I did get to experience some fairly large arcades. Riverside amusement park (now known as Six Flags New England) had a monster sized arcade with somewhere in the neighborhood of 50 or more machines. And that is not an exaggeration. Rows and rows and rows of them in one huge room. When I went to Disney World as a kid, they also had a rather large arcade section.

As a kid, I also got to experience the "perfect arcade room" a few times, which was a dimly lit room of about 20 to 30 machines that had galaxy carpeting everywhere. Weird but cool experience. Dark room, a haze of smoke in the air (everyone smoked cigarettes back then,) flashing marquees and screens everywhere and a bunch of different noises from the machines all going off all at once in combination with people talking at the same time.

A lot of people blame home consoles such as the Nintendo Entertainment System and Sega Genesis for the decline of arcades.

That wasn't the reason.

Given that most businesses knew absolutely nothing about arcade machine maintenance and wouldn't spend a penny on them for repairs since they were leased, once one fell into disrepair, it stayed that way.

It was very common to find machines with screen burn-in, loose joysticks, bad buttons, bad steering wheels and gear shift levers that didn't work right, coin boxes with bad springs that didn't register when a quarter was inserted, and so on.

Nobody ever mentions the fighting but this was a real thing.

I never got into a fight over a video arcade machine, but there were plenty of others that did. Kids would fight over the dumbest things with video games. It happened with adults too sometimes.

Fights happened often enough to where some arcades would actually employ a bouncer just to keep people in check. If you saw a musclehead big dude in a black t-shirt standing in the corner not playing games but just watching everywhere, that was the bouncer. And you knew right then and there that the room wasn't a good place to be and to get the hell out of there.

This is the main reason people stopped playing arcade machines.

People could deal with half-working machines and the occasional fight that broke out. But when the price-per-play started going up, that's when players said "screw this."

For a long time, the price per play was 25 cents. But then there were machines that appeared where it was 50 cents a play. Double the price. And it just wasn't worth it. No matter how fancy the game, 50 cents for 5 minutes or less of play was just too much.

It was very common to see those high-priced machines in pristine condition. Why? Easy answer. Nobody played them...

...and that's what killed video game arcades. Instead of getting 20 minutes of play from a dollar, now that only lasted a few minutes. Total ripoff.

Where console gaming is concerned, yes it is. When greed happens and the price gets too high, people stop buying.

The majority of new console games no matter what the console is are all overpriced. Super Mario Odyssey for example is almost 60 bucks. That turns a lot of people off, myself included.

Where smartphone and tablet gaming is concerned, no it isn't.

Apps for phones and tablets are either free or sell for cheap. Whether iPhone, iPad or Android, there's tons of games out there.

Are they as advanced as console games? Not in the slightest. But the price is right, and that's why people play them more.

...don't bother with the arcade machines other than the one listed at top. Seriously, don't. I owned a full size JAMMA style cabinet at one point. It was big, stupid, clunky, ate electricity for breakfast, it's just... no. Don't do it.

The better option is to use something like this: 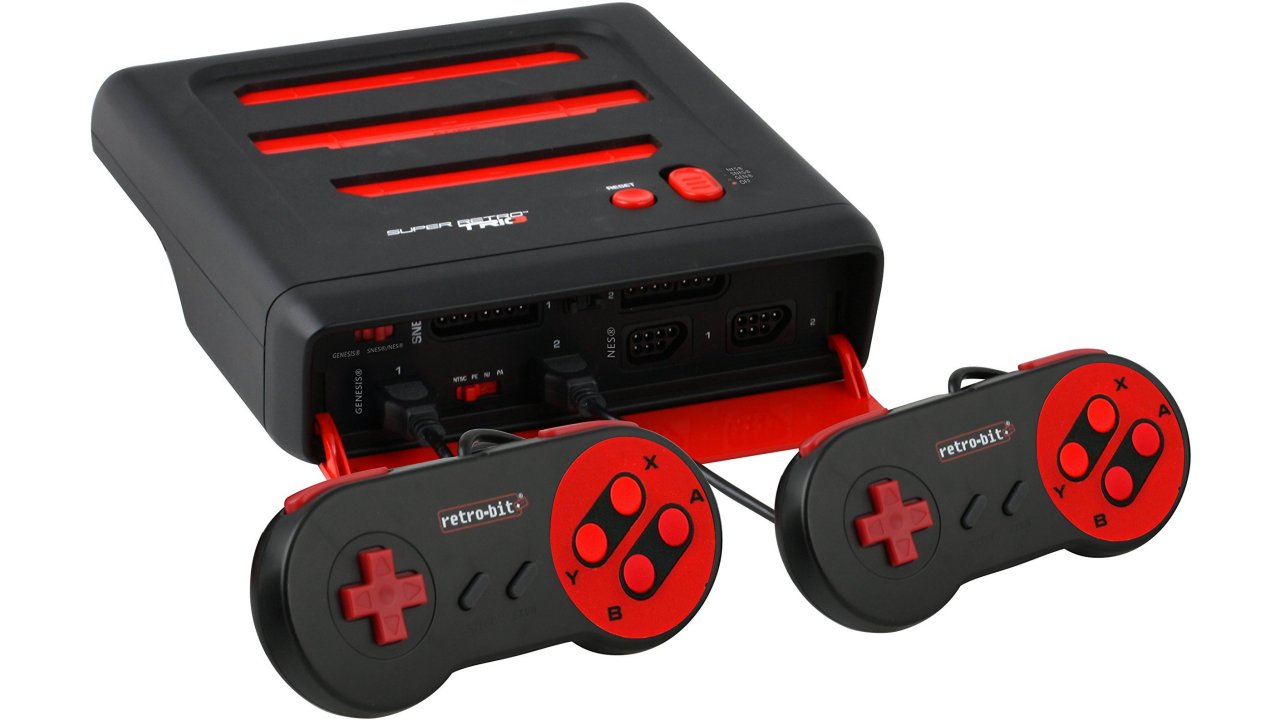 The system shown above plays Nintendo, Super Nintendo and Genesis games. Plug in and go.

"But I don't have the cartridges", you may say. No problem. Buy a multi-cart. The one linked has 143 games on it. Good ones, mind you.

"But I want to play arcade games", you may say. Get a retro video game console. Takes more effort to set up, but it supports MAME (if you know arcade games, you know what that is,) meaning it supports a ton of arcade game titles.

It really is all about price

With the cocktail table machine at top, that will last a good long while and provide years of enjoyment. No question about it.

With modern new consoles, screw 'em. Not worth the money.

With retro consoles, I'd say just pick something where you can get at least a year of play out of it. You'll be spending $50 to $100 for retro stuff, and if that lasts a year, then yeah, you got your money's worth.