in which i go for something simpler

Title of this entry is influenced by MM's site because he almost always starts off his posts with "in which". For some reason it just doesn't get old. Go figure.

Slight redesign of the site has taken place. It's not all that different from the last one because the layout is more or less the same, with the exception that the archives are now on the bottom instead of on the side.

There are two things to this design that you would not be aware of unless I told you:

1. I am using traditional HTML tables with CSS design attributes.

Previously I was using "pure" CSS, but that was proving to be a pain in the ass, so I went back to using tables. CSS is really great for design, but not so much for structure at times.

2. (This is where the CSS really comes into play.) You can now resize the site in Firefox and IE (edit: read below) easily, and the text will resize along with it in concert.

With FF if you press Ctrl + or Ctrl - you will see it in action. In IE, it's (from the top) View, Text Size and pick a size. (Had to go back to using px font sizes because IE sucks big donkey dick, so text will not resize in IE.)

My execution of this is different from "regular" web sites because I sized everything in CSS using em's instead of px or pt. This is why the "box" sizes up or down along with the text. If you know CSS you know what I'm talking about. If not, well, disregard. 😉

I did this because there are times when I want to bump up the text size easily without screwing everything else up. The images won't resize but that's okay. I could have done CSS image scaling but that would have been a royal pain to accomplish because I would have had to add an extra tag to every single image in every single post. Um, no thanks. 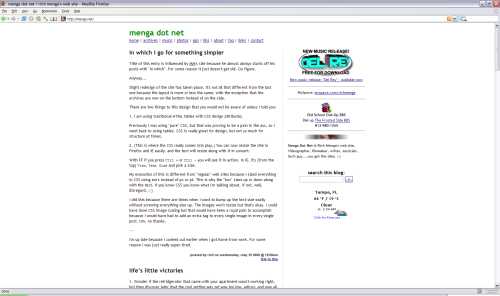 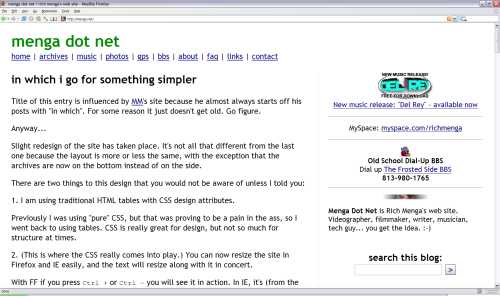 Same resolution, just resized. Because of the CSS em sizing, the look remains the same.

I'm up late because I conked out earlier when I got home from work. For some reason I was just really super-tired.