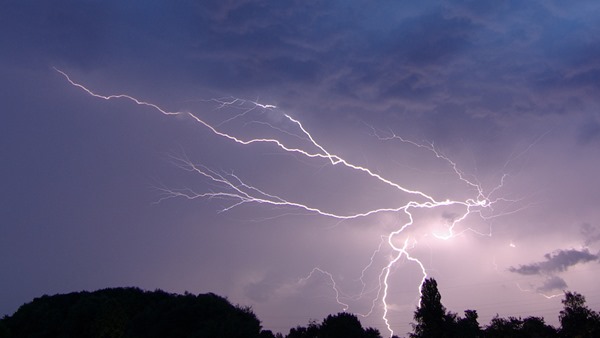 Lightning is a thing in Tampa, Florida. It destroyed a laptop and a router of mine, and I need your help to recover.

Well, yesterday was the second time in my 10 years of living here that I had computer equipment destroyed by lightning.

I'm in the kitchen making some food. The storm is going on outside. I hear a "KRICK-KRICK!" and literally saw two bright arcs of electricity come off the sink. Right after that, the hair on the back of my neck stood up. I am not kidding.

Now if you can't put two and two together, that means lightning struck the house while I was in it. Had I been touching the sink or even just washing my hands from running water in that sink, I would have been dead right there - and that is no joke. I had just been using the sink moments before.

I've never had electricity from lightning happen that close, and it scared the crap out of me.

After the strike, I go to the laptop that I left moments before, and the screen is off. Uh-oh. I knew the laptop's fate before even pressing the power button. It was dead. And yep, it was. Power button didn't work, battery-alone didn't work. The laptop is toast.

The first time I had lightning destroy equipment, it was just the router, which I promptly replaced. This was years ago before I started using a UPS.

However, this time around, there was a UPS there "protecting" my stuff, except it didn't.

You're probably wondering how I'm able to write this since lightning killed my router and laptop. Answer: I'm using my backup router and backup laptop.

My backup router is this crappy little TRENDnet thing I paid 30 bucks for years ago, and I use it only when my tried-and-true Linksys WRT54GL breaks (or in this instance gets fried by lightning.)

My backup laptop is a slow-as-hell Acer Aspire One AO722 with a keyboard that's very annoying to type on.

Anyway, my backup stuff, while annoying and slow to use, does work. And once the replacement equipment comes in, the backup stuff will once again be packed away.

I know that for many people, 330 bucks is nothing. But to me it's a lot. This is an expense I totally did not see coming (who would?), and it really socked me.

With that said, I bring you:

I'm calling this first strike because, y'know, strike, like lightning strike? Get it?

To recover what I spent. $330.33. I'm not asking for thousands or anything like that. I'm also not asking for cash to buy things because said things have already been bought and are being shipped to me.

Why should you send money my way?

If you're a regular reader of this site and have found anything I've written here to be informative, educational, entertaining or all three, that's worth sending a few bucks if for no other reason than the equipment you're helping to recover the cost for is literally what gets content to the site (well, except for the $4 HDMI cable.)

You'll notice I don't buy new computers. I compute cheap because I have to. Yeah, I'd love to run out and buy a new Alieware laptop or a Macbook Pro, but I don't have the cash for that whatsoever. And I didn't exactly have the cash for the low-end stuff I bought either but had to buy it anyway because my livelihood depends on it.

"Okay, you've convinced me. You're worth a few bucks. I'm ready to send money."

Go here to send a few bucks my way:

Send what you can here

I'm just going to outright call this what it is. This is straight up e-begging. I'm trying to recover an unexpected equipment cost that whacked me for 330 bucks. I thought I had adequate protection from the lightning, but, well, I was wrong. When lightning is really intent on ruining your day, it will do it no matter how much protection you have.

Any cash you can send my way is greatly appreciated. Again, if you like the content here, please consider sending some green my way. 🙂

Some nerdy tidbits about the Dell Latitude E6330 and Windows

Some people are into this stuff, so I'll go ahead and talk about it.

In what are now known as traditional laptops (a category you could literally spend hours going through as there are so many of them on that link,) certain Latitude series laptops by Dell are as good as it gets. The Latitude is not a gamer nor casual laptop. It's built for business use.

The Latitude is also one of the few series left - for the moment - that you can find refurbished that comes with Windows 7 Home or Pro. That's some genuinely good, cheap computing right there.

These are all the Dell laptops on Amazon with Win7 on them. Prices range from the high 200s to the mid-700s. My old Dell that got killed by lightning, the E6420 Latitude, seems to have gained in value since I bought mine.

The advantage of using an older Windows OS is that it runs really, really fast with not a lot of hardware grunt.

The E6330 Latitude has an Intel Core i5-3360M CPU which has Intel HD Graphics 4000. The Dell that just got fried by lightning had Intel HD Graphics 3000, and the laptop I had before that (a Lenovo ThinkPad that fell apart on me, never buying one of those again) had the 4000. When I went from 4000 to 3000, I noticed a significant performance difference in the negative direction, especially with Flash-based video. I will be happy to get the 4000 graphics set back.

Win7 runs amazingly well with 4GB of RAM and stupendously well with 8GB. Is any more than 8GB needed? Nope. Just like the maximum RAM Windows XP could use effectively was 2GB, Win7's optimum RAM it can use is 8GB. Anything more than 8GB is a total waste.

Is Windows 7 The Last Great Windows?

The two best Windows ever are Windows 2000 and Windows 7.

I didn't use Win2000 regularly because it was never released as a home edition, but did use it in offices, and can easily say that it was ten times better than XP and always was. Back when I was servicing laptops, any machine that came in with XP on it was slow and a chore to work on. Win2000 on the other hand is a stripped down, no-nonsense Windows that runs circles around XP.

Back when Win7 was in beta and offered as a free download from Microsoft, I gave it a run, and holy crap, it fixed nearly every problem that XP had. And it was faster. Wow. Nice. And it did it with some style and flair. This was the Windows worth waiting for, and I've been using it ever since.

I have never regularly used Windows Vista, Win8, Win8.1 or Win10. I thought about getting 10, but it has issues with older programs. And being there's a few older programs I use, it wasn't worth the risk.

January 2020 is when extended support for Win7 officially ends. Will I use Win7 for that long? If I can, yeah, I will. I'm at the point in my computing life where I am absolutely not interested in what's new or "exciting." What I do care about is computing that allows me to get work done, and Win7 does that job better than any other OS out there.

How long will this "new" Latitude coming in last for?

There's going to be a few changes concerning how I deal with Florida lightning and computers.

Simply put, if I hear thunder in the distance and I know a storm is coming, anything plugged in the laptop gets unplugged, both for cables and for memory cards. I am taking no chances. Having a UPS with surge and spike protection simply isn't enough.

Provided I can stay out of Mother Nature's way, I'm hoping to get 3 to 4 years out of this Dell. If I can run this one right up until Win7 support ends in 2020, that would be acceptable.

And again, if you could, please help me out. Thanks in advance for being awesome. 🙂