80 miles per gallon - at the cost of your neck 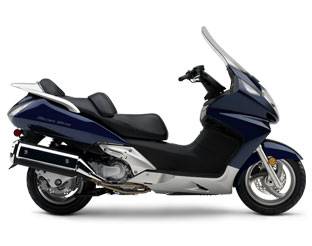 The local news ran a story tonight on Scooters. They showed all these happy people - all women - zipping along in their new scooters, mostly made by Honda (Silver Wing shown). They were all laughing and having a good time.

Granted, while they need only one gallon of gas and get monster mileage, these things are terrible.

First of all, you can't drive them on the highway (Thank God). It's illegal in all states in New England (to the best of my knowledge) to pilot one of these on a highway - even limited access highways.

Secondly, you don't get any respect from anyone driving a scooter. This is the USA. We like big cars and big engines, mileage be damned even with the costs soaring as they are. During the run of the story, the women - women - driving these things said they were getting high fives from other motorcyclists. Bull. I don't believe that for a second.

Third, this vehicle is completely useless when there's snow on the ground or when it's raining.

Fourth, this is a fair-weather-only vehicle. If it's not bright, sunny and dry out, you can't drive it anywhere. And no, don't try driving one of these at night. Bad idea.

Fifth, this is a two-wheeled vehicle. Unless you properly know how to drive one, you can get hurt real bad and/or killed riding one of these. I'd rather keep my crumple zone equipped truck, thank you very much.

Being that I opted for fast internet but not cable television I thought I would have no means of visual entertainment.

Anyway, the point is that I don't have to have cable television. I do have other means of visual entertainment. Cool.

Okay... migration successful. Wow this was a pain in the ass to do. Right now I'm writing just to myself because I haven't given out this site address to hardly anyone yet.

Now then, on to business. All my friends are going to ask "Why did you move your site again?" Good question, here are my answers.

As part of my process of moving to Maine, I made the decision to move this site to avoid certain people who like to keep tabs on me. I'm sure that sooner or later they will eventually find their way here, but, it won't be as easy.

It was a dumb idea to register a domain name using part of my name for the world to see. Some people took it upon themselves to do some really mean crap to me with some personal attacks. I learned my lesson. More on that in a sec.

By having this domain I am allowed to write more freely without being tagged personally. I mean yeah, some people will figure out this site belongs to me, but not as many as before.

I said I had learned my lesson. Yeah, I did. Here's what I've learned.

The internet is full of rude idiots. Common courtesy seems to take a backseat and no one understands proper "netiquette" any longer, nor do they care.

Posts that had personal info in it

Comic strip (had my name in it, I will rename and put it back eventually)

I apologize in advance to friends who enjoyed the other stuff I had here that I had to remove. The fact of the matter is that placing my name on the 'net simply wasn't smart and I paid the price for it. I didn't have the patience to deal with it. Stamina yes, patience no.

I can now write more freely as I said above. I like that freedom.

Dr. Klahn says "You have our.. gratitude! This is a web site of extraordinary magnitude..."