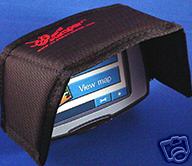 One gripe I've had about the Garmin StreetPilot c340 since day one is that the screen glares like crazy when the sun hits it, making it almost unreadable. Especially in Florida sun. Now while it's true Garmin has (oh-so conveniently enough) introduced the c5* series which has a "daylight readable screen", I didn't exactly want to spend over 400 bucks just for a screen.

The solution is to get a visor. I found one on eBay that was selling for sixteen bucks. Yes, I know it's way too expensive just for a visor, but when you consider that it's either pony up the sixteen or spend 400+ for a new unit, the sixteen seems like a much better option. 🙂

I have no idea whether this will work or not, but I figured it was worth the sixteen to find out. If it does in fact do what it claims (as in "dramatically reduce glare and increase visibility"), then hey, good deal, I won't have to buy a new StreetPilot. And if not, well, I won't cry a river over losing sixteen bucks. 🙂

cold as a witch's teat

Title of this entry is a line from a movie is an old New Englander saying. Well, at least that's where I first heard it.

I checked the weather for Dayville Connecticut (as I do almost daily) at this time of the day, and it's forty-five frickin' degrees farenheit, i.e. COLD. That's thirteen degrees away from freezing and it isn't even October yet. I'd be willing to bet that in less than a month that region is going to get at least a few sub-freezing nights, which will then turn into freezing-all-day days later on as the winter season hits.

The reason I check the weather is to remind myself where I am and how fortunate I am to be here. Make no mistake, I feel truly blessed to be here and have no doubt about that whatsoever.

Here's some things I don't own anymore (all of which I'd have to acquire were I still living in Dayville):

Things I don't have to do any longer:

Things I don't have to deal with any longer:

This list could be a whole lot longer but I'll cut it short there. You get the idea.

Every year on WAAF they play a song which is a parody of Walking In A Winter Wonderland entitled Sick Of F--king Driving In New England. The song is drop-dead funny, but is 100% true on all counts. It just sucks. I never really had any love for winter whatsoever. Snow bunnies love it for the skiing season - but I don't ski or snowboard, so... what's the frickin' point, ya know? Every time I saw a bumper sticker that said Let It Snow!, I wanted to shoot that person point blank in the face with a bazooka - just because I hated winter that much.

I'm totally waiting for the day (which will happen soon) where I check CT weather and the temperature is thirty-two degrees F or lower so I can sit back with a big ol' smug grin on my face knowing I can go outside in a t-shirt and be 100% comfortable. Put it this way, after dealing with New England winters for 30+ years, being here in Florida kicks so much ass it's not funny. 🙂

Title of this entry comes from a song by the weird one. Yeah I know I've mentioned that song here before, but never in an entry title. 🙂

I'll give a dollar* to anyone who can name the movie where the above line comes from.

I successfully transferred all the data from the Maxtor 160GB to the Hitachi 120GB. As far as I can tell everything went smoothly so I'm happy about that. The 120 works fine, is quieter and seems to access data faster. I may have lost 40GB of storage space but at least I have some assurance (hopefully) that my data will be safe for a while.. unless the drive decides to burst into flames.. which would look cool at first until the smoke detector goes off.. followed by a bout of depression that would last a few weeks knowing I lost over 100GB of stuff I wanted to save. But I don't think that will happen. 🙂

Last week I bought the re-released (yet again) editions of the original Star Wars Trilogy (that's episode IV, V and VI, the ones that count). These DVD's include the orignal theatrical releases in addition to the cleaned-up versions. I was happy to get it. Each was $19.99.

Dream situation: I hope one day to find a hot girl who is totally into Star Wars. That would rock. I'd probably marry her. 🙂