heedful of the idiosyncratic nature of life's little intricacies

You know, the more I blog, the more words I learn. And I know for a fact there are several people who read my site who have to look up words I use just to understand what I'm saying. Good. Learn a thing or two. 🙂

And to date, idiosyncratic (which comes from idiosyncrasy) is one of my all-time favorite words.

A sign that karma does work in your favor when wielded correctly:

I asked a girl out to a movie a few weeks ago. She said no. Bummer. Today I met up with her again. Now she wants to go see a movie. I got her phone number and everything. 🙂

But.. here's an indication I'm getting older (and probably wiser): I asked her out because I wanted something to do rather than go on a date with the intention of having sex later. I literally do want to go out and see a movie. As far as what movie it is, I really don't care. I just want to go out.

A(nother) sign that moving to Florida was the right choice:

In less than three months I have met three different girls, two of which I've been on dates with (with third one upcoming), and two of which I met without the use of the internet.

Meeting girls without the use of 'net is a big deal for me, because a good chunk of my brain is still in "Connecticut mode" where it was nothing short of impossible to meet anyone new - and if you did, it was miraculous and cause for huge celebration where you would do the shake-your-pants happy dance.

Over here in FL it just seems, and is, much easier to meet people.

But I still do the happy dance. I'll never stop doing that. 🙂

A sign that perception is everything (and looks count):

When clean-shaven I can pass for under-21 (as in under twenty-one years of age). With scruff or a beard on my face, there is no doubt I'm over-21.

Currently, I'm clean-shaven. When I went to buy cigarettes a little while ago, I was carded (for my non-US visitors, that means age check by driver's license).

However, with the slightest scruff on my face, I'm never carded.

Additionally, a few girls I've dated in the past did not believe me when I told them my age and would literally ask for proof. And yeah, that's annoying. Being carded is one thing. Being asked for proof of age by a date is an accusation that I'm not telling the truth.

A sign that some people just don't get it:

I use body wash when showering. My current favorite is Axe Phoenix. Axe calls it "shower gel". I call it "body wash". Maybe it could be called "the blue goo that comes from the black bottle that you wash yourself with", but that's not quite as catchy.

So anyway, when the subject of washing oneself comes up, I always say that yes, I use the body wash. When I mention this I get one of two reactions. The first is Yeah, I've been using body wash for years, it's good stuff and the second is that all-too-familiar raised eyebrow, followed by Are you metrosexual?

How am I supposed to answer this.

Here's how I'd like to answer that inquiry using the "answer a question with a question" response.

Okay. You think using body wash is metrosexual - so that means you think that any guy who wears cologne is that way, too? It's a scent just like body wash, isn't it? And since cologne is much more pungent than any body wash could ever be, any guy who uses it must be metrosexual, right?

The answer is no, of course not.

People that are in the know use the body wash - and we smell better than everyone else. Always. I've been using the wash for years (even before Axe was introduced to the US) and I've never received a complaint - ever.

Last time I knew, smelling good is always a plus. It doesn't matter how you smell good just as long as you do. So if you and your stinky self want to slap a label on someone just by the way they wash themselves, go ahead.

Doesn't matter anyway, because we still smell better than you do.

A sign that my priorities are in the right order:

Total hours I've watched television in September: Less than ten. Seriously. I find it amazing because there was a time where I would watch five hours of television or more per day.

Here's a fun thing you can do in your spare time. Find out how many hours of television you watch on average per month. Then think of all the stuff you could have been doing besides watching tv. 🙂

So anyway I was browsing the new televisions online. All the retailers are pushing the LCD and plasma screens because that is the latest and greatest tech that's out there. A decent 26-inch widescreen LCD set is about $300.00 at its lowest price not including shipping.

I was thinking about how nice it would be to have a new television to watch my DVD's and whatnot. My 15-inch screen laptop is spectacular at displaying movies, but it's just too small when you're not sitting directly in front of it.

Even though three hundred bucks is cheap, the fact of the matter is that I don't watch movies enough to warrant buying a new tv. Furthermore the money would be better spent on bills. 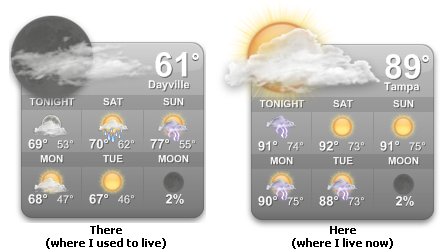 Weather for Dayville Connecticut and Tampa Florida as of 7:30pm, September 22nd, 2006.

Above is one of the reasons I moved here. New Englander friends of mine will see this and instantly think TOO HOT!!, but that's not the case at all because the humidity is waaaaay lower down here.

Up north it's put-on-a-jacket weather already. I usually started wearing jackets right around the time it got to 60° F and would continue to wear one until March. Here in FL it's not even close to jacket weather.

I find it interesting and weird (only because I haven't experienced before) to walk outside in a t-shirt after 6pm and be completely comfortable.. in late September. And I mean completely.

In other unrelated news, my truck got an oil change today along with some new wipers, and I cleaned most of the glass on both my truck and Pop's truck because in all honesty.. it was lookin' kinda grubby. 🙂 But not anymore. Not for a while anyway.

Just recently I reinstalled StarCraft and Diablo II. I forgot how cool these games were and have been polluting my brain appropriately by playing them from time to time. 🙂